Palestinian artist Hanaa Hamash pays homage through her artworks to the Palestinian women living under occupation. 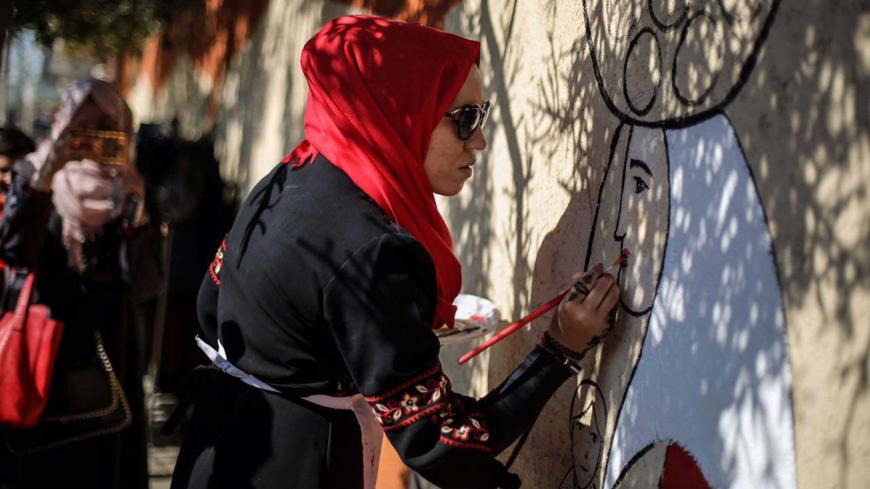 GAZA CITY, Gaza Strip — For Hanaa Hamash, art is about expressing herself and giving a voice to the suffering of Palestinian women. The exhibition Dec. 20-22 in Gaza City, titled “13 Million,” symbolizing the number of Palestinians around the world, focused on the strength of Palestinian women who live in harsh conditions under occupation.

Hamash, 27, told Al-Monitor, “I wanted to convey two messages. First, I wanted to send a message of love to all Palestinians who find themselves dispersed in different countries around the world as a result of the Palestinian Nakba in 1948, and to emphasize that the Palestinian people are still united, despite the distances. Second, I wanted to embody the historical role of women in serving their people and their struggle against the Israeli occupation."

She added that Palestinian folk songs played throughout the exhibition.

The exhibition, which consisted of 50 paintings, portrayed Palestinian women in different eras. Some of the artworks show the women's traditional lifestyles in the cities that became part of the State of Israel after 1948, such as Jaffa and Haifa, with paintings of women dressed in embroidered outfits and scenes of women farming or sewing. Other works highlight their struggle during the Israeli occupation of the Palestinian territories in 1967, including one showing an Israeli soldier pointing his gun at the face of a Jerusalemite woman.

Hamash’s portraits, some in black pencil and others in oil paint, also feature Palestinian women who are known for their work in various fields prior to the establishment of the State of Israel, such as Mateel Abboud, the director of a public school in Nazareth; Basima Farah, the director of the Jerusalem School for Girls; and Karimeh Abbud, the first female photographer with her own studio in Palestine in the early 20th century.

Hamash also highlights the role of women in resisting the Israeli occupation with the portrait of Nahla al-Bayed, the first Palestinian detainee in Israeli jails who was arrested in 1968 for her affiliation with the PLO.

In most of her paintings, Hamash intentionally used dark, earth colors, with blacks and tones of gray, to convey a message about the bleak and harsh life of Palestinian women.

Hamash explained that this exhibition followed the Dec. 6 decision of US President Donald Trump to recognize Jerusalem as the capital of Israel, adding, “I have painted many drawings illustrating Palestinian women's historic life in Jerusalem, in defiance of the Trump decision."

She also criticized the male-dominated society she lives in and explains that art gives women a voice. “Art gives women an opportunity to be heard within society, given the fact that they are often marginalized, their opinions ignored and with little political participation,” she said. “Art gives us an opportunity to speak out even when no one wants to hear our voices.”

Maram Hameed, a student at the Department of History and Archaeology at the Islamic University in Gaza, who visited the exhibition, told Al-Monitor, “I am happy to see such art here [in Gaza]. I was particularly intrigued by the portraits, especially since they … introduced me to famous Palestinian figures that I had never heard of before.”

Art enthusiast Ali Yaacoub told Al-Monitor, “This exhibition is one of the best I have seen. It highlights the lives of Palestinian women in peace and during war; it combines how beautiful they are and how important their roles are as mothers, teachers and fighters resisting the occupation.”

Hamash has previously participated in several art exhibitions in the Gaza Strip, such as “Gaza 52” in April 2017 that focused on the suffering of women during the 52 days of the Israeli war on Gaza in 2014.

Issam Hillis, the president of the Palestinian Association of Artists in Gaza, an independent association founded in 1984, told Al-Monitor, “Women are now playing an active role in the Palestinian artistic movement. We have 264 female artists in our association, which is more than half of the total number of members that amounts to 483 artists.”

Hillis explained that Hamash has succeeded in making her mark through her artwork that combines creativity with a female viewpoint, receiving broad acclaim in the local community.

He said that there are several reasons for the participation of women in art exhibitions, namely to highlight their talent, prove their role in the development of art and push the community to respect them and give them more space to prove themselves outside the confines of their homes, to which their role has long been limited.

Hillis stressed that Hamash has proved herself despite the small number of art associations that support artists in a sustainable way.

Mustafa Zakout, the director of the Ro'ya Center for Studies and Searches in Gaza, an independent center created in 2015, which sponsored the exhibition, said that although the research center was not focused on art, they had been willing to support the exhibition because of the limited platforms that support artists in Gaza.

Hamash said she wishes that artists, especially female artists, had access to an independent platform with a government-subsidized budget to promote women's art in the Gaza Strip.