Young female artists in Gaza are finding themselves stuck between economic woes and social constraints, leading many to forgo their passion to paint. 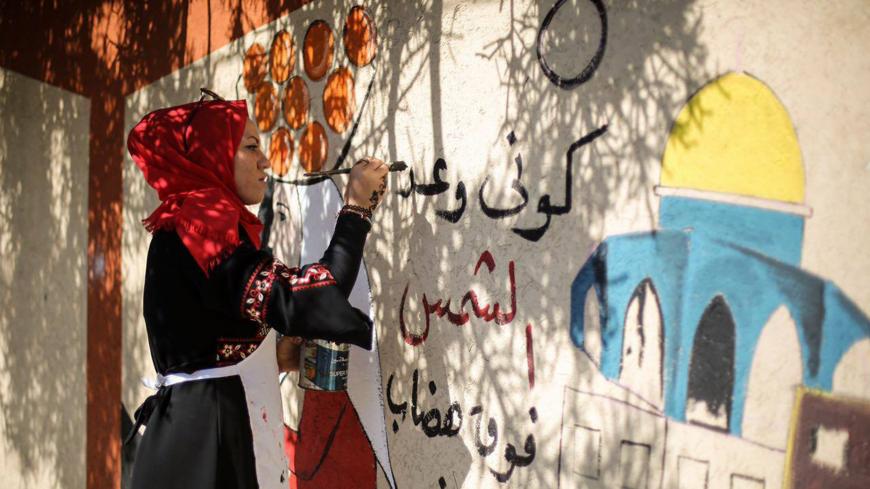 Hanaa Hamash, an artist from Gaza, paints a mural on the wall. Posted March 10, 2017. - Facebook/hanaaahammash 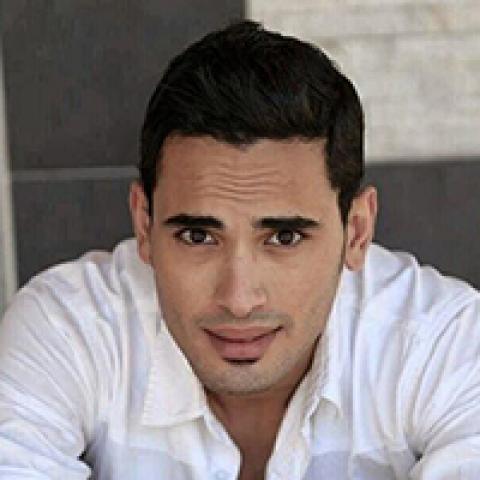 In the cash-strapped Gaza Strip, many budding female artists have abandoned their paints and brushes in pursuit of studies they hope will someday land them solid jobs. Art has thus become one of the many casualties of economic uncertainty in Gaza, with painters fearful that their art will not provide them a livelihood, much less social respect.

Nour al-Hoda Hourani, an amateur artist from Gaza City's Zahra neighborhood, told Al-Monitor that she has been drawing since childhood. She did so with the support of her family, but when it came time to select a university, instead of studying fine arts, she opted for something more likely to land her a job after graduation. That decision led her to enroll three years ago at the Faculty of Architecture at the Islamic University of Gaza.

Explaining her choice, Hourani said that it is difficult to make a living from art, in her case by selling paintings in Gaza, because for a majority of the people, art is a luxury given that they are living hand-to-mouth.

“I had participated in many joint art exhibitions in Gaza but never had the opportunity to further my skills by interacting with artists abroad,” Hourani said. “Due to the restrictions on movement [for people] in Gaza, I was unable to attend international exhibitions and get to know other cultures, art forms and artists around the world.”

Hourani also remarked that having a career in art is more difficult for women than for men. “The female painters in the Gaza Strip number no more than two dozen,” she said. “This is a small number, as there are many talented women. The number of male painters is twice as many.”

Samar Saleh, an artist from the Nasr neighborhood, in western Gaza City, also opted for a non-art-related career. She is currently studying at Al-Azhar University’s Faculty of Science. Saleh told Al-Monitor that she had started painting around age 12 even though painting supplies had either been difficult to come by or too expensive and art lessons and incubators mostly non-existent.

Saleh continues to paint as a hobby and has participated in several joint exhibitions, including “Flowers of Martyrs,” a display of works to protest US President Donald Trump’s decision to move the US Embassy to Jerusalem last year.

“In Gaza, people believe that girls who are interested in art are wasting their time,” Saleh told Al-Monitor. “There are quite a few girls who are being oppressed by their own families and society because of the traditional view of women, whereby women should not mix with men during art exhibitions or engage with the media to promote their art. Social constraints — doubled by the lack of support in the family — and economic woes eventually cause prospective artists to give up or cause their talents to dry up.”

Hanaa Hamash, an artist from Gaza who currently lives in Turkey, told Al-Monitor that her path had been paved with difficulties, including a lack of support and incentives. Hamash, who holds a bachelor of fine arts from Al-Aqsa University, explained that she began her art career in 2007, when she was admitted to the university and gradually began organizing local exhibitions, showing her work in galleries and painting public murals. She eventually took part in international exhibitions in the United States, Ukraine, Egypt and Turkey.

“Young girls who show an interest in the arts and continue to work on their talent are usually children in families that had lived outside the Gaza Strip before the first 1987 intifada,” Mahmoud Jouda, a writer, activist and researcher of Gaza’s social fabric, told Al-Monitor. He explained that this group was influenced by the culture of the countries where they had lived for a time and somehow felt less bound by the usual social constraints in Gaza.

“Others usually let go of their artistic activities once they reach the age of 14, which is when they start being pressured by society and become stigmatized because some forms of art are considered bad for girls in the community,” Jouda said.