As life struggles to return to normal, artists there express the pain and suffering Gaza experienced in the war. 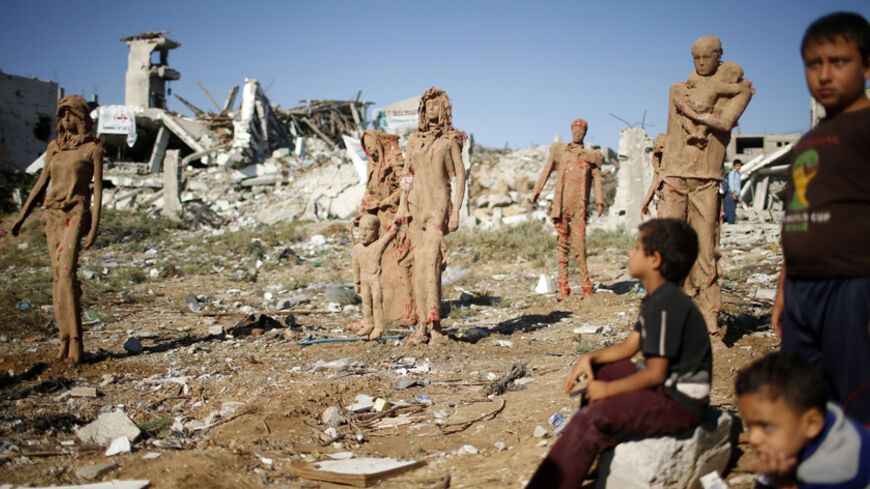 Palestinian boys look at Palestinian artist Eyad Sabbah's statues depicting Gazans who fled their homes from Israeli shelling during the most recent conflict between Israel and Hamas, in the east of Gaza City, Oct. 21, 2014. - REUTERS/Mohammed Salem

The latest Israeli war has energized the Gaza art world, and artists there are expressing their suffering with aesthetics and creativity through live shows and comedy acts.

Visual artist Eyad Sabbah has breathed life into the areas destroyed by the occupation in the Shajaiya neighborhood, in the east of Gaza. To capture scenes of suffering and destruction there, he carved statues that reflect the pain of the inhabitants during the war, as well as their displacement. His work is displayed on a small piece of land surrounded by ruined buildings on every side, including Wafa Rehabilitation Hospital, which was reduced to dust.

Visitors to Shajaiya, which suffered the highest displacement and the fiercest destruction in the Gaza Strip in the last war, smell the stench of death in every alley and see its ghost in the eyes of the residents. Life in this neighborhood has wasted away completely. The inhabitants have been demoralized and the buildings and infrastructure have been destroyed.

Sabbah, who also lectures at Al-Aqsa University in Gaza, told Al-Monitor, “The project I started directly after the war and named 'Worn Out' lasted for around a month and a half," calling it “open space installation art.”

He said, “After the war, I started thinking of a way to directly touch the people to express the tragedy they experienced. I called the project “Worn Out” because it’s linked to the prevailing psychological state of the people and the destroyed buildings and infrastructure. As soon as you enter Shajaiya, you notice that everything is worn out.”

Sabbah believes that artists mirror the times they live in, as well as their country, and that all Gaza artists have been affected by the war and its tragedies. He expects every artist to have a project or work plan related to war, saying, “The war impacts artistic production and all aspects of life. The wave of displacement from Shajaiya is terrible and we were all affected by it, although the same happened in all regions of Gaza. However, the situation in Shajaiya projected different scenes compared to other regions.”

Sabbah, who was himself displaced from his home in Sudaniya, in north Gaza, where the situation was heated, used fragile materials not usually used in sculpting such as fiberglass, clay and wood. He molded his statues with them to express the delicateness of the topic.

The last Israeli war on Gaza created a new wave of creativity among various artists. Creative ideas intermixed with suffering to produce a unique approach, as the artists themselves were part of the story.

Artist Hana Hamash, 24, was deeply affected by the war, as was her work. She was displaced from her house, which was badly damaged. Her studio was wrecked, and rocket splinters penetrated several of her paintings. Hamash set up an exhibition under the name “Gaza 52,” symbolizing the first day after the end of the Israeli war, which lasted for 51 days.

“On the 52nd day, life returned to normal, but suffering awaited us. We only realized that later. The exhibition talks about the suffering of women and children, in particular, during the war and takes on the topic of national unity,” she said.

Although Hamash lost her studio and all her painting supplies, she worked with supportive youth organizations to restore them and build a new exhibition of around 25 new paintings and old ones that were struck by rockets. Hamash, who has displayed her work in several collective and individual exhibitions in Gaza, the United States and Egypt, noted that she dedicated a large space of the exhibition to the Israeli war on the Gaza Strip and to the suffering of the people.

The artworks not only expose the suffering of the people, but are also used to display suffering in a humorous way and thus alleviate it, just as the theater can. Raafat al-Aidi, CEO of the Ayyam al-Masrah organization in Gaza, said the war left strong and deep psychological marks on children and all social classes. He said it was important to act quickly, because the residents needed to express what they had faced during the war.

Aidi, a working actor, director and writer, told Al-Monitor, “We started showing theatrical performances immediately after the war in four schools. The shows were ready after the 2012 war, and we found them suitable for the period following the recent war also. Each comic theatrical performance was followed by a drama workshop to help children express their feelings and thoughts.”

The shows, presented by an elite cast of Palestinian comedians, reached around 55,000 children, in addition to around 2,000 adults, including visitors, teachers and parents.

Aidi said the dramatists returned to the stage with more energy than before the war. They were alive and brought with them many memories, and started turning a huge reservoir of ideas into plays.

“We are currently preparing for a huge theatrical production under the title 'Construction' and working to rebuild the morale and life that the war destroyed. Within a couple of days, the theatrical shows will start to play in public schools and the United Nations Relief and Works Agency for a whole week,” he said.

Regarding the effect of theatrical arts and the impact of their message, Aidi said that the project also targeted Europeans in a short play titled “A summer holiday in Gaza,” which was performed intensively in Belgium for three weeks. The play addressed the suffering of Gazans during the 51 days of war and had a huge impact on the Belgian people.