Loss, fragmentation on display at the Palestinian Museum

"Intimate Terrains," the current exhibition at the Palestinian Museum, displays works by artists from different generations united in their sense of longing, loss and nostalgia. 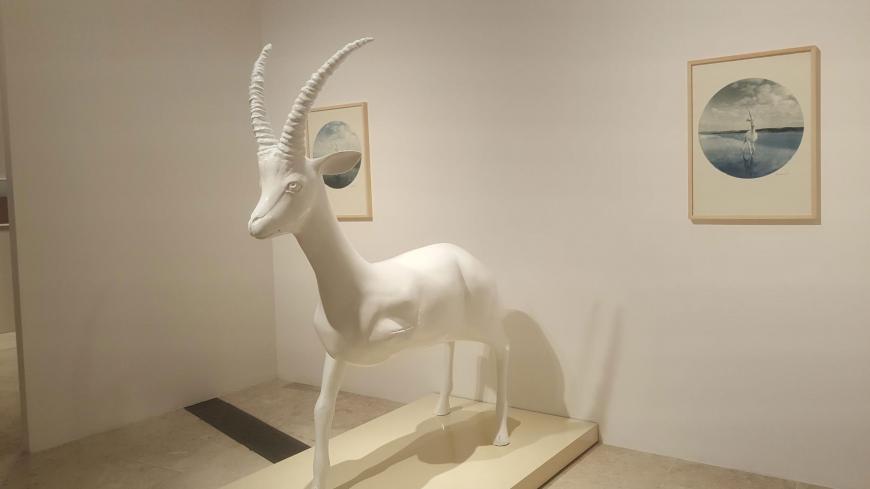 Manal Mahamid's sculpture of a gazelle with an amputated leg is shown at the exhibition “Intimate Terrains: Representations of a Disappearing Landscape," Birzeit, West Bank. - Ahmad Melhem

RAMALLAH, West Bank — Six long skeletal objects — thin, dark and dried up — hang from the ceiling in a small room plastered with maps of Palestine. These dried pieces of cactus, strung together and hung by thick black thread, cast dark shadows on the maps. The dark, shadowy and slightly eerie installation by Rana Bishara, aptly called “The Roadmap of Elimination,” is part of “Intimate Terrains: Representations of a Disappearing Landscape,” the current exhibition at the Palestinian Museum, in Birzeit.

“The cactus has always been part of the natural landscape in Palestine,” Bishara told Al-Monitor. “[It] has been used to fence our agricultural lands and villages for decades.”

Bishara said the dried cactus also represents the visual and psychological distortions that Palestine has experienced. For example, she pointed out, the separation wall and the settlements have eliminated all sorts of social and geographical bonds.

The work, with its many messages, also expresses the artist's discontent with the peace process between the Palestinians and Israelis. According to Bishara, this process has, as evidenced by the maps — drafted by the United Nations Office for the Coordination of Humanitarian Affairs and the BADIL Resource Center for Palestinian Residency and Refugee Rights — has led to the dispersal, fragmentation and transformation of Palestinian land into cantons. The fragments of dried cactus interwoven with dark threads, Bishara said, are an expression of trying to hold thee cantons together through heritage and culture at the least. 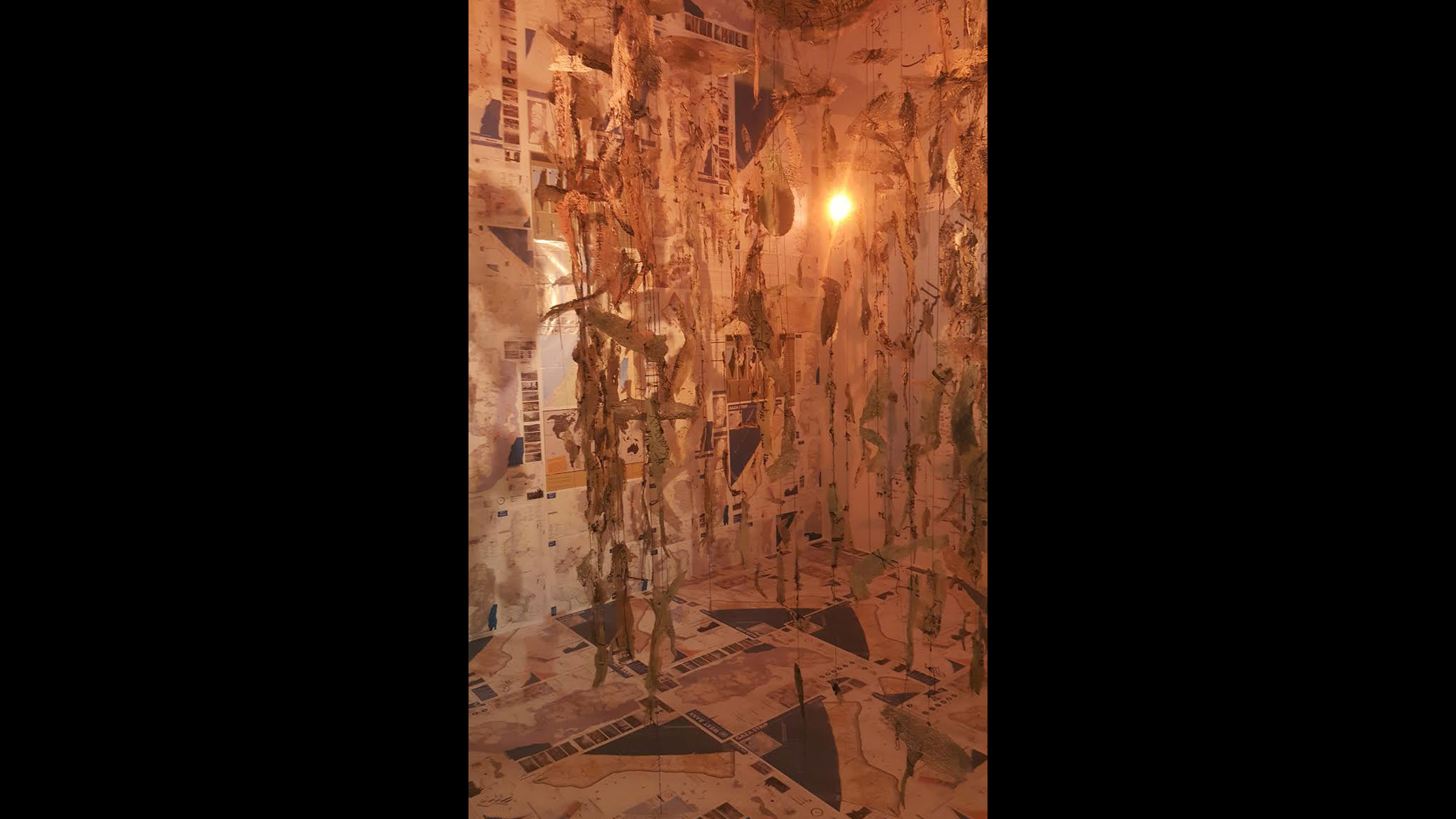 “The Roadmap of Elimination,” an installation by Rana Bishara, consists of maps of Palestine and hanging dried cactus, a symbol of loss, Palestinian Museum, Birzeit (Photo by Ahmad Melhem)

Bishara's work is among more than 100 artworks exhibited in “Intimate Terrains,” which opened this spring and runs through December 31.

The exhibition, one of the largest ever presented in Palestine, includes several generations of artists, most of whom tackle issues like motherland, nostalgia and the sense of belonging, fragmentation, archaeology and changing natural landscapes.

Lama Takruri, assistant curator of “Intimate Terrains,” told Al-Monitor that the exhibition is inspired by the tremendous amount of changes that have taken place in Palestine over the years due to Israeli policies and as a result of the expansion of Palestinian cities.

Three oil paintings by Tawfiq Jawharieh from 1930 are the oldest works in the exhibition. Their idyllic landscapes of natural beauty, featuring lakes, cypress trees and the sea, probably only existed in the imagination of the artist, created by longing. The depiction of clear lakes and the sea reflecting moonlight show the influence of Western landscape painting on Jawhariya’s style, Takruri explained.

“Drought,” by Sliman Mansour, dominates a wall of the museum. The colorless mosaic consists of hundreds of pieces of dry mud affixed to iron wires in the shape of a human figure, possibly a self-portrait. The huge work, embodies “fragmentation and erosion of the Palestinian landscape,” said Takruri.

“The Palestinian Gazelle,” by Manal Mahamid, is one of the most photographed works on display. The large gazelle, made of fiberglass, has an amputated leg.

“In the Israeli zoo, Mahamid saw what Israel claimed were ‘Israeli gazelles,’ and many of them had amputated legs due to what they said was a disease that affected their limbs,” Takruri explained, “This sculpture symbolizes the Palestinians, … who lack liberty, freedom of movement.”

Tina Sherwell, an artist and historian, spent two years curating the exhibition, including research on artists’ perceptions of the land and the Palestinian landscape. After having selected artists and works to exhibit, gathering the pieces was a time-consuming endeavor, Takruri said, due to Palestine's complicated situation. In the Glass Gallery, visitors can find information on the politics that contributed to the creation of the artworks and conceptualization of the exhibition, including a collection of publications, wall text, charts and a chronology of events.