The “Baalbek: Archives of an Eternity” exhibition collected an unprecedented number of objects from the ancient Lebanese city, exploring the interplay of power and people through the millennia. 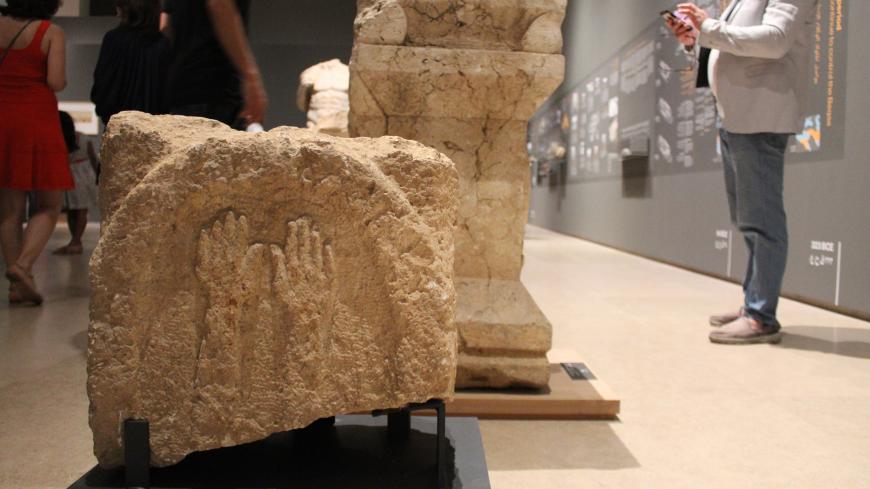 A photograph of Roman ruins at the "Baalbek: Archives of an Eternity" exhibition, held at the Sursock Museum, Beirut, Lebanon, June 27, 2019. - Sam Brennan/ al-Monitor

“The expression of power and of sacred practice into the physical and mercurial form of these glorious temples [in Baalbek] … is too big and too heavy to be human,” Vali Mahlouji, curator of the iconoclastic exhibition “Baalbek: Archives of an Eternity,” told Al-Monitor.

“As grand as [Baalbek’s temples] are, they suppress 7,000 years before it … and it evicts the town [currently there] — it pushes it out,” he said, adding that this is why it was interesting as a power and authority symbol.

The exhibition, on display at Beirut’s Sursock Museum, displays a timeline of the vast history of Baalbek, where continuous human settlement dates back nearly 10,000 years. Intertwined into this timeline from the Neolithic era to the modern day, were documents, photographs, artefacts and artworks.

Forty kilometers (25 miles) from the modern Syrian border, Baalbek was built on natural springs, which feed the Assi and Litani rivers. Mahlouji explained that the springs would regularly flood and “effectively create an oasis city.”

This almost supernatural occurrence saw religion intimately tied to the land, with the name of the city itself derived from “Baal” meaning “Lord,” as well as the highest god in the Aramean pantheon, and “Nbk,” which means source or spring.

The exhibition also showcased pottery fragments dated as far back as 8700 B.C., which are thought to be votive offerings, given to gods for fertility, health and protection.

Baalbek is popularly known today, however, for its Roman temple complex, which includes the amazingly well-preserved Temple of Bacchus, the almost-baroque Temple of Venus and the Temple of Jupiter, which is one of the largest temples in the Roman world.

Roman colonization of the Middle East began in 64 B.C. with General Pompey’s victory against the Seleucid Empire. While Baalbek was situated in the fertile Bekaa Valley, the building of the temples was still a strange and costly move by the Romans.

“One of the unfathomable things about the massiveness of the Roman structures is that it would have made sense for them to make it somewhere else, where the ground was less patchy and the rock foundation was more solid,” Mahlouji noted.

But geographical convenience was a small price to pay to show Roman power, as Mahlouji explained. “The Romans claimed the history of the sacredness. … We don’t know what structures were there for cultic purposes but we do believe they were there and that they were absorbed into the much grander Roman structures,” he said. 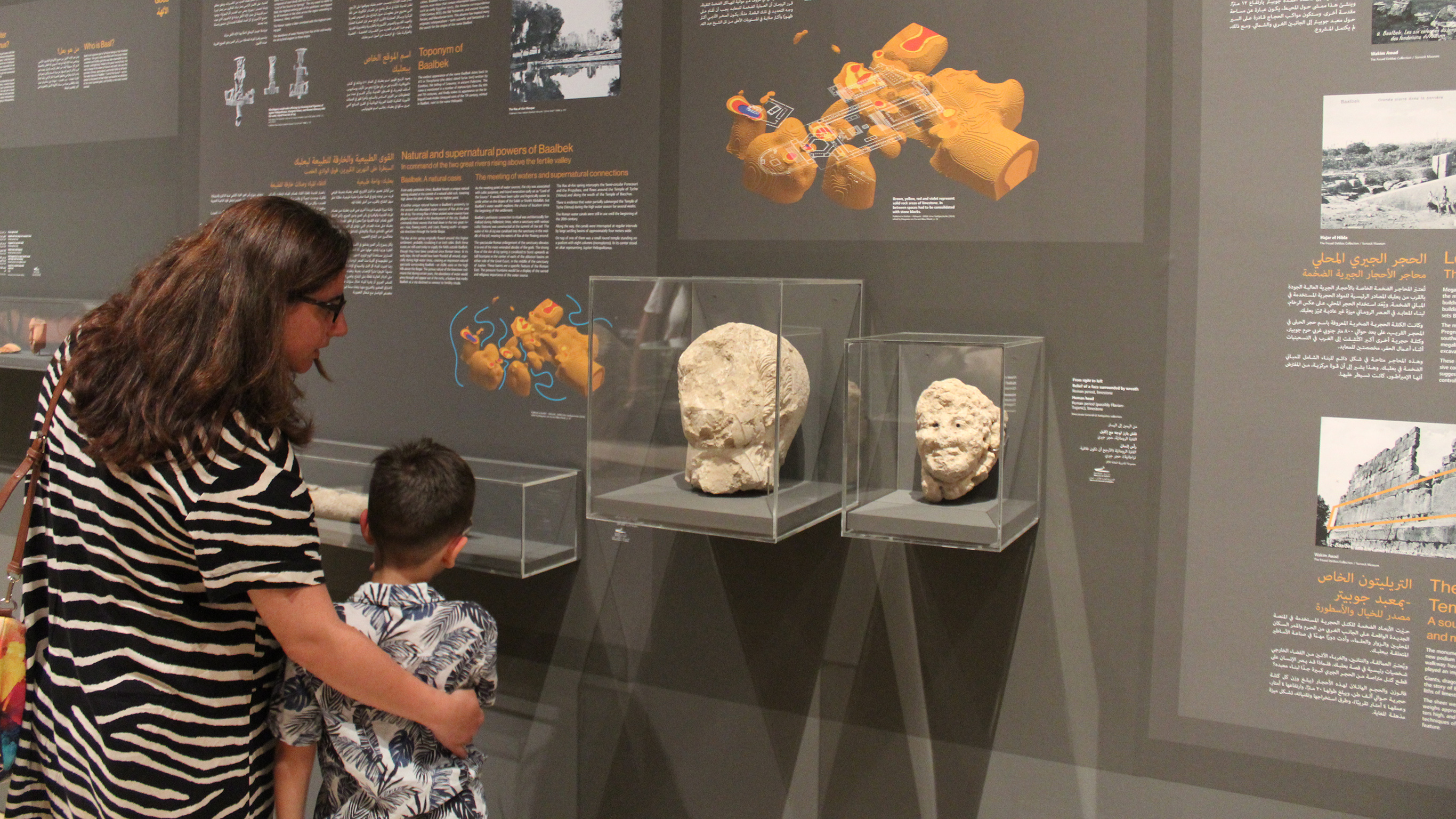 An audience member examines artifacts from the Roman era at the Sursock Museum, Beirut, Lebnanon, June 27, 2019

Built over 2½ centuries, the temples were not only constructed to co-opt the previous religious sites but to show Roman strength in their new eastern province.

However, with the Roman Emperor Constantine’s conversion to Christianity in 312, the site drew less attention, representing heretical polytheism. By 395, the large Temple of Jupiter under Theodosius I was destroyed and replaced with a church.

Baalbek would continue to be co-opted through the Muslim conquest of Syria, European invasion during the Crusades, Mongol occupation, Ottoman expansion and even the world wars. Throughout all this, the people of Baalbek endured and the temples, while impacted, remained.

The scope of this history, stretching back to the formation of human civilization and the grandeur of the temples made the site attractive to 19th and 20th century Europeans, obsessed with idealized notions of Rome and the Orient.

This was shown at the center of the exhibition through dozens of romantic European paintings and photographs of the ruins of Baalbek.

“[The artworks focused on] the ‘purity of the stones,’ not living, not the real people or the real city, but the stone itself as a manifestation of glorious origins,” Mahlouji noted.

He pointed to the irony of this interpretation as the limestone bricks used in the temples, some of them weighing 1,000 tons each, came from the land of Baalbek itself, rare for Rome that would often import marble for its temples.

This view of Baalbek’s ruins as a historically detached symbol of a bygone glory laid the base in the 20th century for the new Lebanese state to — like many before — co-opt the city into its own myth-making.

"The ground was already prepared by the European desire to classify, order and ultimately claim … [for Baalbek to be] absorbed into the national identity of Lebanon,” Mahlouji said. “It is anchored to a universal history that Lebanon was eager to claim."

This view of Baalbek, not a living city but a powerful symbol, was shown at the exhibition through newspaper articles and interviews from 1959 with Lebanese statesmen such as Henri Pharaon, who wanted to evict all of Baalbek’s residents and turn the city into a giant museum.

While this never came to fruition, the final area of the exhibition has a map indicating where current Baalbaki citizens have been pushed out and fenced off from the temples.

The International Baalbek Festival, which takes place inside the Bacchus Temple from July 5 to Aug. 3, partnered with the exhibition. The festival, created by President Camille Chamoun in 1956 as part of the nationalization of Baalbek, has played a vital role in fostering the cultural and artistic scene in the region being the first event of its kind in the Middle East.

Nayla de Freige, president of the festival, told Al-Monitor the event sought “to make the stones alive … the cultural importance of the festival is to bring people [to Baalbek] and to create close contact with the local people.”

She added that in 2018 some 1,500 free tickets were given to locals and the event encourages integration with the city. “We don’t want artists to open their luggage, perform and go,” De Freige said. "I hope the people don’t just stay at the [ruins] but go into the town and see the marvelous places there.”

However, Mahlouji, ever critical, sees the festival as another extension of power, using Baalbek as a symbol, not a city. “The festival was created completely in the national narrative and that’s what is disconnecting. … You cannot say you are going to activate the temple for the people — it already belongs to the people,” he said.

The exhibition presents Baalbek as a focal point of power, the grandeur of its history used by empires and states alike to further their own aims, detaching the monuments from the people who built, interacted and still live among them, creating a city removed from humanity, not an unbroken continuation of it.