The grandson of Kegham Djeghalian, a survivor of the 1915 Armenian genocide and founder of the first photography studio in Gaza, recently organized an exhibition with the negatives he found three years ago. 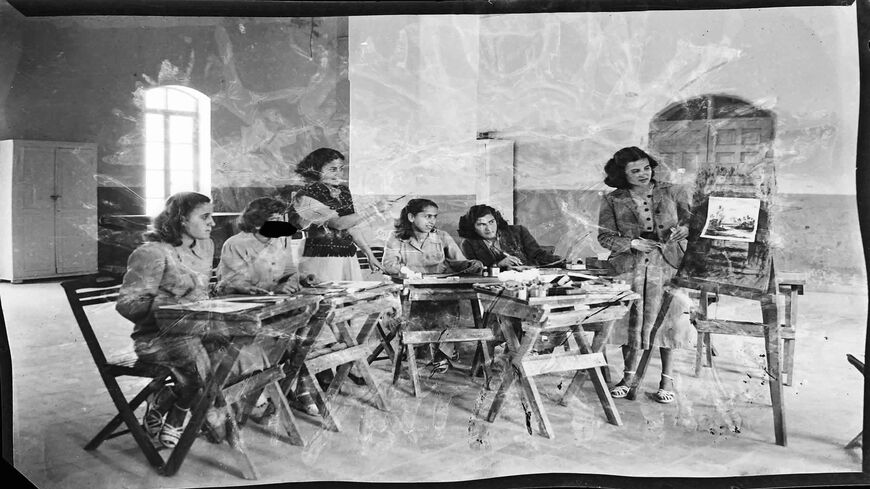 Girls are seen in class at a home economics school, Gaza Strip, around 1947. - Kegham Djeghalian

In 2018, the artist and academic Kegham Djeghalian found three small red boxes that his father had left in a closet in his apartment in Cairo. Each box contained, with no apparent logic, a collection of different negatives from the 1940s up until the 1970s. The photos were taken by his grandfather — also called Kegham Djeghalian — whom he had grown up hearing stories about on how he was the most important photographer in the Gaza Strip, but without never actually seeing his work. Djeghalian decided to take the 1,100 negatives to Paris, where he lives, and started to scan and process them.

Last March, Djeghalian curated an exhibition addressing the legacy of his grandfather, the first professional photographer in Gaza. His aim was to explore the visual history of the Gaza Strip. The exhibition took place during Cairo Photo Week, a photography festival held in downtown Cairo.

“This project has been haunting me for almost 12 years. I took two steps and then took 10 back,” Djeghalian told Al-Monitor. “What got me interested is to study Kegham without engaging in [proper] archival work — because there is no archive, there is a legacy,” he said.

A young survivor of the 1915 Armenian genocide, Kegham grew up across different cities of the Levant and moved to Palestine when he came of age. There he worked in a number of jobs before he got married in Jaffa and decided to settle with his wife in Gaza, where he founded its first photography studio — Photo Kegham — in 1944. The studio, Djeghalian noted during the exhibition, evolved into a key institution in Gazan society, as Kegham became widely regarded as the godfather of photography there. He inscribed the photographic history of Gaza for almost four decades. Kegham passed away in 1981.

“The importance of my grandfather — beyond being the first photographer in Gaza and [its] main documenter — [is that] he was trusted by its people. … They let him in their homes, weddings, funerals. He became the emblem of a photographer in a city,” Djeghalian said. “Gaza is very closed. You don’t have many foreigners. It is not like Jerusalem, a crossroad of all kinds of travelers and residents. And so, for an Armenian to come and be accepted so deeply and so genuinely … that is quite a testimony.”

“And what’s interesting about the time period is that he was there pre-1948. There was no Israel. We are talking about Gaza under the British Mandate. [He witnessed] Gaza in 1948, the Nakba and war. Then Israel was established, and Gaza came under Egyptian rule. In 1956 there was the invasion of Gaza by Israel, just for six months. This was very much documented. Then, under Egypt. And then Gaza was occupied in 1967,” he said. “These are the most critical points in the modern history of Gaza, and he was there all along.”

The 1,100 negatives that Djeghalian found in the boxes in Cairo mainly included photos from the 1950s and 1960s, some from the 1940s and only very few from the 1970s. At the beginning, he approached them as a very formal archival work, unboxing the negatives, scanning, indexing and dating them, and examining and grouping the material. But he soon got overwhelmed by the idea of curating a small family archive.

From then on, Djeghalian explained, he opted to engage in a raw confrontation with the photographs, in a “disruptive” reading that he believes generates an ambiguity that preserves the affective and the nostalgic and, at the same time, acknowledges the disrupted narratives and contexts that surrounded Kegham and his photos. He also decided not to restore the negatives in order to keep a decay that he considers “beautiful and poetic.”

Reaching Kegham’s archive in Gaza, Djeghalian said, proved to be impossible. He explained that, when Kegham died, his family offered his studio to his apprentice, Maurice, who preserved the legacy until he, too, passed away. Maurice’s brother, who had nothing to do with photography, took over the studio, which he never continued, and the archive, which he has totally monopolized and neglected ever since, according to Djeghalian.

At the exhibition in Cairo, Kegham’s work was divided into four themes. The first two focused on his professional practice and his socio-political engagement, first by revealing his studio practice and then mapping the practice of a photo documenter in Gaza, which includes landscapes, weddings, parties, the presence of Egyptian rulers, schools and refugee camps. The third one was dedicated to the family album, which Djeghalian said also serves as a kind of socio-geographic reading of Gaza at the time. The last one displayed some of Kegham’s key photographs through a Zoom call between Djeghalian, in Cairo, and the current owner of most of Kegham’s archive, in Gaza.

Alia Rady, the exhibition’s assistant curator, told Al-Monitor, “The Gaza Strip was not documented like other places in Palestine. Kegham was the first and only photographer in Gaza for a while, and his archive is, by far, the largest we have to date. I think this archive is [a] narration of a place that does not exist in the same way it did. It is a documentation of places and people that mostly do not exist anymore, and it is a visual to the stories we hear about the Gaza that we never saw."

Djeghalian concluded, "This is visual history of a [place] that is underdocumented, and thus problematic. It is a history of a contested country, very disruptive, problematic and contested. In Egypt, there is a perception of Gaza that is constructed by what we are getting from data, visuals, stories. It became this black spot in the Middle East and in the Palestinian territories. What was amazing is that most people who visited the exhibition were unsettled by this confrontation with the history of a [place] that is so badly constructed, at least in their imagination."