Early members of the Zionist movement and later Israelis have consistently attempted to control the narrative of the conflict with the Palestinians, including by seizing photographic evidence of Palestine and the Palestinians' history. 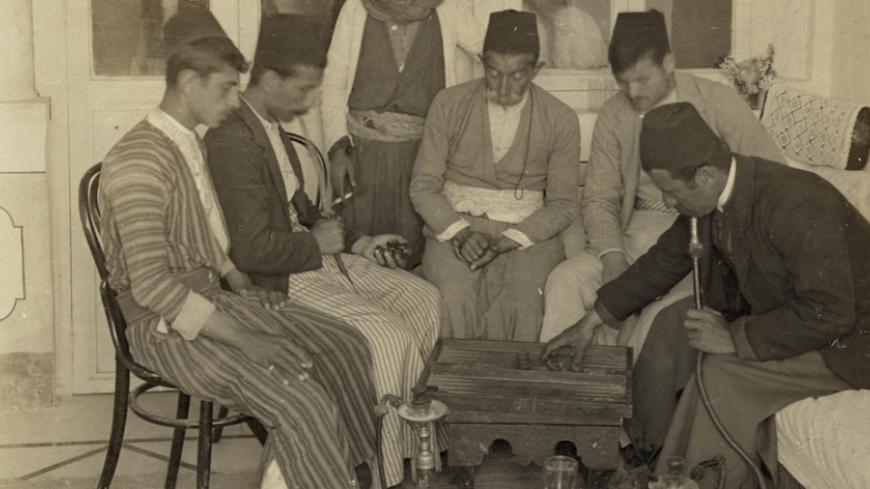 Residents of Nazareth playing backgammon and smoking narghiles, circa 1903. - GETTY/Buyenlarge

It has been said that a picture is worth a thousand words. In the Palestinian-Israeli conflict, an image can also be as dangerous as a cannon. This appears to be the conclusion reached by two women, one Israeli and the other Palestinian, who have dedicated most of their lives to researching images related to the conflict and their use and fate.

Rona Sela, a curator and lecturer at Tel Aviv University, recounted to Al-Monitor how she first became involved with these images 20 years ago. “I was doing research in the mid-1990s,” she began. “My focus was an analysis of Zionist photography in the early stages of the state of Israel. I researched the way institutional Zionist propaganda departments from the 1920s to 1948 used visual images to construct a national identity to build people’s consciousness about national issues. As the Palestinian narrative was, in most cases, missing from the Zionist one, I started searching for Palestinian images.”

Early on in her research, Sela found a large group of images by the photographer Khallil Rasas, whose work was not known but had been looted from his studio in Jerusalem. Rasas’ images of Palestinian life during the first half of the 20th century, never made public, often contradicted the official Israeli narrative. Sela published a few texts about Rasas and his work as well as other Palestinian photographers active in Palestine in the 1930s and 1940s.

Sela explained, “In the beginning, it was accidental that I came across traces of the looting, but then I started deliberating trying to find more material that was plundered and to understand what the meaning of these images was and how they fit into the larger narrative of the conflict.”

Another Sela discovery was a pre-state Zionist project called Village Files, Aerial Photos and Surveys. Sela went public with her research in 2009 and later published it in the Jerusalem Quarterly in 2013.

The project involved detailed documentation of pre-1948 Palestinian villages in which the Jewish underground was interested. The Village Files included photographs and surveys of most of the 418 Palestinian villages that have since been demolished or repopulated by Zionists after the Nakba. According to Sela’s published research, many of the images were taken from the air by young Jewish couples often posing as tourists taking romantic flights over the villages. In fact, they were documenting the area and providing the photos to the Jewish underground.

The images were to have been kept secret to prevent the possibility of comparisons between before and after photos. Sela believes that the secrecy behind Israeli efforts to hide the images is part of an attempt to protect the monopoly enjoyed by the Israeli narrative. She remarked, “From my experience, correspondents, talks and processes, it is very clear that Israel is interested in one narrative prevailing.”

Sela has published numerous articles on the subject, held exhibits and produced films detailing what she has unearthed. Sela’s publications and exhibits, as per her website, include “Photography in Palestine/Eretz-Israel in the 30s and 40s” (2000), “Six Days and Forty Years” (2007), “The Absent-Present Palestinian Villages" (2009), “Made Public — Palestinian Photographs in Military Archives in Israel” (2009), “Chalil Raad, Photographs, 1891-1948” (2010), “Effervescence (Unrest) — Housing, Language, History — A New Generation in Jewish-Arab Cities” (2013) and “Rethinking National Archives in Colonial Countries and Zones of Conflict” (2015).

Sela’s most recent essay, “The Genealogy of Colonial Plunder and Erasure — Israel's Control over Palestinian Archives,” focuses on two archives: those of the Palestinian Research Center and the Film Center of the Palestine Liberation Organization’s (PLO) Media Department, both of which were stolen by the Israeli army after invading Beirut in 1982. Published in March 2017 in the “Journal of Social Semiotics,” Sela’s article reflects on what she calls a “characteristic of colonial archives,” describing “how the ruling state plunders/loots the colonized’ archives and treasures and controls them in its colonial archives — erasing them from the public sphere by repressive means, censor.”

According to Sela, she has a forthcoming article on the looting of the films in Beirut in the academic journal “Anthropology of the Middle East,” and an essay about Rasas is also in the works.

Researching and attempting to publicize looted Palestinian imagery has also been a passion of Azza el-Hassan. When the Israeli army looted the Palestinian film archive, Hassan, a Palestinian documentary filmmaker born into a PLO family, was 11. She recalled that Hiba Jawharia, daughter of the Jerusalem-born Hani Jawharia, who filmed much of the material for the PLO’s film unit, had been a childhood friend of hers in Beirut. Hani was killed on April 11, 1976, while filming in south Lebanon, leaving Hassan and her friend forever shaken.

Hassan went on to study at the University of Glasgow, where she obtained a BA in film in 1994, and a year later obtained an MA in television documentary from the University of London. After concluding her studies, she was able to move to Palestine with the signing of the 1993 Oslo Accord. She related to Al-Monitor how the story of the missing archives — including the footage shot by her childhood friend’s father — never left her. Hassan ultimately decided to trace what had happened to the films.

Before the Israelis arrived in Beirut, some of the films had been collected at the last moment and hidden in different homes and locations. Most, however, were seized by Israel and are now in its army's archives. Hassan decided to embark on a journey that would eventually take her to Lebanon, Syria, Jordan, Palestine and Israel in search of the missing material. She documented her adventure and search in “Kings and Extras,” a 2004 German-Palestinian production.

A 2006 review of the film by the author Maymanah Farhat published by the Electronic Intifada touches on the historical and cultural importance of the search in Palestinian history. “'Kings and Extras' begins to gain importance not only with the documentation of a missing piece of history, but also as a portrait of a people resolved to maintain their community, culture and political struggle,” wrote Farhat.

The efforts by Sela, Hassan and others to search, document and present the public with hidden images of Palestine and the Palestinians flies in the face of the prevailing Israeli narrative, which aims to negate the Palestinians and therefore justify the continued occupation and colonization of the land and the people. Ongoing attempts to muzzle information and keep the truth hidden from a curious public will not succeed in erasing the memories and images that show what Palestine was before the Zionists and Israelis attempted to erase its history and with it the Palestinians' presence and rights in Palestine.