Celebrated Turkish photographer Ara Guler, known as the "eye of Istanbul," has gotten a museum of his own in the city he captured over decades of change. 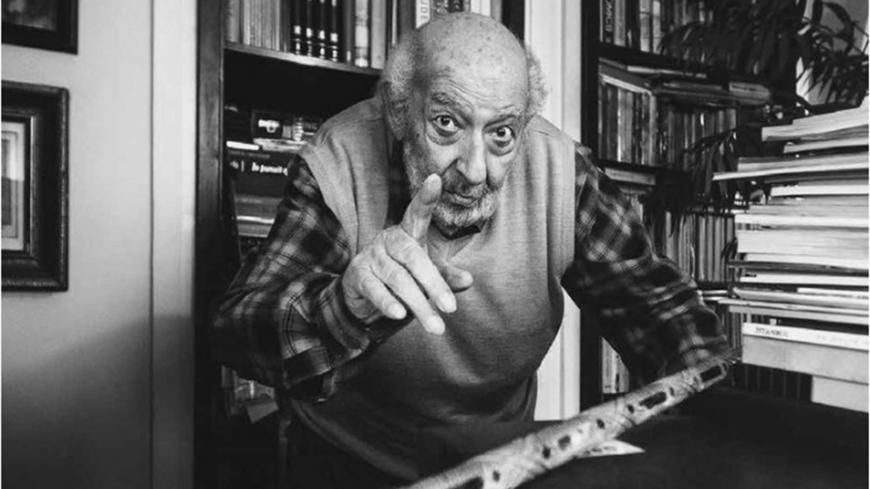 Turkey’s doyen of photography Ara Guler has amassed a vast archive spanning hundreds of thousands photos over decades of shooting in Istanbul, throughout Turkey and all over the world. His incredible body of work, known for evocatively memorializing distinct periods of an Istanbul since buried in history, has inspired the creation of its own museum.

The unveiling of the museum, in Istanbul's Bomontiada complex, coincided with the 90th birthday of Guler, who has been dubbed “the Eye of Istanbul” for his breathtaking work that zoomed in on daily life in his beloved city over the decades.

The inaugural exhibition “Islik Calan Adam” ("The Whistling Man") runs until Nov. 15 and is free to visitors. It features an array of his iconic work, including photographs from a 1952 reportage Guler conducted with Armenian fisherman in the Istanbul district of Kumkapi. One particularly striking image is of a fisherman with a cigarette in his mouth standing stoically on a boat under a foreboding sky with the old city eerily framing the background.

Himself of Armenian descent, Guler was born Migirdic Ara Derderyan in Istanbul in 1928. His family took the last name Guler with the 1934 Surnames Law. He began his career at a local newspaper in 1950, and his work ended up taking him across the globe. The exhibition features shots he took of the Eritrean civil war. It also includes portraits of famous artists such as Tennessee Williams, Salvador Dali and Pablo Picasso.

“The exhibition focuses on the world that Guler — as a photojournalist with international visibility in the second half of the 20th century, particularly with his photos of Istanbul and Turkey — formed with his contemporaries and the communication between them, as well as his own position as an eyewitness,” co-curator Sevim Sancaktar told Al-Monitor.

Some of the most powerful photos include military officers addressing a large Istanbul crowd after the 1960 military coup and images of the rampant destruction left in the wake of the infamous 1955 riots in which angry mobs violently attacked property owned by Greeks and other non-Muslim minorities. There are photographs of the ancient Greek city of Aphrodisias, which Guler himself discovered in 1958 while returning from a trip to shoot the inauguration of a dam in the province of Aydin.

Guler's driver got lost and they ended up in a village after dark. Guler entered a cafe and saw people playing dominoes on a makeshift table that was part of an ancient column. He was astounded to find significant remains of the forgotten city, which dated back to 500 BCE. A series of excavations followed Guler's incredible revelation.

The establishment of the museum comes alongside efforts to catalog Guler's massive archive, which has been transferred from his studio at Guler Apartment in the Galatasaray quarter of Istanbul to Bomontiada.

“Before we moved [the archive], our conservation team recorded the placement of every object and work. For example, we know exactly where in the Guler Apartment archive that a box of negatives here was once located, we know on which floor, room and wall a framed photograph once hung and we know exactly where and how a pen once was situated on a desk,” co-curator and Ara Guler Archive and Research Center director Umut Sulun told Al-Monitor. He added that over the next couple of years, the team aims to transform the Guler Apartment itself into a museum, restoring everything to where it once was.

The prickly yet humorous Guler was the target of criticism in 2015 after he met with President Recep Tayyip Erdogan to take his photos.

“They're mad because I went to take Erdogan's picture. Of course I'm going to take it. I photograph mosques, cathedrals and leaders. I went to four wars. You can't intimidate me,” Guler said in a hilarious interview with Haberturk. Guler defended his choice, saying he photographed all the previous Turkish heads of state. When asked if he wanted to shoot the photos of other world leaders including Vladimir Putin, Barack Obama and Angela Merkel, he retorted, “No. They should photograph me. I'm more famous than they are anyway!”

Istanbul has undergone a drastic series of transformations since Guler's golden years, multiplying in population many times over and expanding on all sides, losing precious history and landmarks as fast as it develops. One haunting image in the exhibition is a color photo of a man glumly sitting on a couch flanked by piles of wooden planks on one side and concrete blocks on the other. The photo is from the late 1980s, when hundreds of buildings in Istanbul’s central Tarlabasi quarter were razed to make room for a wide multi-lane boulevard.

Today, the area in the immediate background of the photo has undergone similarly widespread demolitions to make way for a gentrification project that has been ongoing for nearly eight years amid legal issues and other problems, a symbol of disastrous construction projects. The demolitions in the 1980s compounded the dismal conditions in the area, making it a prime location for aggressive redevelopment in the early 2010s. Guler’s photograph showcases his keen ability to connect the dots between periods of rupture in Istanbul’s tumultuous modern history.

Correction: Sept. 11, 2018. An earlier version of the article said that Ara Guler’s birthname was Aram Guleryan.