In the wake of the January 25 Revolution, young Egyptians have turned to art to express their views while freedoms are being severely restricted. 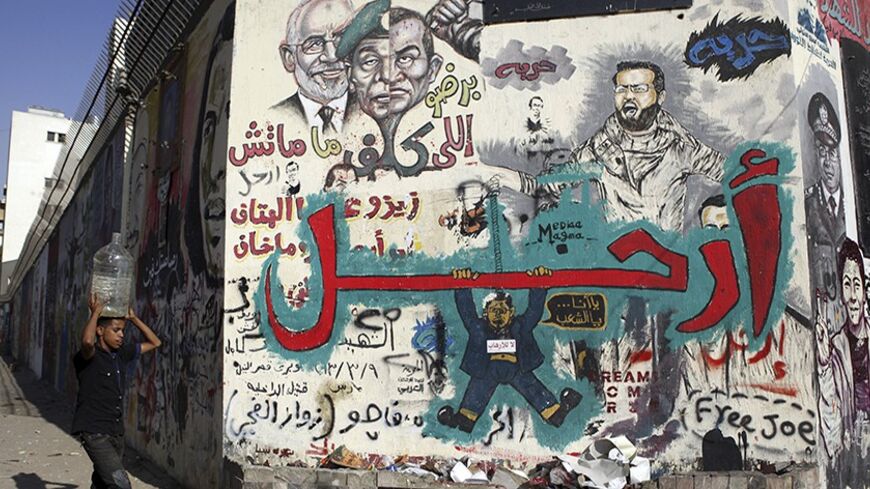 A man carrying a water container on his head walks in front of a wall filled with graffiti depicting deposed Egyptian President Mohammed Morsi with a message reading "Leave," at Tahrir Square in Cairo, July 14, 2013. - REUTERS/Amr Abdallah Dalsh

During the January 25 Revolution, several talents in the various fields of art emerged. These art forms served as a means to stimulate demonstrators throughout the 18 days of protests in Tahrir Square, transforming the harsh cold weather of January and February into warmth, as the enthusiasm for songs, drawings and caricatures was ignited. Those who created this art called it “alternative art.”

Ramy Essam, or as he is known in Tahrir Square, “the singer of the revolution,” is one of the many talented artists who shined during the protests. He used to chant revolutionary lyrics that encouraged protesters and reinforced their determination to oust former President Hosni Mubarak.

Essam embarked on his journey a few years prior to the revolution, when he formed a band named Mashakel (Problems). Yet he became famous with the outbreak of the revolution, during which he discovered his ability to write revolutionary lyrics and compose music. He stepped on stage, held a guitar and started singing. His first song was “Irhal” (Leave), and the lyrics quoted the slogans chanted by the protesters in the square.

Yet “alternative art” has not been limited to songs. Graffiti art emerged following the January 25 Revolution, and various drawings were seen on walls throughout the city. These drawings represent the successive developments of the revolution, starting with the sit-in in Tahrir Square, the events that took place on Mohamed Mahmoud Street and in Maspero and the many other events that Egypt has witnessed since the revolution.

Hajar Salah is a well-known Egyptian graffiti artist. She told Al-Monitor that graffiti is an inductive art designed to document the revolution’s events, and to keep the memory alive of the martyrs who fell during the revolution. Although graffiti existed in Egypt before Jan. 25, 2011, the revolution has largely contributed to its expansion and allowed Salah, along with her colleagues, to express their desire for change through drawings on the walls.

Tahrir Square witnessed the emergence of many other art forms that were exposed to the public. The people wanted change to be brought about not only in the ruling regime, but in concepts of creativity as well. Egyptian comedian Bassem Youssef sarcastically criticized the authorities who violently suppressed protesters and accused them of treason. He first appeared in short videos on YouTube, and after he was well received by the public, he introduced his new comedy show “Al-Bernameg” on a number of satellite TV channels.

Nevertheless, the situation started to change following the June 30 events that resulted in the ousting of former President Mohammed Morsi. Speaking to Al-Monitor, Essam said that censorship of this “alternative art” increased after June 30. He mentioned that the Egyptian security services stopped his concert during the Cairo International Book Fair on Jan. 28, 2014, given their objections to his songs criticizing the suppression of freedoms and the violence of the police against opposition factions, as well as the singer’s attacks against the military council. Security services turned off the microphone while he was singing a song titled “Horriya” (Freedom) and demanded that he leave.

Essam added that the state, once again, began offering financial support to commercial art “that lacks a purpose,” by hiring producers and ensuring media coverage at the expense of the alternative art. The latter, according to Essam, tells the truth and isn’t aimed at merely distracting people.

Salah confirmed that the freedoms she and her fellow painters enjoy have significantly shrunk. The ban on graffiti is not only enforced by security services, but by ordinary citizens who attack those who draw on the walls. These citizens also volunteer to erase images of the martyrs and revolutionary slogans with white paint and black spray paint, according to Salah.

Yet, she explained that the painters did not sit idly by while watching their testimony for history being erased from the walls. They found other ways to spread their ideas, namely through drawing on clothes — for example, T-shirts — where they wrote statements in favor of the revolution and drew pictures of the victims who died during the previous events. Thus, the people were flaunting revolutionary ideas with their clothing.

Season two of Bassem Youssef’s show was halted after the airing an episode following Morsi’s ouster in which he criticized Defense Minister Gen. Abdel Fattah al-Sisi. The channel broadcasting "Al-Bernameg" broke his contract.

These restrictions on freedoms did not seem to prevent the rise of other artists able to convey their ideas to the public, most notably the Alshakhanah program. It consists of a number of episodes on YouTube presented by Ali al-Tabib al-Chabb. In light of the confusion of information on the Egyptian street, Chabb found it better to present the real historical facts and project them to the Egyptian public. Since he is out of the country and the security forces can’t prosecute him, he is able to expose his ideas more freely. For instance, in one episode, he talks about the similarities between the 1973 Chilean military coup and the events taking place in Egypt.