Iraq's professional and aspiring artists have taken to the streets with their own weapons: paint, brushes and musical instruments. 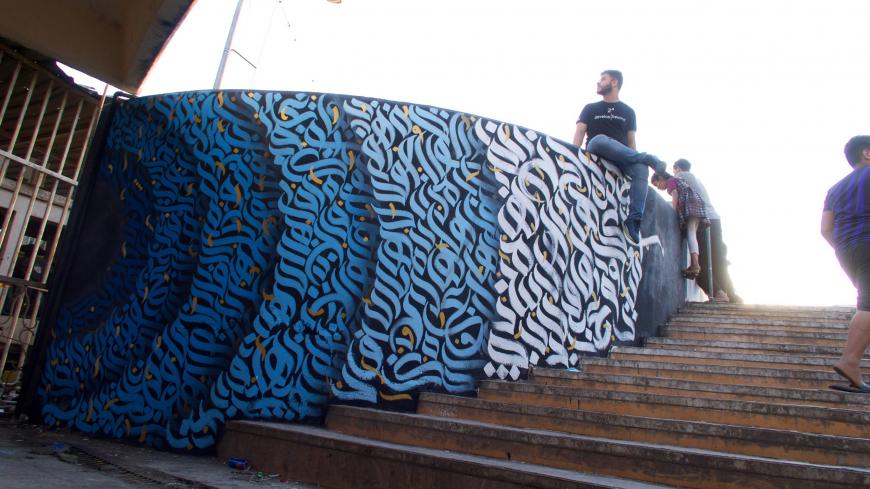 Raid Madhaa's painting in support of the protesters calling for better governance is seen in Baghdad, Iraq, in this undated photo. - Raid Madhaa

Calligraphy characters in sky blue, dark blue and white with speckles of gold dominate the al-Saadoun tunnel that leads to Baghdad’s Tahrir Square, the hub of the public protests that have been sweeping Iraq for the last two months. Though the color scheme recalls the blue-glazed tiles of the famed Ishtar’s Gate, the recently-painted mural is no tribute to the past but a call for a better future. Raid Madhaa, a biotechnology student, has made the mural in support of the protesters that have been on the streets of Iraq to call for better governance.

The outbreak of the protests in the Iraqi capital and other cities has inspired dozens of young artists, who took to the streets with their own weapons — spray paints and paintbrushes. Their angry strokes have turned a long-neglected, dreary tunnel into a revolutionary art gallery.

Most of the murals refer to Iraq’s unity, condemn sectarianism, call to end foreign interventions and hail the heroic acts of tuk-tuk drivers. The scribbles lament the silence of the world vis-à-vis the victims of police brutality.

The death toll of the mass protests has passed 408, according to police and medical sources. Despite tragic scenes of young men dying on the streets, skulls shattered by tear gas grenades, and the use of live ammunition against unarmed protesters in Baghdad, Najaf and Nasiriyah, Iraqi youths insist on their legitimate rights without resorting to violence.

Street art — particularly graffiti — is one of the main tools, as in many other protests from Beirut to Istanbul.

"Ever since 16, I favored graffiti as a means of expressing myself,” Haider Alaa, now 21 and a student of dentistry in Baghdad, told Al-Monitor. When the protests first started, Alaa went to the streets to provide medical help to the demonstrators. Then he decided to take up his brush.

"I just dabbled in the beginning, with a few strokes of the brush,” he said. His first graffiti was inspired by “I heard Baghdad Abjuring Me,” an Iraqi song that laments the sad state of Iraq after 2003. "I was planning to write ‘I heard Baghdad’ to say that Baghdad is no longer well, that it has become a city of unrest. This song really touches me and expresses Iraq's current situation," he said.

Both Alaa and Madha use blue in their graffiti — a color of peace and freedom.

"I chose the color of the bright, cheerful sky — a color loved by all,” Madhaa told Al-Monitor. "My first mural in the square was calligraphy that represented Iraq's map. I liked how people reacted to that piece, so I went on to a second one.”

"The tunnel has become a place where people live, sleep and take photos,” he said. “We added beauty to that place. We all like to sit in a pretty dwelling."

Next to their work is that of 24-year old Baghdadi graffiti artist Osama Art, who employs cuneiform symbols, the world’s oldest writing system invented by the Sumerians, to write the Arabic words of peace and love.

“It took me seven hours nonstop to write ‘peace in the world' in cuneiform, 44 x 22 meters, on the roof of Al-Sinak Garage,” said Osama, noting that it might be the largest peace image in the world.

“In honor of the October Revolution’s martyrs and in solidarity with the demonstrators, 1,500 candles were lit around this word” on Nov. 25, he said. “From the heart of darkness, oppression and murder, peace will arise. Our real victory is to defeat the enemy without a fight.”

Young calligrapher Sajjad Mustafa came all the way from Basra to take part in this spontaneous art festival. In his first visit to the capital, Mustafa tried to produce the face of Safaa al-Saray, a martyr whose death by a thrown tear gas canister made him a symbol of the revolution. He used Sunbuli calligraphy, a form of Arabic calligraphy developed in Istanbul in 1914.

“I drew Safaa’s profile on my IPad and wanted to reproduce it in Tahrir Square,” said Mustafa, “Unfortunately, I could not achieve what I wanted and was forced to go back to Basra.”

On his second visit, Mustafa met a group of young artists.

“I wanted to share my designs in the tunnel and dedicate my work to the martyrs who sacrificed their lives for us,” said Mustafa. “I removed my old painting and two friends gave me space from their own artworks. A friend from Basra helped me draw a large circle. We wrote the names of 50 martyrs. In the center, we wrote 'from Basra to Baghdad.'”

There has been unprecedented participation by women in Iraq’s largest protests since the fall of Saddam Hussein’s regime in 2003. Many murals hail women’s power and contributions, call for equality and echo famous global feminist movements.

"Every artist expressed himself in his work,” said Madhaa, “There is a painting representing women's contributions; another glorifying the role of tuk-tuk drivers risking their lives to help the wounded and others just channelling their inner beauty, turning it into a source of happiness for all."

While Mosul residents are prohibited from taking part in mass protests in their war-torn city, a group of singers produced an Iraqi version of the famous 19th century Italian protest folk song “Bella Ciao” using the Iraqi lyrics “Belayya Chara,” a play on words that means “There is no remedy.” The song laments a miserable situation of poverty, unemployment and hopelessness among students as well as their call for a united Iraq and peaceful existence.

Seta Hagopian, a 69-year-old singer known as Iraq’s Fairuz, sung for her hometown’s revolution. Iraqi pianist Rana Jassem played the Iraqi national anthem on her piano in Tahrir Square, expressing alongside many female doctors and medical students a powerful return of Iraqi women to play their role in shaping the country's future.

On Nov. 21, the Institut français d'Irak held an art exhibition titled “Liberation of Talents,” to showcase a collection of paintings, designs, copies of Tahrir murals and photographs depicting the mass protests.

“Art is an attitude, word, humanistic duty and freedom,” said Nibras Hashim, an artist and professor at the Institute of Fine Arts in Baghdad. Hashim, who helped launch the initiative, said that some of these works were produced by amateurs, others by professional artists and art students. “The motivation was love and freedom,” she added. “This made their works honest and beautiful.”

Iraqi artists abroad are also getting involved in their country’s protests.

Houston-based dentist and artist Hussein Al-Khudhari spoke to the contrasts of the revolution.

“I am full of both pride and grief,” Khudhari told Al-Monitor. “I gave my work the title "The Roses and Blood Revolution" to express a powerful contrast in this movement. I usually leave my works untitled so as not to limit the viewer's imagination.”

Khudhari’s painting was sold in an auction held in collaboration with the American Red Cross, with the revenue going to the protests.

“It represents the martyrs' mothers as wearing masks, a head shattered with a tear gas canister and a transformation process in which each killed person becomes a rose. With each drop of blood, a rose blooms.”

For Khudhari, the new roses represent the dissolution of sectarianism and class differences and the rise of national unity — represented by a mosque and cross on the painting’s left side.

Khudhari’s figures are shapeless. “Their voices are more important now,” he said, “Our voice is one regardless of race, sex or religion.”

Khudhari wishes he could paint in Tahrir Square.

For him, art proves that Iraqi minds, not wealth, can create real change and show the real, civilized face of Iraq.

“This is our peaceful message, this is our people,” said Alaa, the dentistry student. “This is who we really are. Art represents us, not destruction, bombs, killing or terrorism."