Meet the Lebanese artist who has created the heart of revolution

A sculpture by artist Hayat Nazer delivers a message of compassion, peace and reconciliation amid the going protests in Beirut. 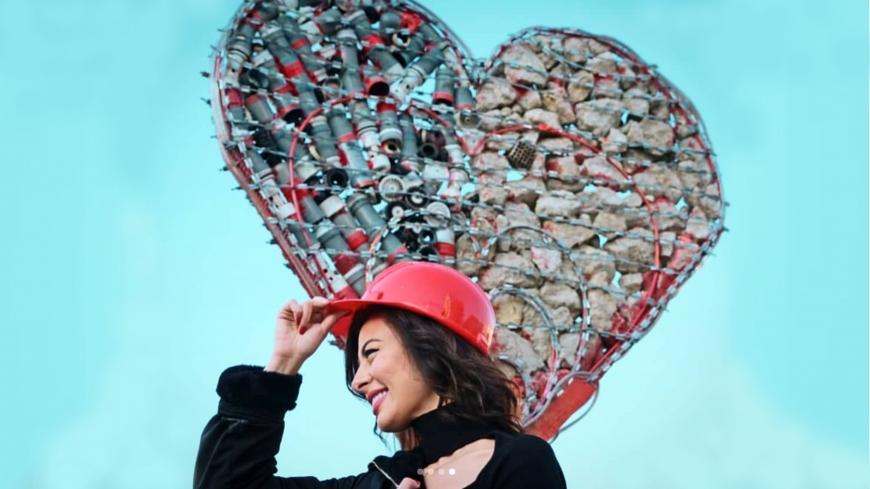 Artist Hayat Nazer stands in front of her heart-shaped installation, made from tear gas canisters, rocks and barbed wire, in Martyrs’ Square, Beirut, in a photo uploaded Feb. 29, 2020. - Instagram/hayat_nazer_v/jadgghorayeb

BEIRUT — A statue of a huge heart has stood on Beirut’s Martyrs’ Square since Valentine’s Day. When darkness sets in, its neon lights illuminate the whole area, casting a heart-shaped shadow on the so-called Wall of Shame, a concrete-and-metal structure built to keep protesters away from the doorsteps of the legislature. The Lebanese artist Hayat Nazer created the installation, filling a heart of barbed wire with tear gas canisters and stones.

Born and raised in Tripoli, Nazer is a self-taught visual artist and a graduate of the American University in Beirut. Her work with NGOs and humanitarian-focused international organizations has been a source of inspiration for some of her artistic projects. For the heart, Nazer collected the remains of tear gas canisters that security forces had lobbed at protesters, rocks the protesters had thrown at the security forces, and barbed wire and sections of concrete similar to the barriers positioned at the entrance to the parliament building. She erected the sculpture on Feb. 14 on the square that became the heart of the protests ongoing since October 17.

After the protests began against government corruption, mismanagement, and waste and harsh economic conditions, the country’s creative community turned its attention away from museums, galleries and other traditional cultural venues to the street. Martyrs’ Square has practically become an open air art gallery, with budding young artists and protesters working side by side to capture the spirit of the revolution. Colorful graffiti and murals around the square proclaim the slogans of the revolution. “Words are our weapons,” one states.

“This is the art of change,” Malak Hashem, a frequent protester, told Al-Monitor. “The square has become prettier and now reflects the rebels and their sense of aesthetics. The art of the October Revolution will live on, even after [the changes we seek] are realized.”

In addition to symbolizing the spirit of the rebellion, the heart also carries messages of peace, compassion and reconciliation. “I thought of the heart when tear gas canisters were being lobbed at us during protests,” Nazer told Al-Monitor. “We wanted to make sure that our battle is not against the security officers, but those who are corrupt and in power. The heart tells our story as rebels and the experience we have lived through in this very square. The heart is torn between those shooting canisters and those throwing stones, but both are in one heart. With this heart, we have turned hatred and pain into love.”

Nazer said that it took her two months to collect the canisters and another three weeks to produce the sculpture, with people in the square working with her. The heart sits on four blocks of concrete symbolizing the barriers at the entrance to the parliament.

On block contains the names of Lebanese who have challenged the system, including Gebran Tueni, a journalist and member of parliament assassinated in December 2005, and another features the names of those killed during the Oct. 17 revolution, among them Alaa Abou Fakher and Hussien al-Attar. Nazer said the two remaining blocks will tell the story of the revolution and highlight the tools the protesters have used to defend themselves, such as masks and onions.

Among other works erected on the square over the last four months of protests was “Revolution Fist,” a giant fist cutout with “Thawra” (Revolution) written on it. A man set it on fire a few days after it appeared. Another artwork, an iron phoenix, the mythological bird that rises from the ashes, was erected in December and remains on the square. Also spearheaded by Nazer, it is made from the metal remains of protesters' tents destroyed by people who oppose the movement, some of them affiliated with parties in the government.

Nazer collected the metal with the help of young men in the square. As the final touches were made to the phoenix, protesters sang “Elloun Inak Libnani” (Tell them you are Lebanese), by the singer Assi al-Hellani, signifying that the revolution would not be extinguished, but rise again and again.

“When the revolution broke out, I painted graffiti of a phoenix emerging from the fire in Riad El-Solh Square,” Nazer said. “This was inspired by the fire that destroyed huge amounts of forest earlier in 2019. The phoenix delivered the message that we are not going to be broken, and we will rebuild what is destroyed.”

The protesters have also used art to mark special occasions. In late December, demonstrators put up several Christmas trees, decorated with slogans of the revolution and symbols of Lebanon, such as the flag and a cedar. The makeshift trees were a signal to the government that it was possible to celebrate Christmas and New Year's without great expense or further burdening taxpayers. People on the square celebrated, singing Fairuz’s “Bhebak Ya Libnan” (I Love you, Lebanon).

Hundreds of artists showcased their artworks on Feb. 2 for Innovative Day in downtown Beirut. Among them, Pierre Abboud made the “Olive Tree,” consisting of two large trunks and branches made of plastic and tin. The use of recyclable materials was in reference to the government's poor waste management.

While many of the protesters like to pose next to the works and post the images online, others see the pieces as “secondary,” viewing artistic expression as a luxury in a country facing overwhelming economic, political and financial difficulties. Some of the protesters told Al-Monitor that the artworks are only of relevance to elite groups, foreigners and art aficionados, who visit the protesters’ tents and frequent the squares to talk to the demonstrators.

Iman Ayyad, who supports the protest movement, likes the public displays. “It is a beautiful idea through which artists can express the revolution in their own way,” he told Al-Monitor. Hussein Abbas, a regular on the square, was less enthusiastic. “Our concern today is the economic and living situation,” he remarked. “Art is great, but perhaps it is not a priority now.”