Since the start of Lebanon’s protests on Oct. 17, street artists have mobilized to add their marks to the massive movement that has swept across Lebanon. 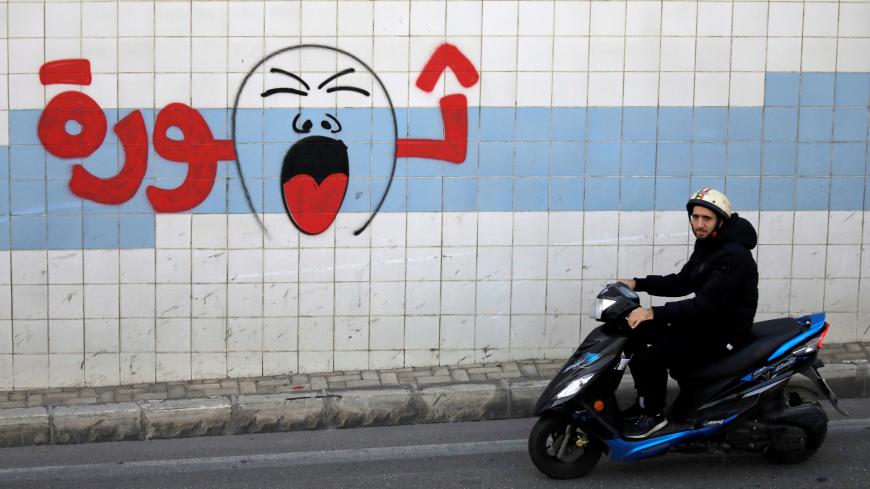 BEIRUT — The smell of paint filled the air as artists expertly moved their brushes back and forth along the walls surrounding the statue in Martyrs’ Square. Each artist adds a new mural or image to express him or herself as music plays softly around them.

Since the start of Lebanon’s over two-week-long protests on Oct. 17, street artists have mobilized throughout the country to add their marks to the massive movement that has swept across Lebanon. However, while street artists have thrived during this time, traditional art institutions such as galleries and exhibitions have gone on strike in solidarity with the protesters and because these events would struggle to draw a crowd.

“If you have worked on a program for the past year and you are launching it, you don't want it to end,” artist and curator Noor Haydar told Al-Monitor, adding, “You don’t want to cancel it because you have people coming in from abroad participating. I think it’s a bit of both. I think that they were waiting to see how big this was getting, but they wanted to be on the street too. A lot of their employees and staff members were protesting. No one would have the indecency and insensitivity to open up a [gallery]. And who is going to go anyway? Who’s going to go to an art gallery and be like, ‘Oh, this is lovely’? I mean, it’s a bit divorced from reality.”

One such program that was put on hold is Home Works, a biannual arts forum that brings together the country's cultural sector. While the program was able to have its first day, it coincided with the start of the protests and has since been postponed indefinitely.

Despite programs such as this being put on hold, Haydar argued that the protests may have had a negative impact on the institutions now, but artists have been able to slowly accumulate new bodies of work that can be displayed later on.

“It’s strange how in times like these, big businesses lose money, but young, individual artists and curators probably are building momentum and gathering lots of content and feeling super inspired," she said, adding, "I know that some artists are selling their artwork during this time.”

For British artist Tom Young, who has lived in Lebanon for a decade, art is not just something to do for fun during protests like the ones that have engulfed Lebanon; it is also a responsibility.

“I think that it’s an artist’s responsibility to really express what’s going on and the truth of what’s happening at the moment," said Young.

Haydar agrees with this sentiment.

“Art is a response to your environment. It’s a way to express yourself without being violent … and in a language that everyone can comprehend in their own way. It’s about documenting a moment in history," she said. "Just like the Renaissance. If we didn’t have paintings that told a story, then what will you have besides storytelling and writing?” Haydar added.

Agnes, a young artist who asked Al-Monitor not to use her last name, views the street art that she does as a way to express how she feels — along with many other Lebanese — about the current situation. One piece she was painting in Martyrs’ Square depicts two eyes full of emotion.

“I call it ‘Eyes of Beirut,’” she told Al-Monitor. “It’s a woman where we’re just seeing the eyes. She’s wearing a hijab, and she’s crying because of the state of the political situation in Lebanon. That’s the feeling that I have about the situation,” Agnes said.

For Agnes, working on her art and making it visible to the world is a way of silently and nonviolently expressing her anger and emotions at the current situation in Lebanon.

“It’s just showing the world that we can express ourselves in different ways. We can paint instead of shout, or write stupid songs about politicians, or go fight or stab people and make problems.”

Both Haydar and Young have been working on pieces throughout the protests — and both are trying to tell stories through their work.

“I’ve been doing some artwork myself,” Haydar explained, adding, “and even though I don’t want to capitalize on this moment, I want to go down and be on the street. … How can you not want to [respond] to this? So what I’m doing is collecting bits and [pieces], like remnants of the protests and the people who were there, and trying to find out who the humans are behind this protest, because when it’s a massive protest with so many people, you just see it as one big cloud. One big wave of energy. But when everybody leaves, you see the little memories and the identities everywhere [that were] left on the street.”

One of Young’s pieces depicts the tents in Martyrs’ Square with the statue, mosque, church and “Egg” (a local theater that has become a venue for artists during the protest movements) in the background. Young said this painting holds a lot of significance to him.

“I actually went to the tent encampment to draw sketches, take photographs and meet protesters in the tents to prepare to do this painting. Then, on my way back from Martyrs’ Square, I realized there was a major confrontation going on. So I witnessed that, and I was quite close to the fighting — that was quite scary," Young said.

“Then I saw the Hezbollah gangs basically being sort of funneled by the police back toward Riad el-Solh, and then they seemed to be going toward Martyrs’ Square. I thought, ‘Oh my God, what is going to happen?’ I got a bit scared and I came back home and continued with the painting. Then I switched on the TV and saw that they were destroying and burning everything. So I was literally doing a painting of what had been only an hour before. I felt incredibly sad and incredibly angry that these thugs were destroying what seems and feels like such a beautiful and positive moment. I was filled with extra motivation to try to sort of rebuild it in the painting as my sort of share of solidarity with the protesters,” Young added.

Besides paintings and graffiti, music has also found its niche during the protests. Remixes of chants are being blasted on dozens of speakers in Beirut’s streets, and DJs are performing shows at night that get thousands of people jumping and dancing to the constantly changing beats. According to Haydar, these protests have brought a much-needed spark to reignite the music scene in Lebanon, which had been previously struggling.

“The music scene in Beirut was really suffering,” Haydar said. “But now there is a new wave of music being made and recorded. For example, I can compare it to what happened in Cairo. In Cairo, there was a movement of music that is sort of revolutionary. It was a mixture of techno, electro and shaabi (popular music with Egyptian roots) music, and I saw that there is a similarity to this music in Tripoli. I’ve never seen that before. It’s like the biggest concert ever to exist in Lebanon — and some bands played at the Egg. People are releasing songs on Facebook, so there’s a lot of content and things to be said. I would say the rap scene, the hip-hop scene, will flourish with that.”

Artists continue to add to the growing number of songs and murals that have become a new staple for the protests, and as long as the demonstrations continue, they are likely to continue to grow larger and larger.