In an exhibition at the Saleh Barakat Gallery in Beirut, Lebanese artist Katya Traboulsi celebrates cultural diversity while highlighting the way that fear of difference drives a never-ending cycle of conflict. 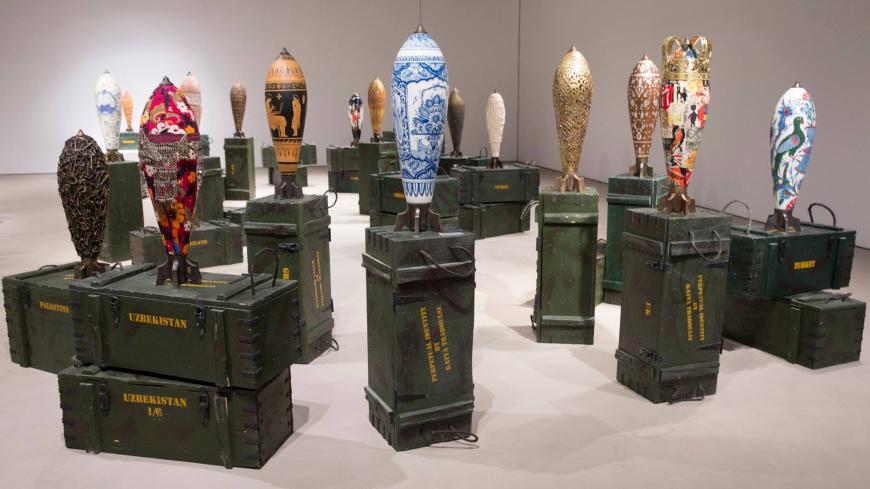 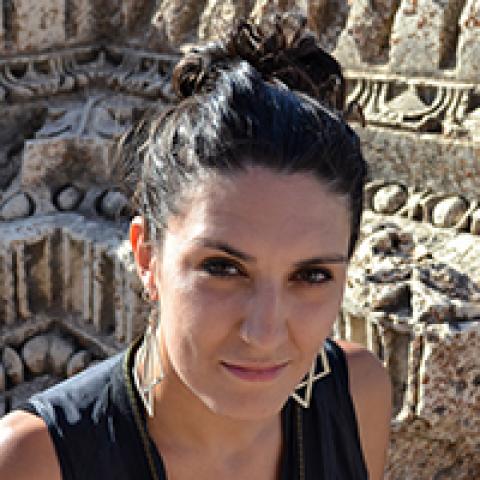 “When you have kids, you live in constant fear of the future,” says Katya Traboulsi, seated in the spacious underground exhibition hall of the Saleh Barakat Gallery in Beirut. Behind her are 47 sculptures. Each is made from different materials and decorated in a unique style, but all of them share the same basic shape: They are modeled on the bombshells that razed swaths of Beirut’s urban fabric to the ground during the horrific civil war that formed the backdrop to Traboulsi’s teenage years.

“Since the First World War, the Second World War and what’s happening now [in Syria], we’re not learning,” Traboulsi laments. “We need to be at war. We need to destroy the other. Why? We’re all the same. We all have blood and bodies and fear and emotions. It’s just physical appearance and geography that create different identities.”

Geography, borders and nationalism are at the heart of Traboulsi's exhibition. Titled “Perpetual Identities,” it explores the relationship between conflict, culture and identity. Each of the 47 sculptures on show is designed to represent the culture of a different country, highlighting the value of cultural identity while also serving as a warning about the dangers of nationalism and fear of “the other.”

The artist was spurred to begin work on the project, which has taken almost four years from conception to exhibition, by the ongoing conflict in Syria, which caused her to question whether human beings are capable of living in peace.

“We have beautiful identities that I’m celebrating to show that we can enrich each other instead of destroying each other. The object of destruction that I grew up with becomes an object of life, of history, of art,” she says.

Traboulsi selected 46 countries to represent, spanning five continents. Lebanon, exceptionally, is represented twice. One sculpture is made of carved cedar wood and features a motif of men in rowing boats, inspired by the seafaring Phoenicians who established settlements in Byblos, Tyre and Sidon more than 3,000 years ago. The second is covered with a colorful collage made up of the logos of the 18 Lebanese political parties in the wake of the civil war.

“Lebanon was a very difficult piece to execute because I didn’t know what our identity really is today,” Traboulsi says. “I was asking Lebanese people around me, ‘What is our identity?’ and they were all looking at me with empty eyes: ‘Err … tabbouleh? Hummus?’ [We have] no identity really, because of the war. … We are defined by the war, outside and inside. It’s been 30 years since the war and we still talk about it.”

She has also defined several other countries by a history of conflict. Her Palestine sculpture is covered with metal keys, representing the house keys often passed down from one generation to the next among refugee families who fled Palestine in 1948 and were never able to return home. For Germany, meanwhile, Traboulsi chose to ring the central bomb shape with sections of concrete, covered with graffiti and topped with barbed wire, to represent the Berlin Wall. Unlike the Palestinian piece, which tells the story of a conflict without resolution, the German piece evokes the moment the wall came down, an enduring symbol of triumph and reunion.

Other pieces are more light-hearted. Traboulsi’s evocation of America is a collage made of fragments of pop art, dollar bills, and iconic comic book and Disney characters from Batman to Mickey Mouse. “America is a new country. How do I know America? I know it for the pop art, for the music, for the lightness of this fun, plastic side. The American dream,” she says.

One of the most interesting aspects of the exhibition, however, is how many of the sculptures are rooted in cultures that preceded the existence of the modern nation-state they have come to represent.

For Mexico and Peru, Traboulsi chose to focus on ancient civilizations, representing Mexico through a wooden sculpture inspired by Mayan artwork dating back to the 10th century B.C. and Peru through another carved wooden piece based on huaco, pottery crafted by the ancient Huari, Nazca and Moche people in the first millennium. The extent to which any modern nation can claim ownership of ancient cultures is one of the interesting questions raised by the show.

Clashes of culture are also evoked in her choice to represent Canada through a painted wooden totem inspired by indigenous Canadian culture and Australia through Aboriginal dot painting. By choosing to highlight identities under threat, she draws attention to the damage done by colonialism and the tendency of nation-states to prioritize internal homogeny, threatening minority cultural practices.

The traditional cultural practices used to represent the Arab states — intricate metalwork for Morocco, wood inlaid with glimmering mother-of-pearl for Syria, painted ceramics for Tunisia — each belongs to a region that does not correspond to modern borders, the result of the carving up of colonial empires. For Nigeria, she has created an intricate beadwork sculpture of a bird — the Yoruba emblem of the king’s role as intermediary between his subjects and the gods — honoring a culture that spans three modern nations.

Traboulsi doesn’t appear to have made these choices as a conscious commentary on colonial legacies or the ideology and politics of the modern nation-state, explaining that her aim is not to dwell on the past but to highlight the risk of further conflict in the future. But she is very aware that the concept of cultural identity is a double-edged sword. “It can be a wonderful thing,” she says. “But without borders, I believe that it would have been a source of enrichment more than separation.”

“Perpetual Identities” is a complex exhibition that raises many questions about culture and ownership, belonging, nationhood and conflict. In celebrating the cultural heritage that is so often a casualty of war, Traboulsi underscores the value of individuality while at the same time raising questions about the dangers of national identity, which leverages culture to engineer a sense of belonging that excludes outsiders, fostering enmity and division.

Traboulsi’s sculptures tell a story of creativity and destruction going back centuries, conjuring the ghosts of civilizations that rose only to fall, leaving nothing behind but artifacts and ruins. At the same time, they celebrate the sheer beauty to be found in diversity, highlighting the importance of fostering cultural exchange rather than conflict.