In a country where art galleries are few and far between, artists have transformed walls in public places into canvases. Critics of the form recently defaced graffiti displays across the country, but Yemeni artists are pushing new mural and sculpture projects to advance the idea of public art, writes Nafeesa Syeed. 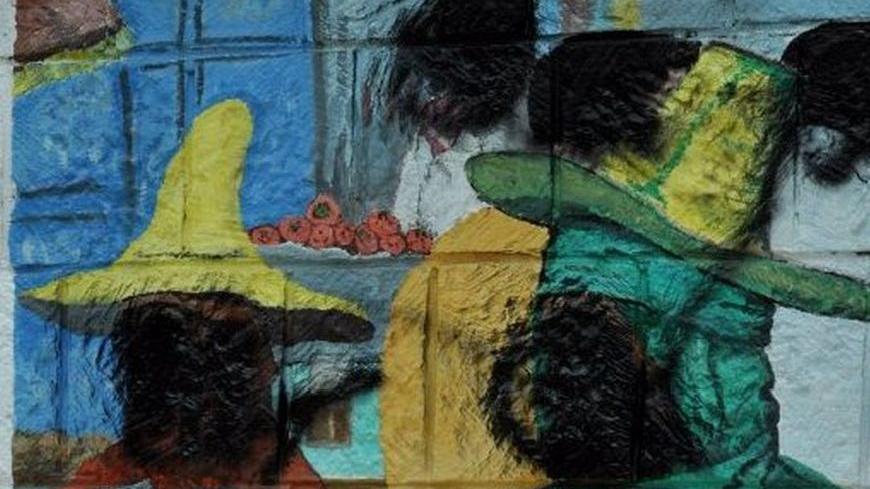 TAIZ, Yemen — Standing before her impressive depiction of a Yemeni woman shepherd, Maha Al-Shaibani squints her eyes as she giggles nervously under her face-veil.

The shy 24-year-old had only sketched pictures by pencil until trying her hand at painting in a mural wrapping around a noisy intersection in Taiz, a city in southern Yemen. "This is the first time that I used real paints. I started to mix them together," Al-Shaibani said. "Playing with colors shows your personality."

Al-Shaibani along with a group of young artists and art aficionados, who call themselves Colors of Life, reflect the latest development in Yemen's urban arts scene that stemmed from the spontaneous graffiti popularized during this past year's revolution. As in other “Arab Spring” countries, like Egypt, the walls have provided outlets for creativity and elevated street art into an accepted artistic form in places where there are few gallery spaces and schools with arts curricula. In Taiz, they're aiming to advance the concept of public art that's open to all through their new mural and sculpture projects. However, there are obstacles — just last month someone painted over the faces in their first mural, as some believe such depictions to be un-Islamic.

Across Taiz, including in Freedom Square, the ubiquitous Arab Spring slogan, "Irhal" (Leave), is scrawled across walls. Many youth credit this period with unlocking the floodgates of expression, with graffiti first taking off in Sanaa, the capital.

"Before the revolution, the youth were afraid to go out in the streets and paint because they might be stopped," said Sadek Maktary, 24, a clean-shaven accountant and Colors of Life founder. "After the revolution, there was a big movement and many people went out and broke the wall of fear."

But following the uprisings, Maktary said there was a lull in life here. His peers added that a kind of sadness and pain had overtaken Taiz, where they said many young people were killed in revolutionary violence. They drew inspiration from a so-called "march of life" in which demonstrators trekked from Taiz to Sanaa to revitalize the revolutionary spirit. "We took this same idea to revive life again in Taiz," he said, calling their collective Colors of Life or Alwan Al-Hayah in Arabic.

So they set out to beautify the city but also resuscitate the reputation of an acclaimed, but forgotten contemporary Yemeni artist, Hashim Ali. They recruited volunteers and businesses that donated paint and tools as they transformed several blocks around prosaic government offices and apartment buildings into a work of art. Artists painted renditions of Ali's work — as well as his bespectacled face — while schoolchildren and other community members pitched in to fill in the honey-comb patterned background. They completed the mural in July.

"It was our duty, as youth of the revolution, to show the world who this man is," Ridwan Al-Hashidi, 41, said of Ali, who lived in Taiz before his death in 2009. “The people had no idea who he was. Even when they pass by and see his picture they think he is one of us." The baritone-voiced Al-Hashidi said he and the other founders emerged from the square with the idea for an initiative to “spread colors” in Taiz, known as Yemen's culture capital.

On the walls, there's a dark-faced woman in a flowing orange dress and blue head wrap walking ahead of her donkey. A black-and-white fisherman with exaggeratedly large hands and feet hauls an enormous fish against his shoulder. In an image entitled, "Me and the Sun," a man outstretches his arm and holds the sun in his palm, protecting his ox as they plow a field. Another painting shows a woman wearing two long braids and earrings, while balancing a block upon her head.

The group avoids expressly political themes as members say with varying viewpoints they don't want to alienate anyone. Recently though, another group of artists started a portraiture campaign of political activists along the streets of Sanaa. The faces of mostly young mustached-men appear beside the words “enforced disappearance.” Dates of when they went missing are also listed, with some reaching back to the 1970s.

Even so, through Ali's work, the Taiz artists have still highlighted social and economic issues.

"Most of what he says is about the village and how people suffer in the countryside," said Al-Shaibani, the first-time painter. Ali's many female portrayals also spoke to her and other women whom she said gained the courage to paint. "Frankly, the message is great because the woman is always very important in society and she can do more than one job. And he focuses on how women participate with men in work."

Maktary said there's an exhibition venue in town that displays artwork, but it's "limited to certain people. Everyday people can't go to view these paintings." In this teeming part of town, any passerby, say, on their way to the nearby central post office, can now interact with the art. Moreover, the group has become a safe, innovative space for artists, especially as they discover untapped talent. Other groups are also picking up the mural medium. Colors of Life also has plans to work with more students, since they say arts education is not emphasized. Eventually, they're hoping to establish a center or institute to teach painting and other forms as well as bring famous Arab artists to Taiz.

Despite largely positive reactions, there has been some resistance. Initially, some critics verbally conveyed their qualms about the mural, such as being upset that the images show Yemen's "weaknesses" as opposed to picturing visions of a triumphant battle, for instance.

But in September, when Maktary was ill in bed, his brother got a call: the mural had been defaced, quite literally. He rushed over to find all the faces coated in black paint and some insulting slogans. Incredibly, other parts of the mural remain untouched. It appeared the culprit had struck after dawn prayers that day. Although it's not known who's responsible, it was likely someone who believes that drawing human faces is haram, or goes against Islamic tenets, a sentiment some had expressed to the group earlier in passing, but they had not yet gone this far.

"It's very, very disappointing," Maktary said. Some members were saddened, others angered.

His group held vigils and created human chains, with young men and women lining up against the mural and holding signs saying they will not be conquered — turning around one of the spray-painted swipes against them. The response shocked them: people from all walks and orientations, ranging from government officials and young revolutionaries to members of socialist and Islamist parties, came out to condemn the act.

After posting pictures on social media sites of the damage, the group received an outpouring of virtual support (the 'likes' on their Facebook page went from the hundreds to more than 3,000).

While it might be enough to discourage them, the group's spin on the ordeal is that it's been a boon, as they're encouraged by the solidarity and now many more people know about their work. As the public possess the art as their own, members say it will be the people who will protect the murals in the future.

They have since restored the mural, with artists first brushing over the black with white paint and once again working off Ali's original portraits to recreate the faces. Unbending, they plan to then move on to their next mural where they will incorporate pictures and Arabic calligraphy around the theme of education and learning. "We are determined," Maktary said. "If he damages it again, we will continue."

Another project is also on the horizon. The road where their first mural is located doesn't have a name, so the group says they're in talks with the government to coin it after the eponymous artist: Hashim Ali Street.

Nafeesa Syeed is a freelance writer and editor based in Washington, DC, on Twitter at @NafeesaSyeed.