Singer from 'The Square' in shadows of Egypt's crackdown

Ramy Essam’s tunes were popular during the protests against President Hosni Mubarak, but his present stance has drawn threats of detention from the current regime. 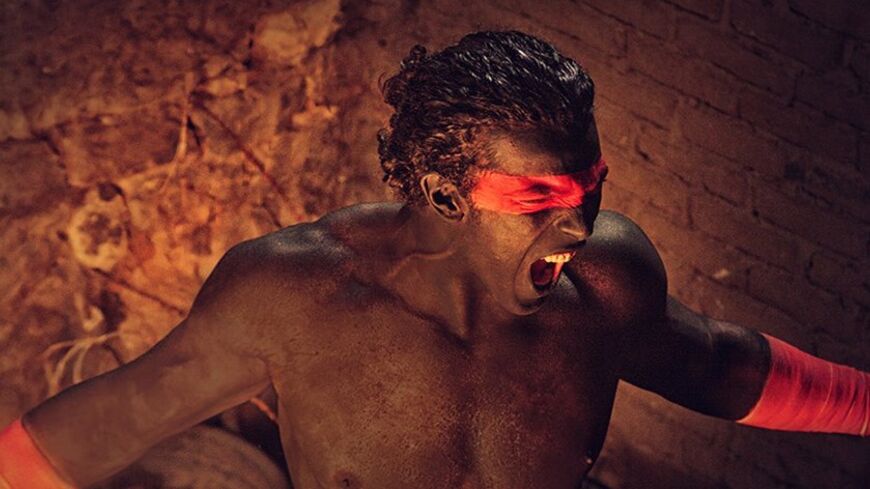 Ramy Essam is best known for his heady performances in Tahrir Square during the 18 days of the January 25 Revolution. His song, "Irhal!' ("Leave!"), became an anthem for the mass street protests against Hosni Mubarak's 30-year dictatorship: "We are all united, we demand one thing: Leave! Leave! Leave!" He played hours before the "Battle of the Camel" — the surreal pro-Mubarak offensive on Tahrir Square — and during the clashes was hit on the head with a rock. A foreign camera crew filmed him there the next day, head bandaged and defiant: "We will stay here until Hosni Mubarak goes. … I will sing again, I will not stop singing until [he] goes."

Ramy's performances in Tahrir Square against Mubarak and then the Supreme Council of Armed Forces feature in the Oscar-nominated documentary, "The Square." It tells his story from the 18 days and beyond: his hopes for the revolution; guarding the entrances to the square; and then being picked out by soldiers during the brutal March 2011 clearance and taken to the Egyptian Museum where he was beaten and subjected to electrical shocks for hours.

Inside a recording studio not far from the western banks of the Nile, Ramy comes bursting through the mixing room door. He is preparing some new material. "For the last three years the atmosphere has been all about the revolution," he says. "But I want to sing about everything, not just the revolution." Still, Ramy denies he is moving on. "I can understand if people are trying to find new ways of fighting, but I don’t stand with people who want to give up."

Ramy is back in Cairo for the first time since traveling back to his family home in Egypt's Nile Delta in early December 2013, after reports that an arrest warrant had been issued for him. Four others were purportedly earmarked for arrest: prominent labor activist Haitham Mohamadeen, April 6 Youth Movement members Sherif al-Rouby and Zizo Abdou, and Sayed Sobhy. Authorities later denied this, and they were not arrested. Three others, including the April 6 Youth Movement's Sherif al-Shirfy, were, and they are to be tried on Jan. 22.

Human rights lawyer Ragia Omran, who is also featured in "The Square," said she contacted prosecutors who denied the existence of the warrants. Ramy's lawyer, Sayed Sobhy, confirmed this but added, "Sometimes in big cases, a lot of names get mentioned during the investigation." Ramy got mentioned, he says.

"Having your name in the investigation could be the basis for a future warrant," Sobhy explains. There may be no warrant now, but for Ramy the threat is real enough. "If they come to get me, I will have to face it," Ramy says.

The case relates to Ramy's alleged involvement in the vandalism of the "martyrs' memorial" in Tahrir Square, unveiled by Prime Minister Hazem el-Biblawi just before the anniversary of the Mohamed Mahmoud Street clashes in November 2013. Within hours, activists had spray-painted, decimated and torn away at the memorial. "I wasn't there when they destroyed the monument," Ramy says. Videos show him dabbing red paint across the brickwork — "A symbol of blood, the blood of the martyrs" — but Ramy says that was as far as it went.

Then, Ramy's name on the list seemed like another suggestion the post-Morsi crackdown was beginning to morph and spread, just like Mohamadeen's arrest in September — on charges of "membership of a secret organization" (the Revolutionary Socialists) — had suggested leftists were in the cross hairs as well. Both are known for playing roles, albeit very different ones, in Egypt's 2011 revolution. But with journalists in jail facing terrorism charges, continued mass arrests of "Brotherhood supporters" and key January 25 Revolution activists imprisoned, the Egyptian crackdown is now well past suggestion. It is an explicit, living thing.

Last time I spoke with Ramy was the day the warrants were first reported. Over the phone we discussed the news, Egypt and the baby his wife was expecting. "This [warrant] could be activated at any time," he said. "But I'm ready for it."

"It's not easy for an artist to create in this atmosphere," Ramy says, back in the studio. "Especially if you are independent or if you are actually singing against the regime." Instead, Egypt has seen an explosion of pro-regime "art," perhaps best characterized by the ubiquitous pro-army anthem "Teslam al-Ayadi," which heavily soundtracked Egypt's two-day constitutional referendum this week but also the country's hand-brake turn toward nationalism.

"I hate all this art," Ramy jumps in. "I hate the feedback from the Egyptian people, I hate the spirit of the 90% of Egyptians who are really very happy because the Muslim Brotherhood are getting killed every day, put in jail and tortured. … I hate the Brotherhood, but I'm still human."

"Now the famous actors and singers who supported Mubarak before the revolution are supporting [Gen. Abdel Fattah al-] Sisi." Tamer Hosny, another mainstream singer who was kicked from Tahrir Square in 2011 for initially siding with the regime, celebrated Morsi's ouster on Twitter: "God praise you Sisiiiii and praise Egypt." Pop singer Amr Mostafa recently called for his Facebook fans to like a status if they agreed that Muslim Brotherhood supporters should be executed without trial. Eight-thousand people gave the thumbs-up in less than 24 hours.

Like many of Egypt's activists, filmmakers, artists and writers, Ramy has had to acclimatize to new, often hostile, circumstances. "I face lots of problems, especially with venues and organizers who are afraid to give me the chance to play. All producers are afraid to produce my tracks. It's impossible to get my songs played on TV or radio stations."

"If the regime doesn't want you in the spotlight, they can do that."

Ramy is releasing a new song, "Ma7nash min dol, min dol" ("We are not from them"), independently over the Internet before the January 25 Revolution anniversary. The title is a reference to the army, the Muslim Brotherhood and the feloul (regime remnants), a sense of belonging in no longer belonging at all.

"I criticize all the politicians," Ramy says, "but especially Sisi, because he is the strongest." But criticizing Sisi is not very popular in Egypt at the moment. The in-thing is to praise him.

"Maybe I will suffer. I might be arrested for my songs," Ramy concedes. Then again, he has been living with that thought for a while now — since the 18 days of the revolution, his torture in the museum, the day the monument fell.

"I'm happy that we destroyed it," Ramy tells me. "For me, it was a message that we don't want anything from them [the regime]. I think they got that message."

Some in Egypt are saying the revolution is dead. Ramy believes culture is the best alternative while the uprising is "on hold."

"The closest weapon we have in our hands now is art — songs, movies, documentaries, independent shows on YouTube, graffiti — we have to use them to spread the message," he says.

"Of course I want the people back in the streets chanting against the system, but our best option now is art."