Anniversary of Egypt's revolution: Celebrate or be killed

Protesters and journalists are attacked and killed on third anniversary of Egypt's January 25 Revolution. 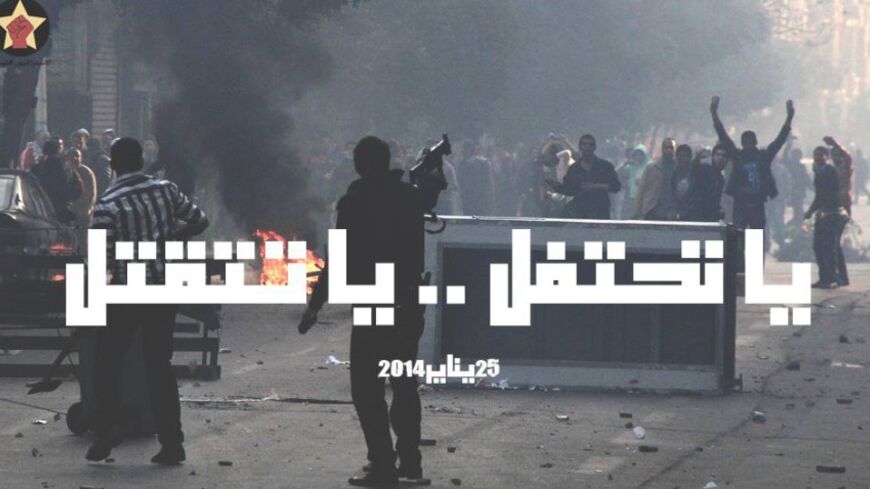 CAIRO — On Jan. 25, armored vehicles, machine guns, barbed wire, metal detectors and dozens of police and military personnel surrounded Tahrir Square. This was only the first cordon filtering whoever wanted to reach the square where an 18-day uprising that ousted iron-fisted dictator Hosni Mubarak broke out exactly three years before.

Inside the square, a state-of-the-art stage replaced the shaky wooden ones erected in 2011 — this time equipped with massive speakers and lighting systems that by nightfall were seen flickering around Cairo's sky from miles away. Throughout the day, the stage featured dozens of regime applauders, including a police officer in full uniform singing the national anthem, folkloric dance troops and prominent singers.

In short, an event management guru planned this and many financed it. It was anything but spontaneous.

Tens of thousands of people gathered in the square, carrying Egyptian flags and holding posters bearing photos of Egypt's Defense Minister Gen. Abdel Fattah al-Sisi, of Egypt's late president Gamal Abdel Nasser and even of Mubarak. The crowd that occupied the square until midnight was the second layer of civilian-security sifting: A photo of Sisi or a banner emblazoned with a poetic slogan urging him to run for presidency would grant whoever was carrying it full immunity. Those without such protection tools could see an angry mob turn against them in a matter of seconds and in a manner described by many as simply bloodthirsty.

Tahrir Square was a deadly trap for anyone who is not publicly and boisterously applauding the current military-backed regime. Several journalists were harassed or attacked by regime loyalists and by noon, it was clear that foreigners were considered spies. Journalists and photographers — except for those working for a few pro-regime local channels — were accused without investigation of being Al Jazeera reporters and many were thrown out of the celebration ground.

"Dear foreign journos: if you absolutely must go downtown today, put your cameras & notebooks away and keep moving," Ashraf Khalil, an independent journalist and author of the book Liberation Square, warned on his Twitter account.

A few miles away from Tahrir Square, dozens of Muslim Brotherhood members had decided to hold a protest in the Mohandeseen district, the same area where several liberal, youth and leftist movements had decided to stage their separate protest. But they were clearly the same in the eyes of the brutal central security forces.

The police crackdown immediately kicked off at both gatherings before they could begin their intended marches. In a few minutes, members of both protests were fleeing into side streets to avoid heavy gunfire and racing military and police vehicles.

"I arrived right after the dispersal and was assaulted by police officers as soon as I showed up near the protest site," said Tarek Shalaby, a leading member of the Revolutionary Socialists Movement, which was among other movements organizing the dispersed protest.

Shalaby is one among dozens of prominent youth activists who played a major role in the Jan. 25 protests in 2011 and continued to fuel the opposition protests against the interim Supreme Council of the Armed Forces (SCAF) that ruled between Mubarak's downfall and the rise to power of the Muslim Brotherhood’s Mohammed Morsi. But that wasn’t the end for Shalaby: Along with his mother movement, the Revolutionary Socialists, he continued opposition activities until Morsi's ouster on July 3.

But on the third anniversary of the revolution, he was looking for a hideout and spent hours dodging the hostility of pro-regime demonstrators and the deadly crackdown by police forces.

In a scene very reminiscent of protests crushed by Mubarak's security in the years prior to 2011, non-Brotherhood opposition protesters gathered less than a mile from Tahrir Square in front of the Press Syndicate, a spot that witnessed thousands of people viciously assaulted and detained under Mubarak.

"I knew that police forces would attack us in front of the Press Syndicate at any moment," said Shalaby.

Within minutes of his arrival, armored vehicles rolled onto the protest ground and randomly fired its machine guns.

"Everyone ran for their lives, armored vehicles were driving insanely as they shot in every direction."

Shalaby found himself stranded with a friend a few blocks from Tahrir Square. "Both the police and the pro-regime demonstrators were chasing us; it was either detention or vicious beatings by ordinary people," he said.

"I finally picked up a poster of Sisi I found on the street, I kept it with me and pretended to be one of them," he said, referring to the pro-regime demonstrators.

What he feared turned out true a few minutes later. A random man stopped him and checked the poster and asked a few questions to make sure he was neither a member of the Muslim Brotherhood nor the April 6 Movement.

"Sisi's poster saved us; this man was one of dozens hunting anyone escaping the dispersed protest," said Shalaby. "If I hadn’t picked up that poster, I would’ve had to pretend to be a regime lover and even then I could’ve been a victim of someone's suspicion."

By late night, reports of deaths were fluctuating between 10 and 29, and by the morning of Jan. 26, the number had risen to more than 50 slain protesters across the country, around 300 injured — including journalists and photographers — and more than 1,000 detained.

The majority of the deaths occurred around the two Muslim Brotherhood protests in northern Cairo, where bloody confrontations continued for hours. Three deaths were reported during the dispersal of the downtown protest.

Officials of Cairo's Central Morgue reported to local newspapers that the majority of deaths were caused by live ammunition.

"Comparing the numbers of deaths between our protest and the Muslim Brotherhood ones, I think the police were warning us that we would be killed if we confronted them. But it's apparent that the Brotherhood weren't warned, they were just killed."

Shalaby, who held on to Sisi's poster until he made his way out of central Cairo, believes that Egypt's police forces have become more vicious "knowing that people wouldn't question their bloody crackdowns on the opposition, and that in fact they would join to help the police.

"Some people are volunteering to assault and detain anyone opposing the regime, like the man [who] stopped us to check whether we were with him or should be attacked."

Shalaby’s movement, the Revolutionary Socialists, had published a photo of confrontations in a downtown street emblazoned with a slogan that precisely described the third anniversary of Egypt's revolution.