Deadly Violence Breaks out in Egypt Ahead of June 30 Protests 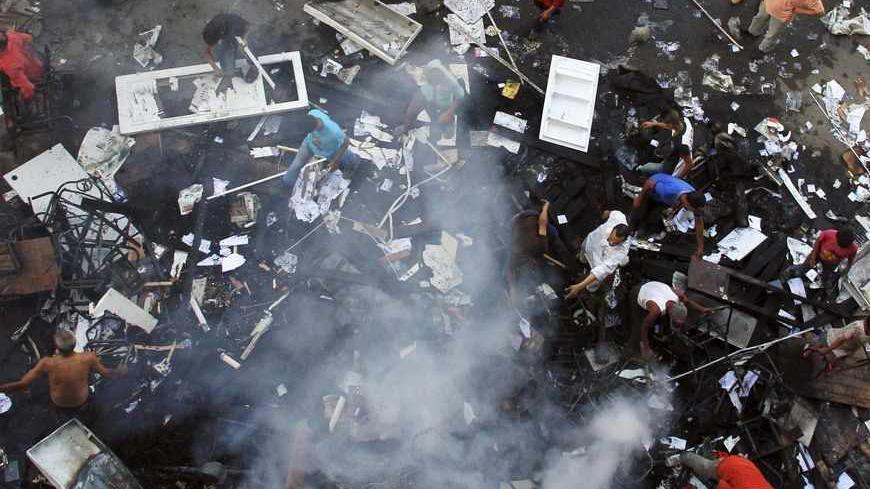 A scene of the aftermath of a fire that was set in the headquarters of the Muslim Brotherhood's Freedom and Justice Party by anti-Morsi protesters during clashes between them and supporters of Egyptian president Mohammed Morsi in Alexandria, June 28, 2013. -

CAIRO — Deadly clashes broke out across Egypt a day before the massive protests scheduled for June 30, while both supporters of President Mohammed Morsi and others demanding his ouster announced open-ended sit-ins and erected tents and stages in different neighborhoods around the capital, Cairo.

In Alexandria, armed confrontations erupted between members of the Muslim Brotherhood movement and opposition protesters. Both sides of daylong, late-into-the-night battle were said to have used various kinds of firearms, mostly guns that use birdshot; dozens of protesters were injured.

During the clashes on Friday night, the Muslim Brotherhood’s Alexandria headquarters was set ablaze as one of its members was shot dead, while American English teacher Andrew Pochter, 21, who happened to be at the deadly scene, was stabbed to death. A 14-year-old died on Saturday after suffering critical injuries hours earlier.

The US Embassy warned its citizens against traveling to Egypt and began a partial evacuation of its staff.

Alexandria’s Northern Military Command and forces deployed by the security department failed to contain the violence that continued for more than 12 hours. A Ministry of Interior statement announced that two police officers and several personnel were injured.

In Port Said, an explosion at a protest site killed an Egyptian journalist and left 12 others with serious injuries. No official statement was made regarding the deadly explosion that was heard all around the city; some unconfirmed reports alleged that a homemade explosive package was hurled at the protest by an unidentified person.

As the strife continued, President Morsi and his administration stood silent as nine members of the parliament’s upper house resigned.

Nadia Henry, one of those resigning, read a collective statement: “Today we join the national will and declare our mass resignation.” She spoke at the Saturday press conference held by the Tamarod (Rebel) Initiative, which announced that the number of anti-Morsi signed forms reached 22 million.

Meanwhile, dozens of opposition tents were erected around the eastern Cairo presidential palace. Posters carrying the now-becoming-popular phrase “Come down in protest” were stuck on the tents and handed out to cars driving by the sit-in. Insults, political slogans and anti-Morsi graffiti were spray-painted on the massive cement barricade built around the presidential palace over the past week.

“Morsi is now a killer responsible for any attacks either by his supporters or the opposition. There is no room for reconciliation or second chances, he must and will leave,” said Hamdi Hamza, a 70-year-old retired government employee.

“The Muslim Brotherhood and Morsi proved to be a disaster to what is left in Egypt, they occupied the country and instead of rescuing it; they destroyed it further,” added the former soldier who was deployed on the front lines of Egypt’s war with Israel between 1967 and 1973.

“The only reason he is in power is that we chose him over Ahmed Shafiq, Hosni Mubarak’s alter ego,” continued Hamza. “We now regret it and we will topple him.”

A few miles away, the Muslim Brotherhood led several Islamist parties and movements in a massive sit-in. Dozens of bearded men wearing helmets and armed with batons and homemade metal shields blocked every road leading to the pro-Morsi rally. They checked IDs and searched everyone walking in.

Hundreds of Islamists chanted pro-Morsi slogans as they waved their thick wooden and metal batons, while others sat in makeshift tents, also with batons sitting beside them.

“We are afraid of any attacks on our protest, we haven’t attacked anyone and we will not,” Samir Fayed, a 39-year-old engineer who joined the sit-in two days ago, told Al-Monitor. “It is like the door to my house, you cannot blame me for keeping it shut.”

Fayed blamed the opposition forces for “not joining hands with Morsi administration officials as they represent everyone who elected them.” He insists that Morsi’s year in office hasn’t been long enough to carry out satisfactory reforms, which explains some of the popular anger but “doesn’t justify toppling him and scrapping his legitimacy.”

Several other Morsi’s supporters refused to speak with Al-Monitor, but did make phone calls seeking someone who seemed to be known by everyone. A few minutes later, Mahmoud Sabry, 36, who introduced himself as a “Morsi supporter,” arrived to answer Al-Monitor’s questions.

“All of the opposition demands and protests are financed and supervised by the remnants of Hosni Mubarak’s regime,” said Sabry, who stood surrounded by men carrying a massive Muslim Brotherhood flag.

“As for collecting signed petition forms, anyone can collect, forge or claim they collected millions, but none of this will replace democracy and the elections that happened after decades of oppression and corruption.”

While Sabry spoke to Al-Monitor, members of the Muslim Brotherhood movement erected barricades and sand barriers around the Cairo headquarters in Moqattam district, an area that witnessed bloody clashes in late March 2013.

Several leading opposition movements, including the Popular Current, a coalition of leftist parties and youth movements, and the famous April 6 Youth Movement, published maps of their planned marches to the presidential palace on June 30, the day marking President Mohammed Morsi first anniversary in office.

In anticipation of violent confrontations and attacks on government facilities, Egypt’s military and its police and health departments started deploying troops, armored vehicles and ambulance units in and around protest sites.