President Morsi refuses to budge despite the pressure put on him by the military, protesters and President Obama. 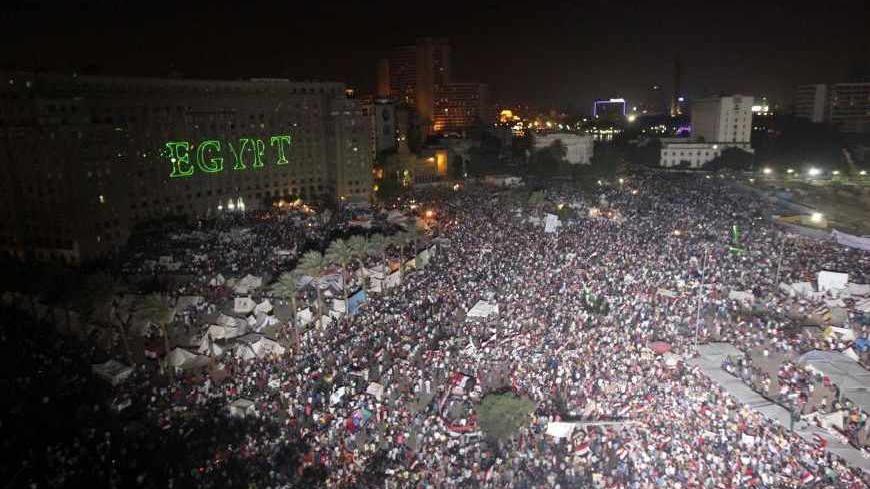 CAIRO­ — Millions of demonstrators continued their sit-ins across Egypt on Tuesday [July 2] for the third consecutive day of what is said to be the biggest protest in the history of the volatile nation. Hundreds of thousands surrounded President Mohammed Morsi’s main presidential palaces in eastern Cairo and spray-painted “Game Over” on the gates of the Qubba Palace, where he relocated on Sunday [June 30].

Earlier on Tuesday, a statement by the White House announced the details of US President Barack Obama’s phone conversation with Egypt’s first freely elected president, Mohammed Morsi. Obama’s remarks were made a few hours after Egypt’s military threatened to intervene and impose a roadmap for the country’s immediate future if the public’s demands weren’t met by Wednesday afternoon.

“President [Obama] told President Morsi that the United States is committed to the democratic process in Egypt and does not support any single party or group,” the White House statement said, “He stressed that democracy is about more than elections; it is also about ensuring that the voices of all Egyptians are heard and represented by their government, including the many Egyptians demonstrating throughout the country.”

“President Obama encouraged President Morsi to take steps to show that he is responsive to their concerns, and underscored that the current crisis can only be resolved through a political process. As he has said since the revolution, President Obama reiterated that only Egyptians can make the decisions that will determine their future.”

Obama’s message to his Egyptian counterpart was viewed by a lot of Egyptians as a shift in the US approach to the intensifying situation based on its interests, not as an endorsement of the popular will.

A statement by US Ambassador to Cairo Anne Patterson in early June sparked a wave of anger among Egypt’s opposition and activists that is shown clearly by anti-Morsi posters crossing her face with an X.

“Some say that street action will produce better results than elections. To be honest, my government and I are deeply skeptical," Patterson had told an audience of mostly activists in an early June meeting. "More violence on the streets will do little more than add new names to the lists of martyrs. Instead, I recommend Egyptians get organized.”

The Egyptian presidential spokesman’s official Facebook page had its own interpretation of the phone conversation. “President Obama confirmed that the US administration continues to interact with the elected Egyptian administration and supports the peaceful democratic transformation in Egypt.”

Hanan Fikry, a top officer of Egypt’s Press Syndicate and founder of One Nation For Freedoms, a local nongovernmental organization, told Al-Monitor, “US pressure is helpful but unnecessary.”

“Decisions will be taken by the masses ruling the country by their presence and mobility; they aren’t waiting for Obama to tell Morsi what to do, the Egyptian people are already in power,” Fikry said.

“Patterson’s earlier remarks and Egypt’s reaction is a lesson for the United States, they should understand that the ambassador, from now on, will remain here if the people want them.”

Hanan believes that Obama’s remarks clearly present that the US administration finally understands that Morsi will leave despite the backup they voiced for his administration. She said it’s a similar scenario to ousted President Hosni Mubarak, who was also abandoned by the US after decades of endorsement.

Banners emblazoned with photos of Obama and Patterson with X marks or with slogans condemning US intervention in Egyptian politics were carried by protesters across the country.

Anwar Mohamed, a 28-year-old protester, told Al-Monitor at Tahrir Square that “any Egyptian president will become corrupt if endorsed by the United States.”

“The Egyptian president should choose between attending to Western interests and being overthrown like Mubarak and Morsi, or taking care of his people and being remembered by Egyptians forever,” said Mohamed, who believes that Morsi is already ousted. “We are waiting for him to get out of the palace, he is not a president anymore.”

Meanwhile, Egypt’s opposition coalitions, including the National Salvation Front, Tamarod (Rebel) Initiative and the Popular Current, declared Mohamed ElBaradei, Egypt’s 2005 Nobel Peace Prize winner and former head of the International Atomic Energy Agency, as an official delegate to represent them in talks with the Egyptian military.

“The Popular Current supports the delegation of Mohamed ElBaradei to represent the opposition forces through the second phase of the revolution that started on June 30,” said a statement by Hossam Mo’nes, spokesman of the Popular Current, a coalition of leftist and Nasserite parties led by Hamdeen Sabahi, the former 2012 presidential candidate.

Less than a day to the deadline stated by the military’s statement on Monday, unnamed military sources told Reuters, “Egypt's armed forces would suspend the Constitution and dissolve an Islamist-dominated parliament under a draft political roadmap to be pursued if Islamist President Mohammed Morsi and his opponents fail to reach a power-sharing agreement by Wednesday.”

“The Supreme Council of the Armed Forces (SCAF) was still discussing details of the plan, intended to resolve a political crisis that has brought millions of protesters into the streets. The roadmap could be changed based on political developments and consultations,” Reuters quoted the sources as saying.

By nightfall, deadly clashes broke out in several Cairo neighborhoods and other cities around Egypt. Islamist supporters staged rallies in several areas after a call by the coalition of Islamist forces leading rallies in support of Morsi. Several local television channels reported five deaths and dozens of injuries as street battles continued.