Will Egyptian President Abdel Fattah al-Sisi's decision to renounce Egyptian control of two Red Sea islands to Riyadh be the straw that breaks the camel’s back, amid widespread anger at the government policies? 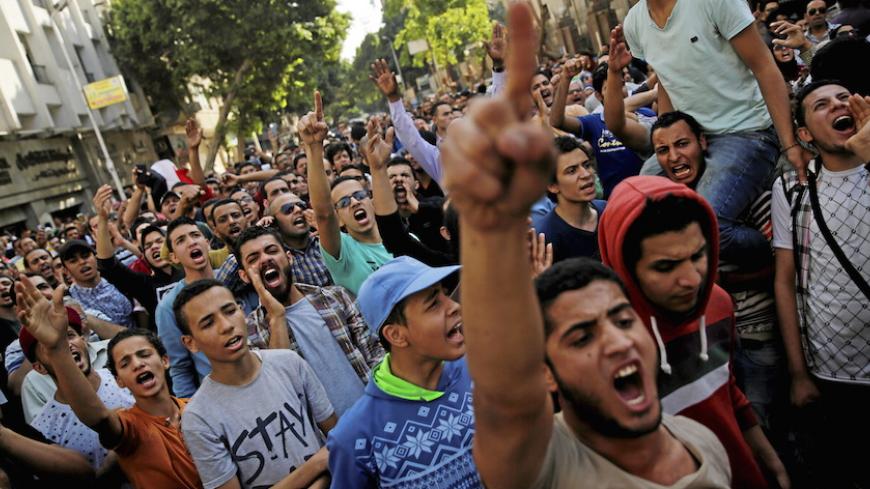 CAIRO — Protesters took the streets of Cairo April 15 chanting “Arhal" ("Leave") — the same slogan that was ubiquitous during the January 25 Revolution when protesters called on then-President Hosni Mubarak to step down. Massive protests and sit-ins were organized in various parts of Cairo, including the city center, on the so-called Friday of the Land. The demonstrators objected to President Abdel Fattah al-Sisi’s giving up ownership of the islands of Tiran and Sanafir to Saudi Arabia during the recent visit of King Salman bin Abdul-Aziz Al Saud to Egypt.

The protesters chanted slogans such as “Bread, freedom and the islands are Egyptian,” a modification of the iconic “Bread, freedom and social justice” slogan of the revolution, and “Awad sold his land,” a reference to an Egyptian folktale about a man named Awad who brought his family shame by giving up the family farm. Other chants could be heard condemning the transfer of the Islands, which had been under Egyptian control.

Despite the political and security measures that had succeeded in thwarting previous demonstrations, the protesters have returned to the streets to denounce Sisi’s policies. In the same squares that witnessed the outbreak of the January 25 Revolution, hundreds of protesters rallied and marched to various locations in downtown Cairo, with thousands gathering in front of the Journalists Syndicate after the security forces closed and denied access to Tahrir Square.

During the march from Sayyida Zeinab Square to the center of the capital, Al-Monitor spoke with a number of protesters who said that the demonstrations aim to quash Sisi’s decision of relinquishing Tiran and Sanafir, and that they demand full Egyptian sovereignty over the islands.

Essam Khalil, one of the protesters, told Al-Monitor, “The January [25] Revolution has yet to end. Our protest is peaceful. Today the people are saying 'no' to this bad deal. We will not wait around for the parliament to reject [Sisi’s decision]. It is obvious that the members of parliament have blessed this deal ever since they 'hailed King Salman' and gave him the opportunity to address parliament as a sign that they are upholding Saudi Arabia’s position disregarding Egypt’s historical right to the islands.”

The protesters’ enthusiasm and determination to continue organizing events to force the parliament to reject the deal was obvious; they even discussed with Al-Monitor proposals of organizing trips to Tiran Island from the city of Sharm el-Sheikh to raise the Egyptian flag there.

Political activist Ahmed Abdullah told Al-Monitor, “What's happening today is the beginning of a popular movement against Sisi’s decisions. We have started to break the barrier of fear and despair of staging protests.”

He added, “While most protesters today are liberals and leftist activists, there is a large-scale public objection to the regime's policies. By nature the Egyptian people are attached to their land, and historically most Egyptians worked in agriculture. Land for Egyptians is a matter of honor.”

In light of a massive deployment of security forces, particularly in downtown Cairo and Tahrir Square, frictions between protesters and security forces were limited to the start of the protests.

The Central Security Forces, however, intervened to break up the protests in downtown Cairo and in the Giza and Mustafa Mahmoud squares in the Mohandeseen district by using tear gas and buckshot and rubber bullets.

The protesters had disregarded the Ministry of Interior’s warnings not to respond to calls to take part in these “tendentious” protests, especially in light of the statement issued by the Muslim Brotherhood calling for participation in the protests and the media attacks by Sisi’s supporters accusing the protesters of being traitors and “agents.”

In an attempt to prevent the protests from deviating from their main objective — namely preventing the transfer of the islands and recovering their ownership — the crowd chanted, “Unite your ranks, shoulder to shoulder, our objective is one.”

In front of the Journalists Syndicate, where the largest crowd gathered, lawyer and political activist Khaled Ali spoke to Al-Monitor about the need for continuing the revolutionary movement against the transfer of the islands, calling on protesters to sign petitions to support the case brought before the Egyptian judiciary to challenge the constitutionality of the Saudi-Egyptian agreement.

Mahmoud Hussein, a young man in his 20s, told Al-Monitor, “I participated in the rebellion against the Brotherhood and supported Sisi at the beginning of his reign since he called for fighting terrorism, protecting the Sinai Peninsula and reforming the economy. I now realize that he was promoting illusory projects and this is evidenced by the fact that he has sold off part of the state for a few billion [dollars] as a temporary solution to the collapsing economy.”

The protesters agreed to end the sit-ins, setting April 25 — Sinai Liberation Day — as a date to return to the streets again if the government does not respond and renounce the transfer deal. It seems that the April 15 protests were just a warning to the regime and an expression of anger that prevails among many Egyptians.

Ambassador Masum al-Marzouki, former assistant to the minister of foreign affairs and a member of the popular movement, told Al-Monitor, “The popular movement did not end with Friday’s protests. What happened was a form of strong popular pressure that could force the regime to renounce the deal and apologize to the people.”

As the angry protesters filled the streets of Cairo, Sisi was on an inspection visit to follow up on the execution of the Galala city project on the highest plateau of the Galala Mountain in the Red Sea area. Sisi held an open dialogue with a group of young supporters of his political program on the shores of the Red Sea, warning of what he called "national suicide and acts undermining the will of the Egyptians."

Sisi spoke with a number of representatives of social movements, editors-in-chief of Egyptian newspapers and some members of parliament in a meeting called "the Egyptian Family," where he strongly condemned the offensive reactions against the maritime demarcation agreement with Saudi Arabia. He said, “This was a stab in the heart. The agreement only gave back a right to its rightful owners and was not a land sale agreement,” demanding Egyptians not to talk about the agreement. “They only hurt themselves by talking about this,” he said.

The scene of the massive protests that rocked the Egyptian streets for the first time since Sisi’s rise to power is a new indicator of the state of public anger and outrage in Egypt, which may continue against the political messages that the president and the government are trying to pass about Sisi’s ability to contain crises and lead Egypt to a better future on all internal and external reform levels.