Cairo tries to reassure citizens and Israel amid island controversy

The announcement that Egypt would be ceding control of two disputed Red Sea islands to Saudi Arabia has provoked outrage domestically and raised concerns in Israel. 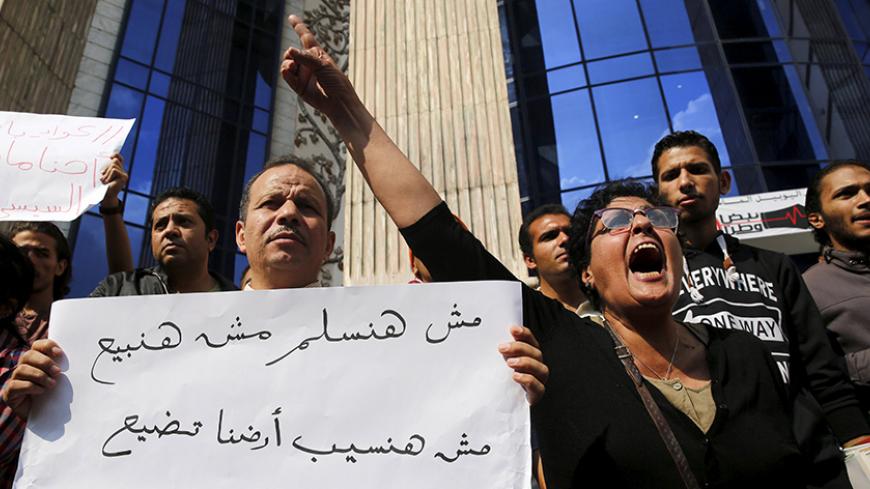 Egyptian activists in front of the Press Syndicate in Cairo shout slogans against President Abdel Fattah al-Sisi and his government during a demonstration protesting the government's decision to transfer two Red Sea islands to Saudi Arabia, April 13, 2016. The sign reads, "We will not surrender and will not sell, we will not let our land to be lost." - REUTERS/Amr Abdallah Dalsh

CAIRO — Despite the warm welcome given to Saudi King Salman bin Abdul-Aziz Al Saud by Egyptian official institutions and media outlets from the moment he arrived in Cairo on April 7 on his first official foreign visit since ascending to the throne in January 2015, the visit was quickly marred by widespread controversy and anger. Soon after his arrival, official talks began and an announcement was made about the signing of a maritime border agreement, under which Egypt relinquished ownership of Sanafir and Tiran — two Red Sea islands — to Riyadh.

After a full day of secrecy about the provisions of the maritime border agreement that Egyptian Prime Minister Sherif Ismail signed April 8 during an official ceremony attended by the Egyptian president and the Saudi monarch, the Council of Ministers announced in a press release that the agreement recognized that Sanafir and Tiran islands were located in Saudi territorial waters. This thus gave Riyadh full ownership and sovereignty over the islands.

The government’s statement recognizing Saudi ownership over the islands caused anger that spread through social networking sites. Thousands of people used the hashtag #Awad_Sold_His_Land — in reference to an Egyptian folk figure who brought shame upon his family after selling the family farm — to express their ire concerning the abandonment of the Egyptian islands. In addition, numerous maps and documents, taken from official Egyptian websites or educational curricula, affirming Egyptian ownership of the islands were disseminated. Opposition to the agreement was not confined to Internet blogs, as a number of lawyers filed lawsuits before Egyptian courts objecting to their government’s signing of the agreement, while signatures were being collected rejecting the agreement.

The government attempted to contain the popular anger through a new press release that followed the Saudi king’s departure from Cairo on April 12, to which it attached a number of documents asserting Saudi ownership of the two islands since the latter requested that Egypt provide them with protection in 1950. The Council of Ministers’ statement also included a 1950 classified cable by the American ambassador to Cairo, as well as other Egyptian correspondence to the United Nations proving Saudi sovereignty over the two islands.

The islands of Tiran and Sanafir are of particular strategic importance due to their location in the strait that separates the Gulf of Aqaba from the Red Sea; this can provide control over maritime navigation in the region as a whole. The two islands also fell under the control of multinational forces due to their being included in Zone C of the 1978 Camp David Accords, which say that neither Egypt nor Israel are allowed to hinder maritime navigation through the Strait of Tiran.

Concurrently, the timing of this agreement and the announcement that the islands belonged to Saudi Arabia raised many questions about potential Egyptian political or economic gains resulting therefrom. There are also unknowns concerning issues related to the Camp David Accords and Saudi Arabia’s ability or willingness to abide by their provisions, particularly considering that Saudi Arabia has not recognized the existence of the Israeli state and views Israel as an enemy.

In an exclusive interview with Al-Monitor, Ismail said, “The negotiations and meetings that preceded the signing of the agreement with the Saudi side dealt with all issues related to the status of the islands under the Camp David Accords. The Egyptian Foreign Ministry discussed, with all relevant parties, the special arrangements pertaining to this issue. Nothing in the agreement stipulates that Egypt would receive 25% of the islands’ natural gas or oil reserves; however, under any exclusive maritime economic zone agreement, exploitation of proven natural gas or oil reserves located on the center line that divides the respective zones of two countries shall be divided in proportion to the reserves located in each of the countries.”

In a letter that seemed addressed by the Egyptian regime to the international community, Egypt’s official Al-Ahram newspaper published a front-page report on April 11, confirming that Cairo informed the Israeli side of the minutiae of the Agreement on Maritime Delimitation in the Gulf of Aqaba, and any repercussions thereof on the peace accords. Cairo also provided assurances and guarantees that Saudi Arabia would respect the terms of the accords as they related to the status of the two islands, the presence of international troops thereon, the guarantee not to use the islands for military purposes or to hinder maritime traffic through the Gulf of Aqaba. This is despite the fact that Saudi Foreign Minister Adel al-Jubeir stated in a press conference in Cairo that “no agreements would be signed with Israel concerning the islands of Sanafir and Tiran.”

A former Egyptian assistant foreign minister for Arab affairs, Ambassador Hussein Haridi, told Al-Monitor, “The islands will become Saudi once the agreement is ratified. Saudi Arabia was not a party to the Camp David Accords, so international law does not compel it to abide by the provisions of these accords.”

The agreement remains subject to the approval of the Egyptian parliament pursuant to stipulated constitutional procedures. But the speech given by Salman from the speaker’s podium in parliament, and the generous ovation he received from parliamentarians, represented a public endorsement of the terms of the agreement.

Member of parliament and former Foreign Minister Mohamed Orabi told Al-Monitor, “The agreement shall be thoroughly reviewed by the parliamentary Defense and National Security Committees, and a detailed position in its regard made available to the public after deliberations.”

A diplomatic source with the Department of Arab Affairs at the Egyptian Foreign Ministry drew a link between the timing of the agreement and the Egyptian-Saudi decision to begin building a land bridge between the two countries, which would pass through the islands of Sanafir and Tiran.

The source, which requested anonymity, told Al-Monitor, “The decision to build the bridge necessitated a number of prerequisite measures, starting with determining the ownership of the islands, and discussing securing the bridge, particularly in light of the peace accords’ provisions barring the presence of Egyptian security forces on the islands.”

After the first official round of talks with President Abdel Fattah al-Sisi, the Saudi monarch announced the building of a land bridge between Egypt and Saudi Arabia, a step welcomed by Cairo in view of its strategic importance on the political, economic and military levels. The warm reaction reached the point that the Egyptian minister of awqaf (religious endowments) characterized the plan as “mentioned in the Holy Quran,” despite it being previously rejected by former President Hosni Mubarak for reasons attributed by analysts at the time to Israeli and American pressure.

The controversy surrounding ownership of the two islands and the building of the bridge did not end with the visit of the Saudi king to Cairo. The road remains arduous before Egypt’s political administration in its anticipated negotiations to reassure Israel on one side, and appease domestic public anger on the other.