The governor of the Red Sea in Egypt revealed great gains for the Egyptian economy unknown by those opposing the controversial maritime border demarcation agreement with Saudi Arabia. 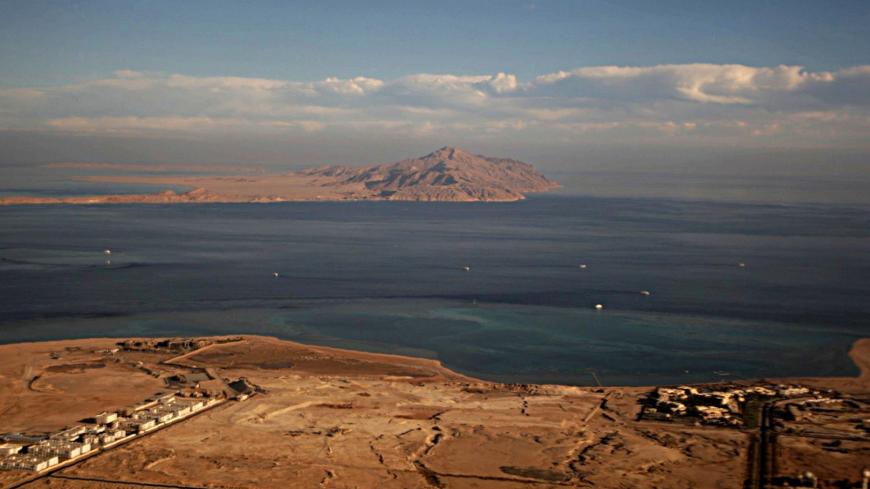 A picture taken through the window of an airplane shows the Red Sea's Tiran (foreground) and the Sanafir (background) islands in the Strait of Tiran between Egypt's Sinai Peninsula and Saudi Arabia, Jan. 14, 2014. - STRINGER/AFP/Getty Images

CAIRO — The issue of sovereignty over the two islands of Tiran and Sanafir in the Red Sea at the Strait of Tiran leading to the Gulf of Aqaba is once again making headlines in Egypt. The country had witnessed a wave of anger three years ago against the backdrop of the signing on April 8, 2016, by Egypt and Saudi Arabia of a maritime border demarcation agreement, under which Saudi Arabia gained sovereignty over the islands.

During a meeting with an Egyptian parliamentary delegation June 26, Red Sea Gov. Gen. Ahmed Abdullah revealed great gains for the Egyptian economy that are about to materialize as a result of the 2016 agreement. “A large number of people focused on the islands of Tiran and Sanafir and completely ignored the economic gains that the Egyptian citizen will gain,” he said.

According to Abdullah, Egypt has been able, after the agreement, to exploit the wealth in the Red Sea. He explained that the border demarcation agreement allows Egypt to drill in deep territorial waters because the International Law of the Sea defines territorial waters and economic waters as well as the equidistant line between countries. The International Law of the Sea does not determine the maritime borders between countries.

He indicated that the Ministry of Petroleum entrusted two international companies with the preparation of underwater surveys to help encourage international companies to invest in oil and gas discoveries in Egypt. He also noted that the Ministry of Petroleum launched a tender for 10 oil and gas exploration blocks off the Red Sea coast. “The new discoveries are expected to have a quantity of natural gas equivalent to that of Zohr field in the eastern Mediterranean,” Abdullah said.

In 2015, Egypt discovered its largest gas fields in the Mediterranean through Italy's Eni in Zohr field with gas reserves of 30 trillion cubic feet.

The Egyptian-Saudi border demarcation agreement sparked controversy in Egypt's political and popular quarters, and protests were staged in April 2016 against it. Egyptian lawyers resorted to the Supreme Administrative Court of the State Council, which issued in January 2017 a historic decision annulling the agreement and confirming Egypt's absolute sovereignty over Tiran and Sanafir. The court said the Egyptian government did not submit any document that could deny this fact.

However, in March 2018, the Supreme Constitutional Court of Egypt confirmed the validity of the 2016 agreement and invalidated the annulment pronounced by the administrative judiciary.

Meanwhile, Egypt's oil and energy engineering experts believe that Egypt is on its way to become one of the top natural gas producers in the Middle East region thanks to the demarcation agreement with Saudi Arabia.

Gamal Qalyubi, professor of petroleum and energy engineering at the American University in Cairo, told Al-Monitor, “Numerous Egyptian studies of the demographic layers in the Red Sea indicate that this is a strategic area, ranked second after the Mediterranean region, in the production of gas and oil. The Red Sea region has a very strong strategic economic impact on the world oil map. The Red Sea region starts from the Gulf of Suez and extends to Halaib and Shalatin area in southern Egypt.”

He added, “The successful maritime border demarcation between Egypt and Saudi Arabia will yield economic profits for both countries in terms of gas discoveries. The agreement will enable the kingdom to exploit the Red Sea as a safe alternative to the Arabian Sea region, where Saudi gas exploration investments are concentrated. This comes in light of the disruption in the Arabian Sea region due to the Iranian threats.”

Medhat Youssef, former vice chairman of the General Petroleum Authority, told Al-Monitor, “The demarcation of the maritime border between Egypt and Saudi Arabia has facilitated oil and gas exploration off the Red Sea coast of Egypt. South Valley Egyptian Petroleum Holding Company — the Ministry of Petroleum entity charged with managing all aspects related to petroleum activities of the Red Sea — had refrained from launching any international bids for three years amid reluctance and fear by foreign companies to enter the maritime area without a demarcation agreement under the International Law of the Sea.”

On March 10, the company announced the launch of an international tender for oil and gas exploration in 10 blocks of the Red Sea, with the deadline for receipt of bids set for Aug. 1.

Youssef noted, “The Egyptian Ministry of Petroleum in 2017 conducted a seismic survey about 10 kilometers [6 miles] within its Red Sea maritime borders as demarcated according to the agreement. The oil field services Texas-based company Schlumberger and Norwegian geophysical company TGS were entrusted with the survey aimed to determine the oil and gas prospects of the surveyed area. The two companies also launched a campaign to promote investments in the Red Sea region and succeeded in attracting giant international oil exploration companies, most notably US ExxonMobil, to take part in the gas and oil exploration bid launched by the Egyptian government.”

The Egyptian Ministry of Petroleum announced in November 2018 the results of the seismic survey that ended in April of the same year. The findings revealed clear signs of the presence of oil structures in Egyptian waters in the Red Sea, which, if proven, would mean that oil reserves prospects in the Red Sea are more promising and more likely than previously thought.

“No economic gains in return for giving up Egyptian land may be accepted,” Haitham al-Hariri, a parliamentarian who opposes the Egyptian-Saudi border demarcation agreement, told Al-Monitor. “The arguments raised by officials advocating the agreement in Egypt are rejected. Nothing justifies our waiver of Egyptian land against monetary consideration.”

Over the past three years, Egypt has been stepping up its efforts to make the most of the signature of the maritime demarcation agreement with Saudi Arabia. This is not only for the purpose of realizing Egyptian dreams of becoming a promising strategic region for the production of gas and crude oil in the Middle East but rather for winning over the Egyptian street and gaining its blessing for the demarcation agreement.