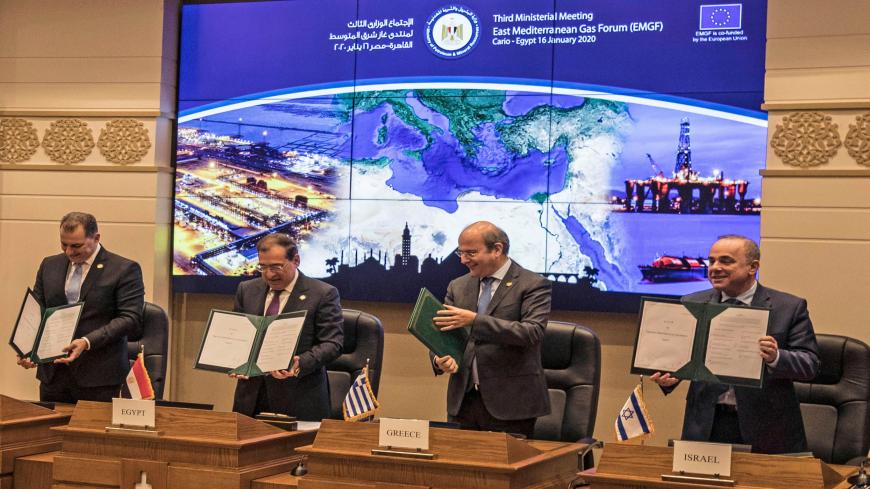 Egyptian President Abdel Fattah al-Sisi issued Oct. 10 a presidential decree to ratify the historic agreement signed with Greece on maritime demarcation, which helps establish the exclusive economic zone (EEZ) in addition to boosting cooperation in the energy field and benefit from riches available in the eastern Mediterranean region.

The agreement was inked in Cairo on Aug. 6 between the Egyptian and Greek foreign ministers. Greece approved the agreement of its maritime boundaries with Egypt on Aug. 27.

During the Aug. 6 signing ceremony, Egyptian Foreign Minister Sameh Shoukry said the accord “allows the two countries to maximize benefits in the promising gas and oil reserves,” especially since both countries are members of the East Mediterranean Gas Forum (EMGF).

Established in Cairo last year with the membership of Egypt, Greece, Cyprus, Italy, Palestine, Jordan and Israel, the EMGF aims at improving natural resources development as well as forming a regional gas market.

At the ceremony, Greek Foreign Minister Nikos Dendias described the agreement as “exemplary,” noting that it is regarded as a complete opposite of “the illegal, invalid and legally nonexistent memorandum of understanding between Turkey and Tripoli.”

In November last year, Turkey and Libya's internationally recognized government signed a memorandum of understanding on maritime boundaries in the Mediterranean Sea.

Egypt described the accord back then as “illegal and not binding or affecting the interests and the rights of any third parties.” Greece dismissed the controversial deal saying it ignored the Greek island of Crete, which lies between the two countries. The memorandum also was condemned by the European Union, which said it is a violation of international law that threatens stability in the region.

Egypt and Greece began talks on maritime border demarcation three years ago, at a meeting in Cairo between Sisi and then-Prime Minister Alexis Tsipras, during which they agreed to cooperate in exploiting the potential wealth in their national waters.

The Egyptian-Greek deal was welcomed by Arab countries. Sheikh Abdullah bin Zayed Al Nahyan, foreign minister of the United Arab Emirates, said it will enhance stability in the eastern Mediterranean region. He expected that the deal would “open up promising new horizons for Egypt and Greece within the bio-energy sector, helping both nations prosper and progress.”

Bahrain’s Ministry of Foreign Affairs issued a statement Aug. 7 saying it is an important and successful step for the two parties to achieve joint benefit from the available resources in the EEZ for each of them.

Samir Farag, senior strategist and a retired general, told Al-Monitor, “By demarcating the maritime boundaries, Egypt can be ready to work with international companies in its EEZ to explore oil and natural gas on a legal basis guaranteed by international law and of course without any external interference.”

He said, “Such [an] agreement preserves Egypt's rights in the region. Both countries can carry out all search and exploration operations, each in its exclusive area, without problems, and international exploration companies can pump investments in those areas after they have acquired the legal status."

Farag explained that the maritime borders are demarcated according to the 1982 United Nations Treaty on the Law of the Sea signed by all UN member states, where there are so-called territorial waters and so-called economic waters.

However, he added, if it is less than 400 miles, they are delineated by agreement with neighboring countries in a proportional and equal manner.

“It is not permissible to search for resources in those areas, except after agreeing on the method of equitably exploiting these natural resources with neighboring countries, as is the case of Egypt and Greece that are adjacent together at the maritime borders,” he said.

The recently signed Egyptian-Greek agreement is the third regarding the demarcation of maritime boundaries with neighbors in the Mediterranean Sea and Red Sea. In 2013, Egypt signed the same agreement with Cyprus and in 2016 with Saudi Arabia.

Rashad Abdou, an economist and head of the Egyptian Forum for Economic and Strategic Studies, told Al-Monitor that signing such agreements have a great impact on the Egyptian economy. “When Egypt demarcated the maritime borders with Cyprus, later we discovered [the] Zohr gas field in 2015,” Abdou said.

Zohr is the largest-ever gas discovery in the Mediterranean, located roughly 190 kilometers (118 miles) north of the city of Port Said.

“This discovery makes Egypt seek to achieve a strategic goal in the region — to be a global platform for exporting liquefied gas to Europe, given that it outperforms other countries with liquefaction plants that are located in Idku and Damietta,” Abdou noted.

Idku is a town situated to the east of Alexandria in the Beheira governorate; Damietta is located some 13 kilometers (8 miles) from the Mediterranean.

“The agreement also allows the two countries to push forward the tripartite agreement in regard to linking the electricity networks of Egypt, Greece and Cyprus,” Abdou added.

“By such agreements, Egypt [is] on the right track to boost economic development. As without energy there will be no foreign investments or exports,” Abdou concluded.