Turkish-Egyptian war of words in eastern Mediterranean heats up

In an official statement, Egypt warned of any violation of its rights in the eastern Mediterranean region in response to the official Turkish position, which refused to recognize the legality of the agreement between Egypt and Cyprus on the exploitation of natural resources of the two countries’ exclusive economic zones. 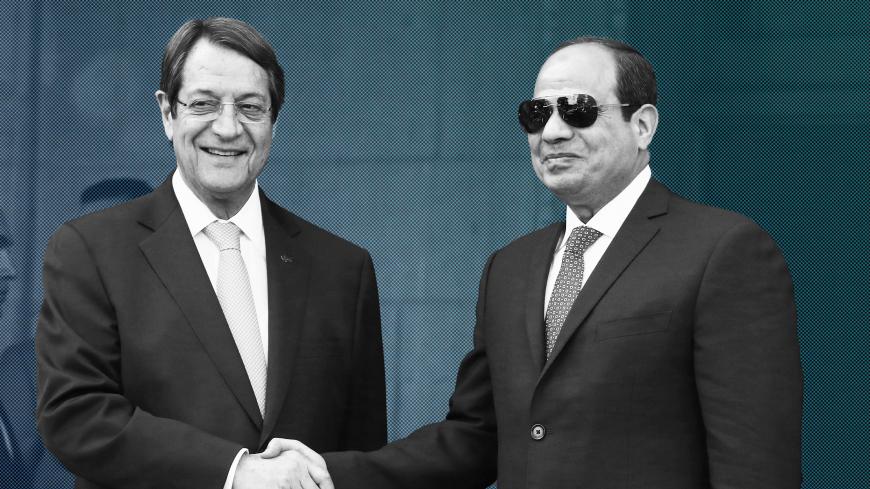 CAIRO — Egyptian Foreign Ministry spokesman Ahmed Abu Zeid warned in an official statement Feb. 7 against contesting the agreement on the demarcation of the maritime border between Egypt and Cyprus. He also warned against infringing on Egypt's sovereign rights in the delimited area, asserting that any attempt to do so was unacceptable and would be rejected.

The Egyptian position came in response to statements by Turkish Foreign Minister Mevlut Cavusoglu in an interview Feb. 4 with the Greek daily Kathimerini. Cavusoglu described as “null and void” the agreement signed between Egypt and Cyprus in December 2013 on the joint exploitation of hydrocarbon reserves on the median line between the two countries’ respective exclusive economic zones (EEZ) in the eastern Mediterranean. “We have clearly stated that the agreement violates Turkey’s continental shelf,” he noted.

Praising the Egyptian Foreign Ministry's position, Maj. Gen. Kamal Amer, the head of the Egyptian parliament's National Defense and Security Committee, asserted in a press statement Feb. 7, “It is a strong response that expresses Egypt's position, especially the Egyptian rejection of any infringement of its sovereign right to the EEZ.”

A number of bilateral agreements have been signed between Egypt and Cyprus on gas and oil exploration in the eastern Mediterranean. These include the 2003 maritime demarcation agreement and the cooperation agreement signed in October 2012 in the field of oil and gas exploration, especially in the deep waters adjacent to the Egyptian-Cypriot border.

He added, “Egypt and Cyprus are sovereign states. Turkey's claim to natural resources in the eastern Mediterranean is unacceptable and criminalized under international law. It threatens international peace and security.” Tahawy confirmed Egypt’s right to defend itself against any Turkish aggression in the EEZ in accordance with Article 51 of Chapter VII of the Charter of the United Nations.

Turkey and Egypt had maintained close ties under the reign of former President Mohammed Morsi. Erdogan visited Egypt in November 2012 and several economic agreements were signed between the two countries, in addition to coordination on some common issues, especially the Palestinian cause.

However, the toppling of Morsi in July 2013 severely strained Egyptian-Turkish relations. Turkey officially rejected the ousting of Morsi, seeing his overthrow as a “coup.” On several occasions, Turkish Prime Minister Recep Tayyip Erdogan said that Morsi is the “only legitimate president of Egypt.”

Back then, this position stirred the ire of the Egyptian government. It reduced the level of its diplomatic representation in Turkey to charge d’affaires, expelled the Turkish ambassador in Egypt and summoned the Egyptian ambassador in Ankara.

Meanwhile, Egyptian-Cypriot relations further expanded since President Abdel Fattah al-Sisi took power in Egypt in 2014. Sisi visited Cyprus in 2015 as the first Egyptian president to pay an official visit to Cyprus, and then again in November 2017.

Egypt succeeded in pursuing a fruitful cooperative diplomacy to maximize its utilization of energy resources in the eastern Mediterranean. These efforts culminated in October 2016, when Egypt hosted a tripartite summit with Cyprus and Greece. The “Cairo Declaration” ensuing from the summit focused on enhancing cooperation among the three countries through a series of agreements on exploration and transportation of natural gas within their common maritime borders.

Tarek Fahmy, a professor of political science at Cairo University, described the statements of Turkey's foreign minister as hostile. “They mean nothing and do not affect the nature of the existing agreement between Egypt and Cyprus,” he told Al-Monitor.

“The timing has its implications and dimensions. The Turkish statements may be interpreted in light of the start of production by Egypt in the Zohr natural gas field in late January, which is the largest gas discovery of its kind in the eastern Mediterranean,” he said. “Egypt's maritime forces can protect Egypt's rights in the eastern Mediterranean. Turkey is well-aware of this. In 2017, Global Firepower classified Egypt as the sixth strongest navy in the world and the first military power in Africa and the Arab world.”

He explained that the Turkish position is not only linked to Egypt but also stems from major differences with Cyprus. “Both Egypt and Cyprus have to coordinate positions to repel any Turkish attempts to undermine their rights,” Fahmy added.

During his speech at the inauguration ceremony of the Zohr gas field Jan. 31, Sisi noted that the demarcation of the maritime border with Cyprus contributed significantly to the discovery of the gas field by the Italian energy company Eni in August 2015.

Egyptian Minister of Petroleum Tariq al-Mulla said at the inauguration that the natural gas production of the Zohr gas field will save Egypt gas imports equivalent to around $3 billion annually. “By the end of the year, we will have reached self-sufficiency," Mulla said.

Any attempts of rapprochement between Egypt and Turkey during the next stage could be difficult. The eastern Mediterranean seems to be a new source of dispute between the two countries, as Turkey does not seem to want to resolve its problems with Cairo.