Egypt's disputed transfer of the Tiran and Sanafir islands to Saudi Arabia may be one part of an overall peace deal involving Israel. 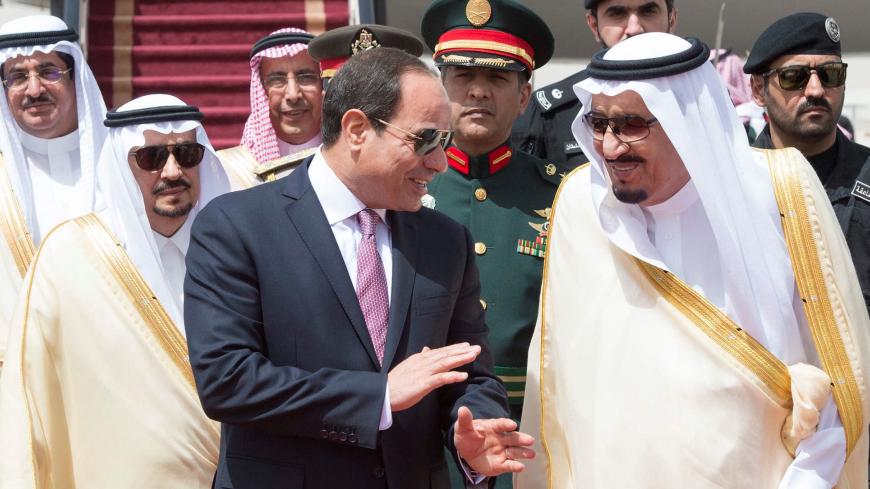 US President Donald Trump wrapped up his first foreign tour May 27. His most notable stop was Saudi Arabia, and his visit to the kingdom emphasized the similar visions of Washington and Riyadh. Many Muslim and Arab leaders were invited to Riyadh for a summit, which made it a significant visit that went beyond bilateral relations limited to two allies or countries sharing common objectives in the region.

A source from the Saudi Royal Court, speaking on condition of anonymity, told Al-Monitor that the visit and backstage talks were only part of a series of steps to remap the region and take radical measures on some issues. The source noted that Saudi Arabia is seeking to reposition itself in the region and redefine its ties, adding that the issue of Tiran and Sanafir — two Red Sea islands that Cairo ceded control of to Riyadh in April 2016 — is one issue involved in this strategy.

For more than a year, Al-Monitor has been trying to find a satisfactory answer to the reason behind Saudi Arabia's asking Egypt to cede control of Tiran and Sanafir. Through Saudi sources in the Royal Court, Al-Monitor managed to connect with influential Saudi leaders and decision-makers and extract information and explanations that made the bigger picture behind this shift in Riyadh’s stance in the region clearer. These connections also shed light on why the issue of Tiran and Sanafir came to a head in 2016, although it had been on the table for a long time.

The Saudi source said, “The request that Riyadh gain control of Tiran and Sanafir was not a purely Saudi demand. In fact, this was an Israeli request that Saudi voiced.” The source went on to explain the reasons and the link between the two islands, the Saudi changes and the Palestinian cause.

“Saudi-Israeli relations are the main gateway to understanding the issue of the Tiran and Sanafir islands, the transformations in the region and the backstage deliberations over the Palestinian cause,” the source added.

The source indicated that Saudi-Israeli security coordination precedes any diplomatic rapprochement, saying, “The Saudi army signed a memorandum of understanding to train Saudi officers with the Israelis. The first training session in which officers participated took place in 2015 at the naval base in Haifa. Through the United States, Saudi Arabia sought Israeli cooperation to manage the [Bab el-] Mandeb Strait and the Gulf of Aden to cut off Iran’s supplies to the Houthis.” The source added, “There are US and Israeli officers in King Faisal air base in Tabuk.”

According to the same source, Saudi Arabia signed a memorandum of understanding to buy and install the Iron Dome and the Hetz family of missiles through the defense manufacturing company Raytheon, which is a partner of the Israeli Rafael Advanced Defense Systems Ltd. The memorandum was signed after US President Barack Obama’s visit to Saudi Arabia in April 2016.

In addition to Saudis' fear of Iranian expansion in the region, there were indications of potential rapprochement and normalization of ties with Israel from former Saudi officials. This encouraged Israelis to ask Saudi Arabia to take control of Tiran and Sanafir from Egypt. Israeli officials voiced this demand to assistants of King Salman bin Abdul-Aziz Al Saud during the 2015 summer break he spent in the French city of Cannes.

But why is Israel suddenly interested in the two islands at this time?

The source said, “Israel wants to complete control of the water in its border regions, especially those overlooking the Sinai Peninsula, following the deterioration of the situation there, and the Gulf of Aqaba. The Dead Sea project has been revived, and through it, there will be a water canal feeding the Dead Sea in Jordan from the Red Sea waters. Israel also wants to mark its territory and assert its sovereignty in this part of the territorial waters.”

The source highlighted another aspect of the repercussions of transferring the control of the two islands and turning the region into an international waters’ zone in which Israel officially has the upper hand. A project is under study to build a railway line between Jordan, Saudi Arabia and Israel. He noted, “This line will seemingly extend from Jordan to Israel, but covertly, it will establish better economic and trade ties between Israel and Saudi Arabia. Jordan is currently examining the possibility of a free trade zone between the two countries [Israel and Jordan]. Meanwhile, Israel is seriously considering building Ben Gurion canal between the Red Sea and the Mediterranean Sea to strengthen its ties with the Gulf countries through Saudi Arabia and to marginalize the role of the Suez Canal.”

The source continued, “Israel and the United States are asking to take part in controlling the two islands under alleged concerns about the deteriorating situation in Sinai, which directly threatens Israel’s national security.” The source did not reveal the official Saudi response to this demand, but said that the Saudi intelligence apparatus does not seem to mind such a development.

The source noted that transferring control of the two islands would necessitate regional arrangements between Israel, Saudi Arabia, Egypt and Jordan regarding the Gulf of Aqaba and the division of the Red Sea water resources, to be turned into international waters. But, first, the legal procedures must be settled. The Egyptian parliament must approve the maritime demarcation plan, which according to the source, based on Egyptian-Saudi deliberations, will not take more than a year. In April, Saudi Arabia had already reintroduced the two islands on its governmental maps.

The source tackled a final point that explains Israel’s insistence on Saudi Arabia’s regaining sovereignty over Tiran and Sanafir as a requirement for its support for the kingdom and normalization of ties between them. As a matter of fact, the source said, “In 2003, Egypt installed state-of-the-art surveillance techniques to track the movement of ships and naval equipment in the two islands, under the pretext of protecting its national security. When Israel expressed its disgruntlement, Egypt reiterated its claim [of protecting its national security]. When Egypt gives up the two islands, the surveillance installations will be dismantled, as it won’t be concerned anymore.” Al-Monitor could not get a confirmation or denial of this last point from an official Egyptian source.

Another source close to diplomatic circles in Washington and having good ties with Saudi Arabia told Al-Monitor, “Trump asked Sisi for his personal suggestion about a possible reconciliation initiative between Israel and the Palestinians. In the proposal, Saudi Arabia and Egypt would draft a new agreement annexing part of the settlements to Israel, provided that Jerusalem has an independent status that Arabs and Israelis agree on. In return, Egypt would play an effective role in resolving the crisis in the Gaza Strip by cooperating with Israel.” The source noted that Israeli Prime Minister Benjamin Netanyahu sought to ensure Egypt and Saudi Arabia’s approval, as he considers them the most influential states in the Arab and Muslim world.

The Saudi source commented on the news being circulated about a summer meeting to discuss the Palestinian cause, saying that a meeting draft has indeed been presented to some Arab states. The draft includes the names of the suggested attendees to an Arab Summit on the Palestinian cause. This would show who is ready to hold a joint summit with Netanyahu, with the participation of Palestinian Authority President Mahmoud Abbas and Jordanian King Abdullah II. The source emphasized the likelihood of Jerusalem presenting the biggest hurdle and complicating matters, since Jordan might not accept giving up its guardianship of the city in the new agreement. The source added that Egyptian President Abdel Fattah al-Sisi will have to pressure Abbas “to push the peace process forward” and at the same time pressure Gaza.

Al-Monitor’s diplomatic source said that during his visit to Washington, Saudi Deputy Crown Prince and Defense Minister Mohammed bin Salman met with members of the American Israel Public Affairs Committee at a well-known hotel in Washington. They talked about peace with Israel, and Salman said that Saudi Arabia does not mind the Israeli presence in the region.

The source underlined that Israel wants the settlement of the strait problem and its repercussions and the Arab-Israeli diplomatic rapprochement to be part of the Palestinian cause resolution in the framework of restructuring Israeli-Arab ties, “especially since the relations of Saudi Arabia and Egypt with Israel are at their best.”

The source mentioned the famous Aqaba meeting held in November. During the meeting, Netanyahu clearly talked about reviving the land exchange process as a solution to the Palestinian problem. The source noted that “this is part of Israel’s plan to resolve the Palestinian cause once and for all and rearrange its relations with the countries in the region.”