A court ruling supposedly has ended Egypt’s attempt to hand over two strategic Red Sea islands to Saudi Arabia, but the government hasn’t necessarily given up. 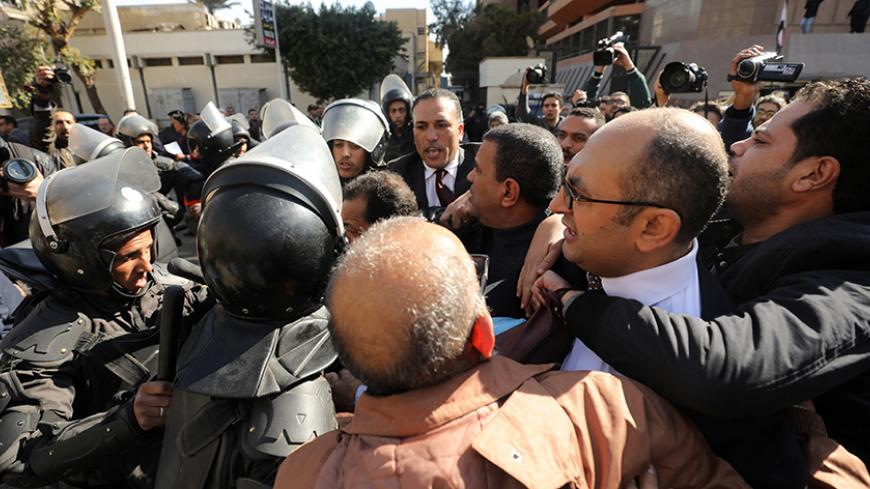 Security forces tussle with Egyptian lawyer and ex-presidential candidate Khaled Ali (C-R), who is marching in support of a ruling against the Egypt-Saudi border agreement, in front of the State Council courthouse in Cairo, Jan. 16, 2017. - REUTERS/Mohamed Abd El Ghany

The judicial decision came Jan. 16 after a fierce fight both on the streets and in the country’s courtrooms, and people are now calling for Egyptian President Abdel Fattah al-Sisi and his government to be tried for treason.

“What the government did is a criminal offense” under the penal code, Malek Adly, one of the lawyers who spearheaded the campaign against the deal, told Al-Monitor. “But it is not an easy matter politically to prosecute Sisi and the government while they are in power.”

In spite of a Higher Administrative Court ruling against it, Egypt’s government had approved the controversial deal to hand over the Red Sea islands to Saudi Arabia on Dec. 29, pending parliament ratification. The approval sparked protests and parliament opposition.

Egypt has had sovereignty over the islands for thousands of years, long before Saudi Arabia was established as a country, Taqadum Al-Khatib, a researcher at Princeton University, told Al-Monitor. This sovereignty is well-documented throughout different eras. The Old Testament mentions how the islands are part of Sinai, he said. A Napoleon-era map states the same, as well as an 1805 Ottoman map. During WWI, Egypt allocated forces on the islands to protect the Suez Canal. The 1916 Sykes-Picot Agreement, made years before Saudi Arabia became a country in 1932, also recognized the islands as Egyptian. Khatib sent everything he had dug up to the lawyers, including Adly — who said the government ignored the information and came up with its own.

“Testimonials of military officials, geologists and politicians are forged or disregarded, and those opposing the [islands’] handover are arrested,” Adly said.

Demonstrators staged a small protest against the islands deal on Jan. 3, and 12 people were arrested. A woman was detained in Alexandria for holding a banner that read “Tiran and Sanafir are Egyptian.”

“The collective consciousness of the Egyptian people regards the deal as treason,” Adly said, noting that in the past, people had died defending the land. Images of Egyptian soldiers on the island of Tiran in 1967 have been circulating on social media since the deal was brought to light.

Egyptian journalist Abdelrahman Youssef uncovered the deal during Saudi King Salman bin Abdul-Aziz Al Saud’s visit in April. The islands were to be handed over in exchange for $2 billion annually and 25% of the value of oil and gas extracted from them. Youssef’s source did not say how long the payments were to continue.

On April 15, dubbed “Land Friday,” thousands took to the streets to denounce the agreement. Authorities arrested hundreds of protesters, sentencing 152 to two to five years in prison. Others were arrested by security forces from their homes and from cafes to try to head off protests set for April 25; attempts to assemble that day were crushed by the well-prepared security forces.

Commenting on the usual trumped-up charges handed to arrested protesters, Adly asked, “How come when a few people demonstrate, they are said to pose a threat to public safety and national security and are seen as traitors, while those who give up strategic Egyptian lands are not?”

The islands lie at the mouth of the Gulf of Aqaba, where shipping lanes lead to ports in Jordan and Israel.

Since 1955, Israel has been trying to strip Egypt of control over the islands. In 1967, the United Nations refused an Israeli request to consider the Tiran Strait part of international waters. In the 1978 Camp David Accords between Egypt and Israel, which entailed the withdrawal of Israel from the entire Sinai Peninsula, an article was dedicated to the two islands, clearly stating their Egyptian nationality. Saudi Arabia was not a party to that agreement.

Now it appears Israel is renewing its attempts to acquire control over the strategic area.

In the deal Sisi had planned, Israel was to handle security responsibilities of the islands, according to former Journalists’ Syndicate head Makram Mohamed Ahmed.

Saudi Arabia was to be a mere mediator, said Khatib, the Princeton researcher. What the Saudis would gain was a bigger political alliance in the face of Iranian/Shiite expansion in the region, which is also opposed by Israel, he believes.

But Adly noted that even if that is not the case and the islands remained under the sovereignty of Saudi Arabia, Riyadh would still have a say in Israel’s national security, giving it a powerful card with Israel and the United States.

Meanwhile, Egypt would be provided with Gulf support, both political and economic, Khatib said. However, it could lose a lot. “If Egypt loses control over the Islands, it loses a regional influence,” he said.

That possibility has strategic and economic ramifications. Egypt would not be able to control traffic in the Gulf of Aqaba. The loss would also endanger the security of Sinai and the Suez Canal, Khatib added. National control over a strait allows a country to inspect ships, search them for dangerous material, recognize military ships and ban them from passing if it wishes. This reflects on securing navigation in the Suez Canal, as well as the security of Sinai’s east coast.

In addition, Israel has proposed building a rail line between Eilat on the Red Sea and Ashdod Port on the Mediterranean, which would directly affect the revenue of Egypt’s Suez Canal.

Tiran and Sanafir are also natural protectorates, part of the Ras Muhammad National Park. Its coral reefs and fish population lure tourists, providing Egypt with a source of income. The islands are 7 miles from Sinai, making the distance less than the 12-mile mark for international waters stipulated by international navigation laws.

About 3,000 opponents of the deal, including public figures and activists, signed and sent a statement to parliament rejecting the handover.

Parliament had put off discussing the matter until the High Administrative Court issued its decision, while 56 parliament members openly rejected the deal and one went on a hunger strike.

The Egyptian government set aside the previous court ruling just hours after its announcement, and talk is already circulating about what actions it might take against the one issued on Jan. 16.

“Nobody would do this except someone working against us [Egyptians],” Adly said of the government’s position, which could still push parliament to ratify the deal.

“The whole matter is a political game,” Khatib said.