Egypt’s parliament shoved through approval of a deal to transfer Tiran and Sanafir islands to Saudi Arabia, but experts say the move violates the constitution and is likely to fuel public resentment. 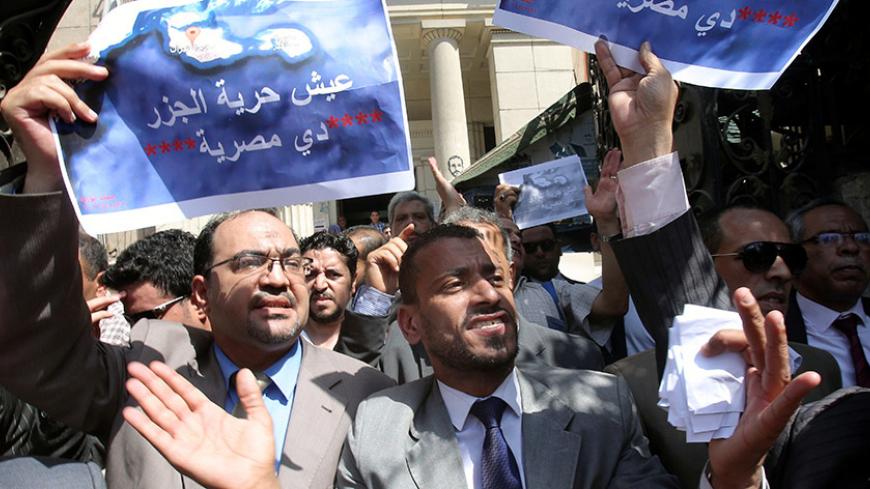 Protesters shout slogans against a deal ceding Egyptian sovereignty over two Red Sea islands to Saudi Arabia that was being debated in parliament in Cairo, June 13, 2017. Parliamentary approval of the deal was announced the next day. The banner reads "Two Red Sea Islands are Egyptian." - REUTERS/Mohamed Abd El Ghany

CAIRO — Egypt's parliament quickly gave its blessing to a controversial maritime demarcation agreement under which Egypt is to transfer sovereignty over the islands of Tiran and Sanafir to Saudi Arabia. But some parliamentarians, legal experts and citizens are saying, “Not so fast.”

One legislator resigned from parliament in protest, and a political science expert predicts that consummating the turnover would cause the political system to buckle. Police arrested eight people, including three journalists, from among dozens of people at a demonstration the night before the vote.

In April 2016, Egypt and Saudi Arabia had signed a bilateral agreement to turn over the islands. On Jan. 16, the Supreme Administrative Court nullified the agreement. But in a plenary session June 14, parliamentary speaker Ali Abdel Aal announced the transfer's approval, flouting all judicial rulings against the agreement concerning the uninhabited but strategically located Red Sea islands.

The dispute over the islands has continued all this time, yet it took parliament less than four days to "settle" the disagreement, holding five sessions of the relevant parliamentary committees. The first session was held June 11 and headed by Abdel Aal, who did not allow parliament members to take the floor to discuss the matter. He insisted on a vote by a show of hands, disregarding parliament bylaws requiring a roll call.

“The [voting] session was managed in a selective way and did not allow experts who oppose the agreement to express their opinion,” said Mohamed Fouad, the head of the Wafd Party parliamentary bloc, in the resignation letter he submitted June 15 in protest of the voting process.

Parliamentarian Haitham al-Hariri, who also opposes the agreement, told Al-Monitor, “We collected the signatures of 101 [parliament members] to quash parliament's approval of the agreement. These signatures have been recorded in the plenary session’s record. This requires a re-voting in accordance with the regulation on the vote by a roll call.”

Hariri, a member of the 25-30 bloc, asserted that the ruling of the Supreme Administrative Court and a report of the commissioners of the Supreme Constitutional Court had nullified the agreement. He said any decision by the president to hand over the two islands is tantamount to a waste of land, a violation of law and the constitution, and a transgression against the people’s property.

“Parliament has lost its legitimacy by approving the agreement in this way,” he said.

The political administration had taken, through the government, several measures before the agreement was submitted to parliament to ensure the transfer would be approved by a majority and to avoid public protests.

A number of news websites known to oppose the agreement, including al-Badil, al-Bedaiah and Misr al-Arabiya, were blocked under the state of emergency that's been in effect since April 10. Sawt El Shaab satellite channel, which broadcasted parliament plenary sessions, was also suspended.

The government also held intensive meetings with parliament members to persuade them to vote in favor of the agreement and submitted to them a report containing answers to 39 questions about the agreement — stressing that the islands belong to Saudi Arabia and denying that Egypt would bear any political consequences at the local and regional levels by approving the pact.

Critics say Egyptian President Abdel Fattah al-Sisi is pushing the proposal to curry favor and maintain his country's lucrative relationship with Saudi Arabia, which has provided billions of dollars of financial support to economically devastated Egypt.

An Egyptian government official told Al-Monitor on condition of anonymity that the islands will be handed over soon, after procedural and legal arrangements are completed in Egypt. Those include the president signing the agreement and its publication in the Official Gazette.

However, the official, who had taken part in the recent parliamentary-government meetings on the agreement, noted that talks with the Saudi side did not lead to a final agreement on a critical aspect: ending Egypt's protection of the islands after they are transferred.

“This issue is still linked to other regional arrangements, mainly the repercussions of the agreement on the Camp David Accords, which had placed the Strait of Tiran within Area C and under which Egypt undertook to protect Israel’s right of navigation through this strait. This is also linked to the mechanisms for transferring [to Saudi Arabia] the commitment to these obligations to Israel," he said.

The islands are located at the mouth of the Gulf of Aqaba. Vessels must use the gulf's shipping lanes to access Jordanian and Israeli ports.

"Also, it does not fall within the president’s prerogatives to conclude an agreement waiving a part of the state’s territory or to organize a public referendum in violation of the constitution.”

He added that the president and parliament are not entitled to cancel the Supreme Constitutional Court's decision nullifying the agreement. “From a procedural standpoint, the regime’s relinquishment of its ownership of the islands would deny Egypt any capacity over these islands, whether in terms of sovereignty or protection,” he said.

Sisi considered the matter settled more than a year ago when, in comments broadcast live on state television April 13, 2016, he said, "We did not surrender our rights, but we restored the rights of others,” and called for an end of the discussion on the issue.

Yet the recent parliamentary approval of the transfer was the straw that broke the camel’s back and mobilized public opposition against the regime and all its executive and legislative institutions.

The hasty approval awakened the opposition movement, as evidenced by the protests staged in front of the Syndicate of Journalists the night before parliament approved the agreement.

Hassan Nafaa, a political science professor at Cairo University, told Al-Monitor, “The [parliament members'] approval of the transfer is a major political mistake that will embarrass the Egyptian institutions in the coming period. Sisi’s signature on this agreement will usher in the collapse of the political system.”

He added, “The pro-regime groups in Egypt are currently groups that benefit from the regime or that hate the Muslim Brotherhood. The vast majority of the people believe the regime has forsaken a part of Egypt’s land.”

Parliament gave the government the chance to push through the agreement and muzzle opposition voices both inside and outside parliament. The regime now has to abide by its obligation and hand over the islands or risk embarrassment in front of Saudi Arabia.

In the meantime, the decision is likely to have repercussions affecting the regime’s popularity and its ability to win Egyptians' trust again.