Despite a court ruling against the transfer of the islands of Tiran and Sanafir to Saudi Arabia, the Egyptian government is working to secure parliamentary approval of the deal. 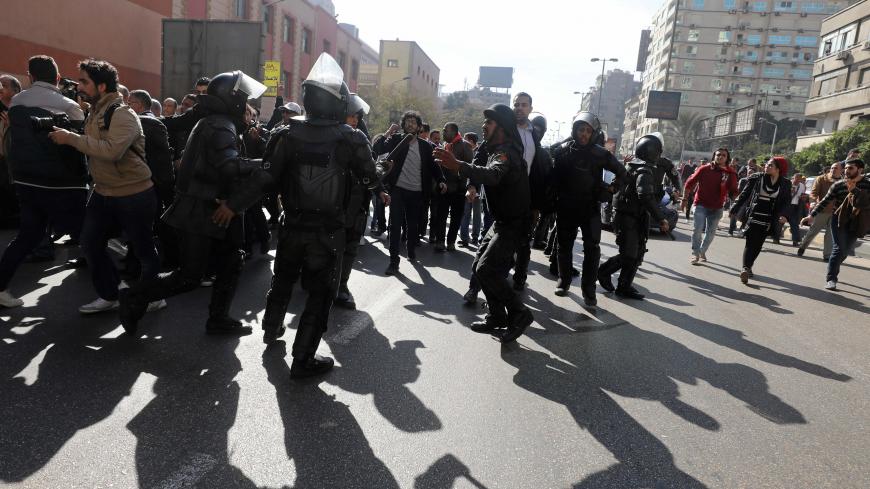 Egyptian security forces attempt to block people marching in support of a ruling against the Egypt-Saudi border demarcation agreement, in front of the State Council courthouse in Cairo, Jan. 16, 2017. - REUTERS/Mohamed Abd El Ghany

The Egyptian government is putting the final touches on the demarcation of its maritime borders with Saudi Arabia to complete the transfer of the Tiran and Sanafir islands to the kingdom.

The parliament’s legislative and constitutional committee is holding three meetings June 11-12 to discuss the agreement. In an unprecedented move in the history of parliamentary sessions, the parliamentary media committee did not send the weekly committee meeting agenda to media outlets and only sent out the schedule of general sessions. A member of parliament told Al-Monitor on condition of anonymity, “This might be the first step to making the meetings covert and unannounced to the media. The secret nature of the meetings has not been confirmed yet, but the committee head has the right to [make their proceedings secret] anytime.”

Another member of parliament who supports the agreement to transfer Tiran and Sanafir islands to Riyadh and is close to decision-making circles reinforced these concerns when he told Al-Monitor on condition of anonymity, “The Egyptian parliament wants to extend the second term of its session ending June 30, which violates the laws of the regulations organizing its work, in order to approve an agreement before the end of July.”

The statements of the parliamentary source were in line with those of an Al-Monitor source in the Saudi Royal Court. The Saudi source said, "An Egyptian presidential official visited Saudi Arabia in May and asserted that, by the end of June, encumbrances presented by the political and public opposition will be removed and legal changes will take place to cede the ownership of the two islands to the kingdom. The Egyptian regime considers the issue settled.”

The source added, “The Egyptian presidential official told the Saudi side that the [Egyptian] government has finished preparing the file with all information and documents that will be used legally and publically to approve the agreement.” The source also said Mofid Shehab, a teacher of international law and a former minister of parliamentary affairs who previously held the position of legal adviser to the Saudi Embassy in Egypt, supervised the work. The source said, “The committee will resort to experts from the General Directorate of Military Survey as well as geography experts and former diplomats to complete the formal framework before the public opinion to pass the agreement.”

The source underlined the statements of the Egyptian official about “the arrangements of Egyptian, Saudi, Israeli and international security missions regarding Tiran Island, which have become final and which will not be amended.” The source confirmed Al-Monitor’s previous statements that “the Egyptian Foreign Ministry notified the US State Department in April that the Egyptian government will firmly proceed with the approval of the agreement.”

The Egyptian government had officially signed the demarcation agreement with Saudi Arabia in May 2016 to transfer ownership of the islands to the kingdom without referring the matter to parliament. Eight months later, a copy was sent to parliament. This sparked controversy about which party has precedence to act in disputes between the Egyptian government and those opposing the transfer, namely: Should the parliament or judiciary be given precedence in such cases? The issue reached the parliament’s legislative committee after the judiciary failed to settle it. The dispute landed in the hands of the Supreme Constitutional Court to decide whether the Supreme Administrative Court, which ruled in favor of the Egyptian ownership of the two islands, has precedence.

Article 151 of the Egyptian Constitution states that “the President of the Republic represents the state in foreign relations and concludes treaties and ratifies them after the approval of the House of Representatives. They shall acquire the force of law upon promulgation in accordance with the provisions of the constitution. With regard to any treaty of peace and alliance and treaties related to the rights of sovereignty, voters must be called for a referendum, and these treaties are not to be ratified before the announcement of their [voters’] approval in the referendum. In all cases, no treaty may be concluded that is contrary to the provisions of the constitution or that leads to concession of state territories.”

A member of parliament told Al-Monitor, “The Egyptian regime … has held several unannounced meetings with members of parliament of different political affiliations and opposing parliamentary blocs to ensure the agreement of the majority. One member of parliament attending the session revealed that a representative of the security sovereign parties said during the meeting that ‘Saudi Arabia has the right to proprietorship of the two islands and Egypt was only occupying them’ and he presented documents he considered historical.”

The legislator added, “Egyptian Prime Minister Sherif Ismail will see to holding several meetings with some members of parliament from different blocs to show the agreement-related documents. Ismail asked about where it says Saudi Arabia has the right to the islands’ proprietorship in the documents that Shehab presented.”

The Egyptian government went beyond the secret meetings. The Egyptian Cabinet Information and Decision Support Center prepared a report, which Al-Monitor received a copy of, containing 39 questions and answers about the issue. The report says “the islands are Saudi Arabian, but they were under Egyptian protection that should last no longer,” adding, “Egypt occupied the islands peacefully to protect them, but this does not mean they are under its sovereignty.” The report presented “documents showing proof of Saudi’s quest to regain the two islands over the years.”

The report also sought to answer the questions of the parties opposing the transfer of the islands’ ownership, asking how Tiran and Sanafir can be Saudi Arabian when they house Egyptian governmental service centers such as a police and customs’ station. The report read, “The station was part of Egypt’s governing of the islands, but it does not mean Egypt owns them or has sovereignty over them.” The Egyptian government tried to deny the evidence that those opposing the agreement, mainly Egyptian soldiers, put forward, saying in the report, “Not one drop of Egyptian blood was shed over these islands.”

The parties that oppose ceding ownership of the islands to Saudi Arabia explained how they plan to win the parliamentary battle. A parliamentary source from the opposing bloc told Al-Monitor, “We are arranging a campaign to collect public and parliamentary signatures of those rejecting the agreement. The signatures of the members of parliament will be registered before the notary public and submitted as an official document of rejection to the speaker of parliament, thus revealing the names of those approving of the agreement to public opinion.”

Members of parliament from the so-called 25-30 bloc, a major leftist coalition, tried to transfer their membership from their current committees to the legislative committee to foil the agreement and tip the balance to the opposing side before the agreement is put to a general session vote. But the parliament speaker refused to this; opposition parliamentarians considered this to show an unacceptable bias on his part.

Meanwhile, Al-Wafd Party legislators submitted an official letter to Bahaa Abu Shoka, the president of the legislative and constitutional committee, along with international agreements, documents and related decisions and laws to confirm that the two islands are Egyptian and that the whole agreement is unconstitutional. In a media statement issued earlier this month, the 25-30 bloc demanded “closing the issue forever in case the Supreme Constitutional Court rules in favor of the precedence of the Supreme Administrative Court.”

Legislator Haitham al-Hariri, a member of the 25-30 bloc, told Al-Monitor, “We will maintain our parliamentary and public mobilization to resist this agreement.” He said Egypt owns Tiran and Sanafir and has fought for them, adding that “putting the agreement to a public referendum” — a possibility suggested by some — “and outside the parliament’s jurisdiction is catastrophic on the legal and constitutional levels, because arguing Article 151 of the constitution applies here [would lead to] an official acknowledgement that they are not under Egyptian sovereignty.”

Abdelrahman Youssef contributed to this report.