Why an Egyptian court is challenging Sisi on islands handover 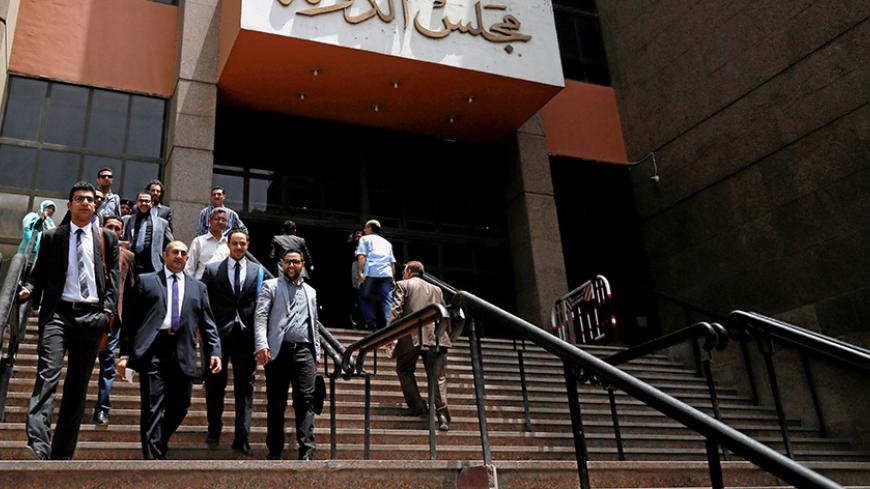 Lawyer and former presidential candidate Khaled Ali (2nd L) leaves a hearing for a lawsuit filed against the government to stop the transfer of two Red Sea islands to Saudi Arabia, at the State Court in Cairo, Egypt, May 17, 2016. - REUTERS/Amr Abdallah Dalsh

The slogan “Bread, freedom, these islands are Egyptian” left hundreds of Egyptian young people behind bars as they protested the transfer of Tiran and Sanafir islands to Saudi Arabia in April. This very slogan, however, sparked cries of joy in the State Council Court as a ruling to keep the two islands under Egyptian sovereignty was announced June 21.

In a courtroom full of despair and frustration, a judge read his ruling, “The islands should remain part of Egyptian territory and within Egyptian borders; Egyptian sovereignty over the islands holds, and it is forbidden to change their status in any form or through any procedure for the benefit of any other state.”

The ruling gave back a sense of hope and optimism to those in attendance, who chanted “Long live justice!”

The administrative court, the judicial body exclusively competent to adjudicate disputes involving the state, issued a ruling June 21 annulling the maritime border demarcation deal between Egypt and Saudi Arabia, which stipulated the transfer of Tiran and Sanafir, located at the entrance to the Gulf of Aqaba, to Saudi territorial waters.

The court’s ruling stressed “the annulment of the signature of the Egyptian government’s representative on the maritime border demarcation agreement between the Arab Republic of Egypt and Saudi Arabia, signed in April 2016, which provides for the transfer of the islands of Tiran and Sanafir to Saudi Arabia.”

The ruling continued, “Egypt imposed a naval blockade on Israel and prevented it from passing through the Strait of Tiran, and this was raised in the United Nations. Egypt’s sovereignty over the two islands holds. Also, decision No. 367 was issued by the deputy prime minister and the minister of defense for the year 1986 regarding the determination of militarily strategic areas that should not be owned, and the decision included the islands of Tiran and Sanafir.”

“According to Egypt’s Atlas, issued by the Military Survey Department of the Ministry of Defense in 2007, the islands of Tiran and Sanafir are within the limits of the Egyptian state,” the court added.

For his part, Egyptian Cabinet spokesman Hossam al-Qawish told Al-Monitor, “We will provide all the evidence proving that Tiran and Sanafir are Saudi territory, and we uphold the right to appeal the court ruling.”

The Egyptian Council of Ministers, headed by Sherif Ismail, said June 22 that the government would not comment on the court ruling and challenged the ruling, saying the court did not have jurisdiction. It said, “The administrative court’s ruling is not final, and we will provide a file containing documents and maps that will help settle the issue.”

Egypt’s Minister of Parliamentary Affairs Magdy El-Agati said people should not rush to conclude that the court's decision is the right one. He said, “The Cabinet and the Ministry of Foreign Affairs are preparing documents and maps that confirm the authenticity of the border demarcation agreement.”

Agati said the government will not refer the two islands’ dossier to the parliament until the appeal is examined, and he pointed out that when considering the issue of the demarcation of the border between Egypt and Saudi Arabia, the judge did not have the state-owned documents related to the deal.

The administrative court ruling rescinding the border demarcation agreement was received amid much fanfare. Egyptians distributed sweets in the streets amid joy at the return of the land that the government had donated to Saudi Arabia.

Meanwhile, the Council of Ministers stressed that the two islands are Saudi territory, which sparked a wave of mockery among young people on social networking websites.

Khaled Ali, who filed a lawsuit to invalidate the maritime border demarcation agreement between Egypt and Saudi Arabia, said, “The court's decision is an important step toward revealing whether the two islands are truly Egyptian, which the government tried to deny and led the Egyptian people to believe the opposite.”

He told Al-Monitor, “We believe that the court has every right to examine the case, and the government arrogantly ran away from the court and chose to provide arguments through the media.”

Bahaa Abu Shaqqa, head of the legislative and constitutional authority in the Cabinet, confirmed that the agreement on Tiran and Sanafir has yet to be submitted to parliament.

Abu Shaqqa said during a televised call-in to El Nahar TV on June 22, “Article 151 of the constitution provides that the president of the republic is the one who represents the state and concludes treaties and agreements — which are subsequently referred to the House of Representatives and which is the competent authority to examine whether or not the agreement is in conformity with the constitution. The House either gives its final say or decides to hold a referendum.”

Abu Shaqqa stressed that examining the agreement is not the prerogative of the administrative court because the conclusion of agreements is not an administrative decision.

He added, “The court must rectify the legal error and the ruling, which lacks legal and factual grounds."

But professor Mohamed Nour Farahat said, “MPs should not examine the border demarcation agreement between Egypt and Saudi Arabia now as this agreement is void.”

Farahat told the media on June 21, “MPs should not be saying that the ruling contains errors or flaws, especially considering that interference in the judicial grounds upon which the ruling was based is tantamount to an offense as per the penal code.”

He said, “The ruling is enforceable until the appeal examination department in the Supreme Administrative Court orders the halt of its execution.”

Meanwhile, Hassan Nafaa, a political science professor at Cairo University, said the decision to void the transfer of the two islands has political rather than legal consequences, since the government has the right to appeal the decision to the Supreme Administrative Court.

“The decision has had a political impact and affected the government given that it portrayed it as a Saudi agent working to transfer the islands to Saudi Arabia rather than keep them under Egyptian sovereignty,” he told Al-Monitor.

Nafaa stressed that the ruling means the demonstrators who were arrested were defending a fair national cause, saying that he thought that in ethical terms, the regime should release them.

He continued, “The ruling embarrasses the legislative power in Egypt, because as soon as the parliament supports the agreement it would be opposing the judicial authority and would consequently seem less national than this authority.”

Commenting on the Saudi silence, Nafaa said, “Saudi Arabia works behind closed doors without announcing its intentions,” stressing that the transfer of the two islands’ sovereignty to Saudi Arabia has forced it to join the Camp David peace treaty with the Israeli side.

Nafaa added, “Saudi Arabia’s signing of the Camp David treaty military annex is an attempt to further integrate Israel in the region. The two Egyptian and Saudi governments have dealt with the transfer of the islands’ sovereignty in a very bad way.”

However, Hisham Ahmad, an adviser to the Saudi Embassy in Cairo, told Al-Monitor, “The court that issued this ruling is not competent to adjudicate on such cases," saying that such agreements fall under the authority of the president.

He noted, “The Egyptian government did not inform Saudi Arabia of any official decision regarding the ruling to void the agreement.”