Why are sections disappearing from Egypt's textbooks?

Lawyers used textbooks in a case against the Egyptian government; now the books have changed. 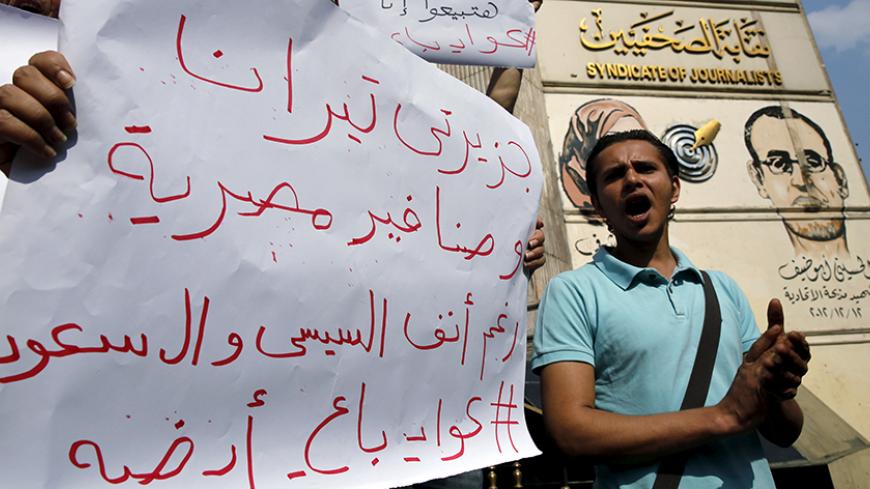 In what looks like a move straight out of George Orwell's recently resurgent novel “1984,” Egyptian authorities appear to be rewriting history to suit their political agenda.

Documentation of Egypt's sovereignty over two controversial Red Sea islands has been disappearing from history books in the school system.

Egypt has been trying for months to cede control of Tiran and Sanafir islands to Saudi Arabia. The islands are uninhabited. They are located at the mouth of Aqaba Gulf, whose shipping lanes provide access to ports in Jordan and Israel. Israel has long sought control of the islands.

The government's proposal is opposed by some members of parliament and Egyptian citizens. The entire controversy started April 8 when Saudi and Egyptian officials announced they had signed a maritime border demarcation agreement transferring ownership of the islands. Several lawyers filed suit April 11 against the Egyptian government, demanding the agreement be annulled. Hundreds of demonstrators took to the streets of central Cairo on April 15 to protest the plan, which was indeed annulled June 21. The government appealed the ruling in November, but it was upheld Jan. 16 by the Supreme Administrative Court.

So how did the controversy make its way from the court system into the school system?

Tariq al-Awadi, a lawyer in the Tiran and Sanafir lawsuit, told Al-Monitor his side had used the school system's curriculum as evidence against the government's case. “We said during our proceedings that the proof that the two islands were Egyptian is that they are included in our educational system as Egyptian islands,” he said. Or at least they were.

With the Sept. 23 start of the first semester of the current academic year, many newspapers and news websites published photographs of the new school atlas, and the islands were not included in the list of Egyptian islands as they had been before.

When the second semester began this month, Masrawy news website revealed that the Ministry of Education and Technical Education had deleted a chapter from the sixth-grade geography and history curriculum. The chapter had introduced the islands of Tiran and Sanafir, which it deemed Egyptian. It also had included related maps.

Samir Cherkaoui, the ministry's history and geography adviser, told the media the chapter was deleted to avoid redundancy and to make the curriculum easier for students, given that the same information was already included in the 10th-grade curriculum. He said all duplicate chapters were deleted.

However, Al-Monitor reviewed the 10th-grade geography curriculum, which was published on the ministry's website, and found no mention of the islands. This suggests there are other reasons why the sixth-grade material was removed.

"The Ministry of Education and Technical Education’s step [to remove the references] is the result of the embarrassment that this curriculum caused to the regime when we used them as documents before the court to prove that the islands are Egyptian," Awadi said.

Such efforts by Awadi and others were not low key. On June 3, parliament member Haitham al-Hariri posted on his Facebook page a picture from one of the textbooks of the old 10th-grade curriculum, which stated that the Ras Mohammed area, south of the Sinai, and the islands of Tiran and Sanafir are Egyptian natural reserves. Also, according to human rights lawyer and former presidential candidate Khaled Ali, lawyers had launched a popular campaign to motivate Egyptians to use all the documents and textbooks they owned to prove that the islands are Egyptian.

The curriculum changes shouldn't come as much of a surprise, Kamal Mughith, a researcher at the National Center for Educational Research, told Al-Monitor. “It is normal for the Egyptian curriculum, which leaves no room for [independent] research, to reflect what the political [regime] wants to teach the students. The state pays a lot of money to develop and print those curricula so that they are available to the largest possible number of students, so it might as well avoid teaching the views of its opponents.”

A social studies supervisor at the Education Ministry told Al-Monitor on condition of anonymity that “moving the curriculum from a dictation approach to a research approach would protect students from intransigence and allow them to discuss with their teachers whether the islands belong to Egypt or Saudi Arabia, especially considering that the students are increasingly using the internet. This allows them to develop their own views away from the ministry’s dictations.”

Although deleting Tiran and Sanafir from the list of Egyptian islands in the curriculum hasn't affected the annulment ruling, this step probably indicates that the state still intends to pursue the agreement.