Egypt's Ministry of Education is omitting the January 25 and June 30 revolutions from school history textbooks after a question in the official exams stirred controversy. 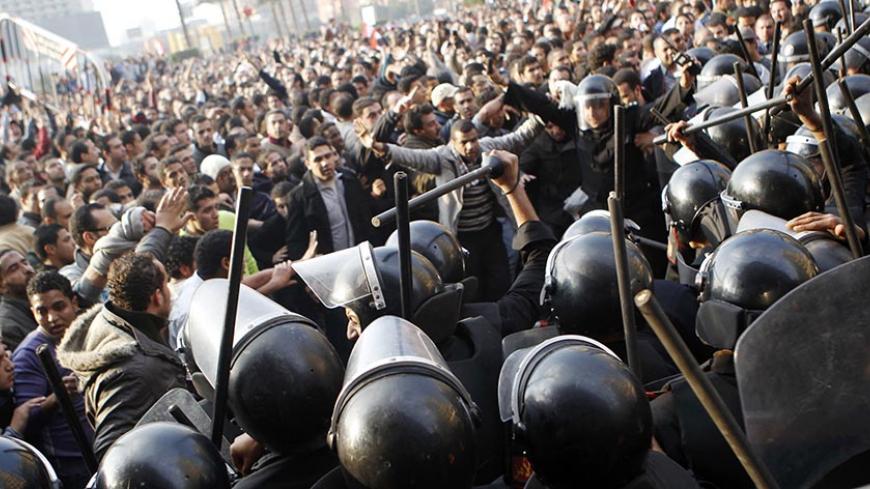 CAIRO — Egypt’s Ministry of Education announced June 17 that the revolutions of Jan. 25, 2011, and June 30, 2013, will not be mentioned in high school history textbooks for the academic year 2017-18. This has stirred a widespread controversy among parliamentarians and educational experts, and between opponents and supporters of the revolutions.

The ministry had included in the history curriculum the events of the January 25 Revolution in 2012 and the uprisings of June 30 in 2014.

The ministry’s announcement came following a controversy among students and parents about a question related to the June 30 mass protests in the history exam for Egypt’s high school students on June 11.

Students sitting for the exam were asked to write a paper on the following scenario: “How would things be if [Abdel Fattah] al-Sisi had never given the June 30 speech?”

Many students and parents saw this as a political question, while Mamdouh Qadri, the history adviser for the Ministry of Education, said in a press statement on the day of the exam that the answer to the question is clearly defined in the curriculum, and that students were only asked to stick to the textbook without giving any political reasoning or personal analysis.

The ministry’s announcement also stirred uproar among Egyptian members of parliament. On June 23, Magda Nasr, a member of the Committee on Education and Scientific Research, indicated in press statements that she will submit to Egypt’s parliament speaker a briefing request, asking the minister of education to renounce its decision.

Shorouk news quoted Nasr as saying, “It is not right to ignore these important events. Future generations at different educational stages must learn about these two events. They should obtain relevant information in a proper way and not from social media. Some people provide false information when they say that the June 30 event is a coup and not a revolution.”

Mona Abdel Ati, a member of the parliamentary Education and Scientific Research Committee, told Al-Monitor, “History should be conveyed in the textbooks as is, including positive and negative periods. Some suggested removing the era of the Muslim Brotherhood and deposed President Mohammed Morsi from the curriculum, but I object since the history curricula must include all the events witnessed by Egypt.”

Fayez Barakat, another member of the same committee, opposed the removal of these two major events. He told Al-Monitor, “These two revolutions are part of Egypt's history. They have changed the form of government and led to new constitutions. They shaped our current political and social life and should not be removed from the curriculum. It is wrong to say that these events are not part of Egypt’s history just because high school students — of 17 and 18 years of age — have witnessed them. High school students were around the age of 14 when the June 30 Revolution sparked and 12 when the January 25 Revolution erupted. At such a young age it is difficult for children to understand the political details of the two revolutions.”

Despite the almost unanimous opposition among the members of the Education and Scientific Research Committee of the removal of the 2011 and 2013 events from the history textbooks this academic year, some members of parliament from outside the committee have different views.

Tadros Qaldas, a member of the parliamentary Communications Committee, told Al-Monitor, “It would be better to wait for a long period of time before including events in the history textbooks in order to make sure these events are conveyed in an unbiased and fair manner. I would say 10 years would be a good period. This would allow things to clear up. History should not be interpreted and written at the whims of people.”

Kamal Mugheeth, an educational expert and researcher at the National Center for Educational Research in Cairo, told Al-Monitor, “History books aim to educate all students about national events. No one can deny the major impact of these two revolutions on our country. This is why it is only natural to include them in history textbooks. Historical events and figures will always be a subject of disagreement. History textbooks must only include verified historical information and contexts about the two recent revolutions, leaving it to students to make their own judgments regarding their reasons and consequences and to form their own opinion.”

Hassan Shehata, a professor of curriculum and instruction in the faculty of education at Ain Shams University, has a different opinion. “It is wrong to teach students about their contemporary lives and the events they have witnessed themselves,” he told Al-Monitor.

Shehata added, “This would deprive students of the ability to interpret events and undermine their observation, interpretation and critiquing capacities, which is contrary to all modern teaching and education methods that encourage students to form their own opinions and take relevant decisions.”