The Egyptian Ministry of Education has decided to remove some Islamic texts that it says incite violence and extremism from school curricula in a move Salafists decry as an attempt to distort history. 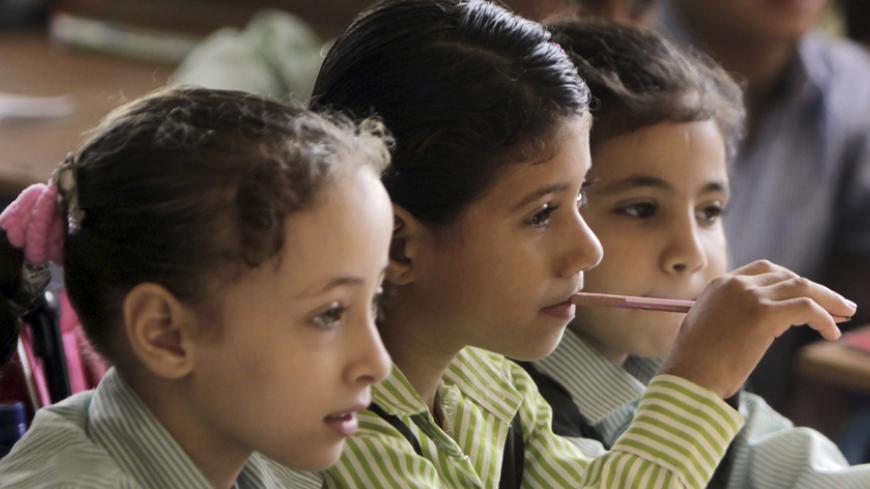 Students attend a class on the first day of their new school year at a government school in Giza, south of Cairo, Sept. 22, 2013. - REUTERS/Mohamed Abd El Ghany

CAIRO — The decision of Egypt’s Ministry of Education to remove some content from primary and secondary school curricula has sparked wide controversy in the country.

While the state views the decision — which will omit some religious texts and passages on historical Islamic figures — as a way to counter radical ideologies and fight extremism, the Salafist movements have deemed it a war on Islam.

Egypt’s Prime Minister Ibrahim Mehleb announced the decision in a press statement following a meeting he headed with the Curriculum Development Committee on April 11. He said, “We will not allow any academic textbooks that would instill myths and superstition in the minds of students.”

The Curriculum Development Committee was formed March 4 to review curricula and remove any outdated texts that incite violence.

On March 18, Egypt’s Minister of Education Moheb al-Rafei issued a decision to remove some courses in accordance with the recommendations of the Curriculum Development Committee following the review of Arabic textbooks from the first grade to the third secondary grade. The move called for revising and amending topics that could incite violence or extremism or refer to political or religious inclinations or any other concepts that could be dangerously exploited.

Lessons on Saladin and chapters of the story of Gen. Uqba Ibn Nafi were among the first to be removed from Arabic-language classes, for addressing historical Islamic figures, causing much controversy. Some Quranic and religious provisions were also removed from the Islamic curriculum.

This decision was not limited to general educational material, extending to include Al-Azhar's curricula, which primarily focuses on jurisprudence and Sharia. Many courses have been omitted, including a fatwa on “eating prisoners’ flesh,” as well as parts of the hadith that could be misinterpreted such as the Prophet Muhammad’s saying, “I was ordered to fight people until they testify that there is no god but Allah.” The ministerial decision also called for new educational material on terrorism, atheism and coups d’etat.

The Salafist Dawa Party (Salafist Call) and Nour Party rejected and condemned the ministry’s decision to remove the stories of Uqba Ibn Nafi and Saladin. Nour leader Younis Makhioun said in a March 21 statement, “Omitting these two stories is an assault on our history, an alteration of our identity and a surrender to our enemies.”

The uproar has reignited the conflict between Salafists and the government, which had previously decided in October to add a secondary school course describing the Nour and other religious parties as unconstitutional.

In a March 30 statement, Yasser al-Borhamy, the deputy head of the Salafist Call, called upon President Abdel Fattah al-Sisi and Egypt’s prime minister to intervene to restore what had been omitted, especially Saladin’s story. He said, “The ministry does not have the right to alter the nation’s history and the biography of the prophet just because it has illusions about them and under the pretext that these stories incite violence and killing. How do they have the audacity to delete the words of the Quran?”

Nivine Shehata, the spokesperson for the Ministry of Education, told Al-Monitor, “The decision to remove some of the schools’ courses was not the ministry’s sole decision, but was made based on the directives of a governmental committee that included representatives of Al-Azhar to review the schools’ textbooks.” She added, “The main goal was to shift the educational curriculum's focus on the values of tolerance in Islam and Christianity, calling for love and rejecting violence and extremism.”

In response to the Salafists' concern for the topics of Saladin and Uqba Ibn Nafi, Shehata said, “The decision did not provide for omitting the entire stories, only the parts inciting or glorifying hatred and violence and upholding radical ideologies and extremism.” She added, “Under former President Mohammed Morsi, a number of courses were added to the curriculum reflecting the Muslim Brotherhood’s ideas and values, which necessitated a comprehensive review and amendment of all the educational curricula.”

The Ministry of Education is not only set to remove all textbooks inciting violence and extremism, but “will also review the different curricula through inspection campaigns in private schools that were run by the Muslim Brotherhood so as to follow up on teachers’ performance and on the courses that are being taught to make sure that politics are separated from the educational process,” Shehata added.

On the other hand, some educators believe that the decision to remove parts of textbooks was not made on a scientific basis, but rather to satisfy the general political mood, especially considering that the state is the main supervisor of the educational process. They argue that the government could have focused on a comprehensive amendment and reform of the curricula to reflect a serious educational and scientific message.

“The process of removing some courses necessitated a set of well-defined standards and principles instead of randomly omitting certain phrases or educational subjects,” professor Kamal Mughith told Al-Monitor. He added, “Educational curricula should not be lightly dealt with this way, by omitting a few sentences without focusing on the overall content and meaning.”

Mughith said, “The state ought to develop curricula focusing on the concepts of nationalism that are not in conflict with globalization and the concepts of peace and human rights. I believe the state has dealt incautiously with this matter in the framework of the fierce war Egypt is waging on terrorism.”

He said developing the education system and curriculum ought to be the task of a national council for education in Egypt: “Such a council would have well-defined standards and not change with the political regime so as to set forth unbiased curricula that are not affected by any political ideas or inclinations.”

The Egyptian state is still working on multiple fronts to track down anything that could promote radical and terrorist ideas, including any expression that remotely hints of violence in the school curricula. However, the challenge remains significant in light of Egypt’s poor education system in general and the wide variation in the religious discourse.