Throughout the ever-changing dynamic of regimes in power in modern Egypt, the nation’s school curriculum has always been the most ideologically affected. 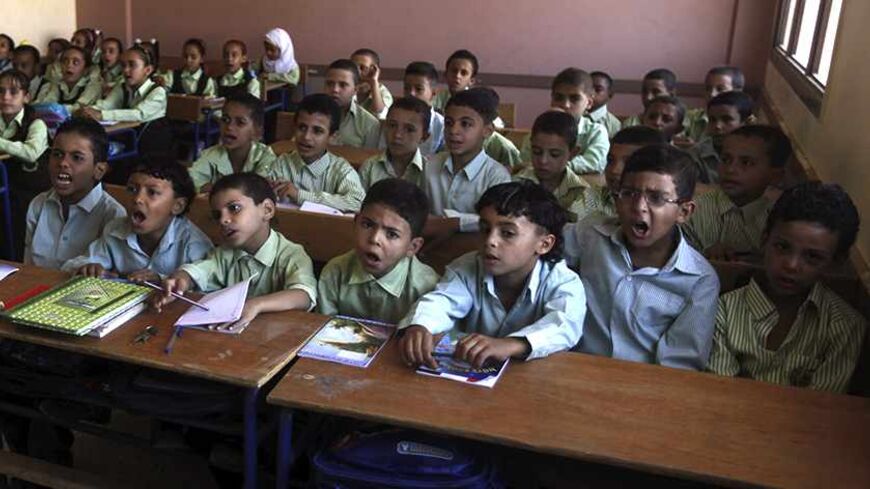 Confusion reigned over the educational process in Egypt following the spread of the country’s political crises to education curriculums, which were amended, with material added or removed as the prevailing political changes dictated. In this regard, the Egyptian Ministry of Education announced that curriculums had been completely purged of the amendments imposed by the Muslim Brotherhood when it took power.

At the same time that the Ministry of Education announced the rescindment of amendments forced by the Brotherhood on the curriculums, it also implemented changes to the curriculums at the beginning of the school year, when it removed a course titled "The Difference Between a Revolution and a Coup" from the curriculum of high school seniors. It further put a stop to the printing of their psychology and sociology textbook, which contained references to this long-taught distinction between revolutions and coups, and included long-winded phrases and sentences that spoke of the differences between popular revolutions and military coups. Amendments to school curriculums also involved reprinting the high school-level National Education textbook, when it was found to include pictures of Muslim Brotherhood figures such as Saad el-Katatni and Osama Yassin, as well as pictures of Ayman Nour. Another subject dropped from the curriculum was the one pertaining to the opinions on legitimacy, intended to be included in the National Education textbook.

Minister of Education Mahmoud Abou el-Nasr confirmed that the psychology and National Education textbooks of high school seniors contained grave errors and were not suitable for use in schools. The National Education textbook was discarded and reprinted because it covered the subject of backing legitimacy. The minister also described the psychology textbook as a joke, affirming that its back cover showed the yellow four-fingered sign typically raised by Brotherhood members.

In this regard, education expert Kamal Moughit told Al-Monitor, "It is within the Ministry of Education’s authority to delete some phrases that it deemed inappropriate and which served to glorify the Brotherhood simply because it attained power." He pointed out that there were flagrant additions to the humanities curriculum, such as an allusion to the concept of "dhimmis" [under Sharia, dhimmi, or protected status, was originally afforded to Jews, Christians and Sabians] to describe the Copts, despite that this concept was stricken from Egyptian curriculum in 1856. Furthermore, Muslim Brotherhood symbols were mentioned in the textbooks, to the point where the "Rabia" (four-fingered) salute was printed on one of them. These additions came about as a result of the 1 million yearly textbooks that were printed, at a cost of 2 billion Egyptian pounds (about $287.8 million), in dozens of private presses and publishing houses, one of which was owned by the Brotherhood, necessitating that the ministry reprint them all, according to Moughit.

Concerning the problem of the connection between school curriculums and politics in Egypt, Moughit said, "Yes, there always has been intervention by Egyptian ruling regimes to politicize material covered in school and promote their ideals. As a result of the educational system’s state sponsorship, which began at its inception during the reign of Mohammad Ali Basha. Despite the changes in educational systems and the prevalence of private education, the Ministry of Education continues to be the sole decider when it comes to the educational curriculum of private schools and is the body responsible for ultimately granting diplomas associated with this curriculum."

Moughit expounded to say that a look at Egyptian educational curriculums revealed that they, from 1917 until 1936, during the reign of King Ahmad Fuad, continued to extol the virtues of Khedive Tawfiq, who served colonial powers. In fact, school curriculums continued, even after the July revolution of 1952, to reflect the political ideals of the ruling regimes. They were also used to attack the era that preceded the July revolution and draw parallels between leaders such as Saad Zaghloul and others like Mustafa Nahhas and colonial puppets. Late Egyptian President Mohammad Naguib all but disappeared from history books, which erroneously stated that Gamal Abdel Nasser was the first president after the July revolution. These curriculums, during Sadat’s reign, also did away with the legitimacy of the revolution, which was replaced with that of the October War victory. Mubarak’s era further reduced the October War into the single event of the "air battle" [of Mansoura]. The same approach continues to this day, as schools are transformed into mere institutions tasked with ideological mobilization for the benefit of the ruling regimes.

To preclude the fighting of political battles through educational curriculums, Moughit asked the Constitutional Committee to include articles barring such intervention. According to him, the text that he proposed stated: "Educational institutions are national institutions whose aim is to strengthen national cohesion and the sense of national belonging. It's therefore prohibited to use them for ethnic, political or religious propaganda purposes."

Egyptian curriculum changes every time a new regime ascends to rule the country. As a result, it has become necessary to adopt an impartial mechanism and overall stance leading to a unified ideology in the implementation of curriculum for the study of humanities. Meanwhile, one must take into account scientific curriculums, such as biology and physics, which no longer are in tune with the age and do not reflect the scientific developments that have and continue to occur throughout the world.