A recent report claims Turkey’s education system has become increasingly Islamist, with curriculum focusing on Islamic concepts at the expense of science and secularism. Yet it remains to be seen how effective this push will be. 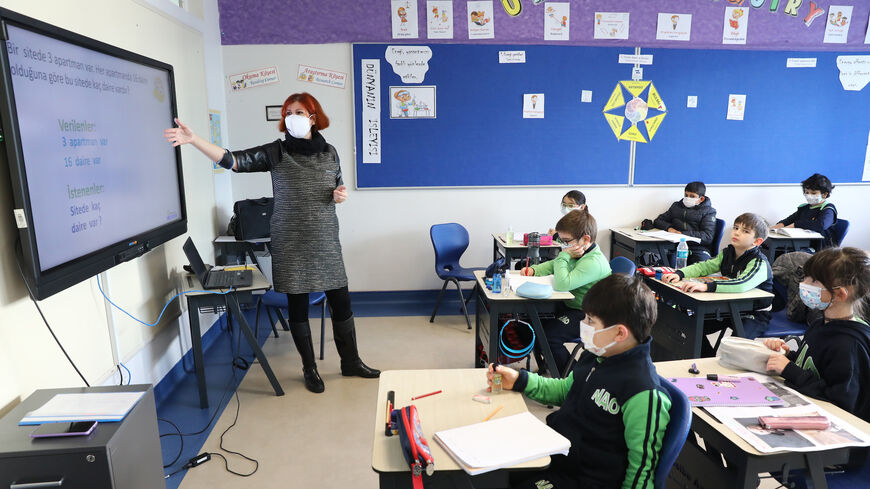 Pupils wearing protective facemasks listen to a teacher in a classroom of a school in Ankara on March 2, 2021, after the country lifted restrictions measures against the Covid-19 pandemic in regions with lower infection rates. - ADEM ALTAN/AFP via Getty Images

Turkish exceptionalism in the Middle East when it comes to secular education is over. Although Turkish textbooks had problems in the past of omitting embarrassing moments in history, never before have K-12 public school students been taught to feel obliged to see jihad as a responsibility of every good Muslim.

In March, the research institute IMPACT-se published a study of 28 new Turkish textbooks that revealed anti-Americanism, anti-Semitism, Turkish ultra-nationalism as well as sympathy for causes of jihadist movements are now routinely encouraged. Non-Muslims are regularly referred to as "infidels” in textbooks. And the concept of jihad is seen as a key term, researchers found, that has been set at the foundation of the new curriculum. IMPACT-se, based in Jerusalem, describes itself as “a research, policy and advocacy organization that monitors and analyses education across the world.”

Turkish President Recep Tayyip Erdogan’s legacy on the education system has been profound. His oft-repeated goal to raise “pious generations” is coupled with his praise of imam hatip high schools (IHL). IHLs were originally designed to train government appointed clergy, but since the Justice and Development Party (AKP) came to power in 2003, their numbers have surpassed 5,000. Gradually middle schools were converted to imam schools and tens of thousands of students were left with no choice but to attend these schools.

IHL curriculum has spread to regular high schools as well. Hundreds of thousands of Turkish students are now compelled to take “elective” classes from IHL curriculum, such as courses titled “the Holy Quran” or “the life of Prophet Mohammed.” In practice these classes are “mandatory electives” as there are no other options. If and when families try to keep their children out of these classes, their children risk the possibility of being ostracized even in the affluent Istanbul neighborhoods.

Zehra Kulali, the chairperson for the Bolu district of Egitim-Sen, an independent NGO that brings together K-12 teachers, told Al-Monitor that even kids in pre-school are not immune to Islamic education. “The education ministry concluded an agreement with the provincial office of the mufti (Islamic clergy) and clergy gained access to the pre-school classroom,” Kulali said. Children aged 3 to 6 are now receiving 6 hours per week of moral values education. Kulali and other experts are concerned about increasing politicization of education, which reflects itself in gender-segregated classrooms and Quran classes for 4 year olds.

Teaching Sunni Islamic values poses concerns even for pious Muslims. For example, students are taught about polygamy as an Islamic practice and the ability of men to receive swift verbal divorce. These Islamist values are reinforced by a new style of Turkish sitcoms, where polygamy is regularly portrayed. A female Islamist sociology professor, who works for a state university and asked to remain anonymous, told Al-Monitor, “My generation fought shoulder-to-shoulder with men for headscarf rights. But polygamy is a redline for the majority of women in Turkey at my age — whether pious or secular.” Yet for the younger generation “this is changing,” she said, since “they see polygamy is a well-established norm at school, on TV, even in real life.”

“In secular education, we could question authority but now students are asked to be subservient, especially girls. As a mother and a grandmother, I am worried,” she added.

Women are frequently portrayed in headcover in textbooks and books the education ministry recommends for young children. IMPACT-se’s report quotes a passage from the 2014 Basic Religious Knowledge textbook as the first in advocating hijab.

“Veiling, which started with Prophet Adam and Eve, is a reminder to all the nations by the prophets, as an order of Allah. Likewise, the last Prophet Muhammad (pbuh) also put forward a set of principles in this regard.”

And some say the impact of the curriculum changes can already be seen outside schools. Ebru, a businesswoman with two daughters in primary school, told Al-Monitor, “I can afford a private school so my daughters are growing up shielded from most of the Islamist rhetoric. However, they are not immune. In the grocery store the other day a teenager said: ‘Your girls are of marriage age, they should not dress like kids.’ They are 10 and 12, they are children. It is traumatic just to go out to the store.”

Another sign of discontent is the skyrocketing rise in the number of private schools. Some parents are so worried about the curriculum changes and the quality of teachers in state schools that, despite growing economic difficulties, they opt for private schooling.

The AKP has allowed the expansion of influence of religious groups in education. The Gulen movement was heavily involved in education until the 2016 coup attempt. The vacuum created by their purge was filled with other religious orders.

New foundations established by Erdogan’s close associates, such as TURGEV, Muradiye, and Ensar Endowments, also play an important role in Turkey’s education system. These foundations are legally allowed to raise funds on their own for educational activities, but also are given access to preferential and generous government funding.

Darwin’s theory of evolution was deemed too complex for high school students and taken out of the curriculum in 2017. Secular and scientific education has been replaced with heavily Islamic curriculum. It was in 2012 when Quranic verses entered the textbooks. A few years later, all new schools were required to build a prayer hall and a dedicated bathroom to wash before prayer.

There are several eye-opening statements added in the new Turkish curriculum. For example, the Israeli-Palestinian conflict is described as religious war against Muslims. IMPACT-se’s report reveals that there is a strong effort to delegitimize Zionism, with books referring to the “Zionism problem” as a plan to bring bloodshed to the Middle East. “Jihad war has been introduced into textbooks and turned into the ‘new normal’ with martyrdom in battle glorified,” the report notes. In several instances verses from Quran are used to support the idea of jihad.

In the 2019 edition of the Religious Culture and Moral Knowledge textbook, a chapter titled “some concepts in the Quran” introduces jihad as “an effort for the sake of something… The armed struggle against enemies to protect the homeland is one of the most commonly known meanings of jihad...In this regard it [jihad] is the struggle of the human being against evil and Satan.”

The report also notes the “ambiguous” nature of some texts on extremist groups like Al-Qaeda and the Islamic State. For example, the Contemporary World and Turkish History textbook describes Al-Qaeda as a terrorist group, yet at the same time says the “practices of the US constituted one of the reasons” behind Al-Qaeda’s attack on September 11, 2001.

The AKP has also introduced “recent history” into the curriculum.

For the first time, anti-Americanism has also entered Turkish textbooks. America is blamed for the weak Turkish economy, the devaluation of the lira, and the military coups.

Books already portray the 2013 Gezi Park protests as a rebellion organized against the government’s democratization and economic policies, the IMPACT-Se report finds. The Contemporary World and Turkish History textbook states: “Even though the cooperation of various capital groups and foreign intelligence forces had an effect on the Gezi Park actions [protests], most of the activists, unaware of these effects, participated in the actions [protests] in line with their own wishes.”

However the extent of the impact of these curriculum changes remains to be seen. Studies indicate that deism — the belief in god but without religion — is on the rise in Turkey. And in 2018, Turkey ranked below the OECD average in math and reading scores in PISA testing, and the average level of student’s life satisfaction in Turkey was one of the lowest among PISA-participating countries. At the same time, however, students’ interest in learning about other cultures ranked among the highest. Thus students rather unhappy with the xenophobic education system are still eager to learn about other cultures. This intellectual curiosity might be a slim hope for education in the post-Erdogan era.