A major study of Israeli and Palestinian schoolbooks found that Palestinian children are not incited to hate, contrary to popular belief, reports Dalia Hatuqa. 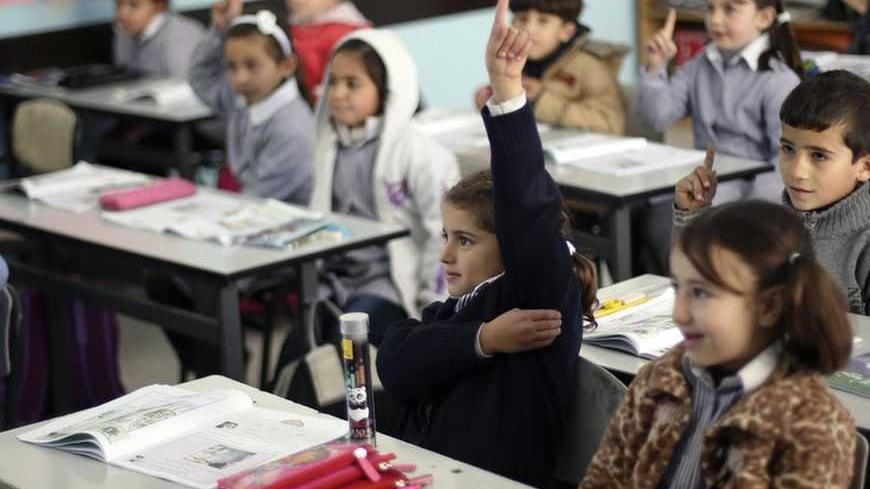 Palestinian first-graders during class in the West Bank city of Ramallah on February 4, 2013. - REUTERS/Mohamad Torokman

For years, the Israeli government, backed by “watchdogs” — such as Palwatch, IMPACT-SE (Institute for Monitoring Peace and Cultural Tolerance in School Education) and MEMRI (Middle East Media Research Institute) — has accused Palestinians of inciting hatred against Israelis through the content in schoolbooks. This allegation has been perpetuated for so long that it has almost become conventional wisdom that Palestinian children are being taught to hate and instigate violence against Israelis.

Last week, however, "Victims of Our Own Narratives? Portrayal of the 'Other' in Israeli and Palestinian School Books" — the largest report to examine textbooks on either side of the Green Line — formally debunked some of these myths, noting that there is scant evidence of “dehumanizing” and “demonizing” in Palestinian and Israeli textbooks despite the presence of examples of omissions of each other’s points of view and flaws in mapping.

Three years in the making at a cost of $500,000, the U.S. State Department–funded report explores textbooks issued by the Israeli government, the Palestinian Authority (PA), and religious bodies. The research, overseen by Sami Adwan from Bethlehem University and Daniel Bar-Tal from Tel Aviv University and designed by Yale psychiatry professor Bruce Wexler, examined 94 Palestinian and 74 Israeli schoolbooks published between 2009 and 2011.

The study was carried out under the auspices of the Council of Religious Institutions of the Holy Land, a Jerusalem-based body representing Christian, Jewish and Islamic leaders. A team of Palestinians and Israelis trained by Adwan and Bar-Tal conducted the research, which involved going through books used in West Bank and Gaza Strip schools run by the PA, UNRWA (United Nations Relief and Works Agency) and religious bodies. On the Israeli side, the research examined books used in secular and religious schools run by the state and others catering to the needs of ultra-Orthodox students.

The books were analyzed for historical referencing, mapping, narrative of the "other" and religion and other areas, aiming for comprehensiveness, accuracy and impartiality. The data was sent to Yale for independent analysis.

Despite the report's evenhandedness, it was boycotted by Israel’s Ministry of Education, which slammed it as “biased, unprofessional, and significantly lacking in objectivity.” The ministry issued a statement that said, in part, “The clear impression formed is that it is a ‘study’ with findings that were predetermined even before it was carried out professionally, and it certainly does not reliably reflect reality.”

Speaking at the Jerusalem press conference where the study was released, Professor Wexler described the ministry's statement as “false at every level," adding, "The Israeli government would rather hold on to a propaganda claim [it] know[s] to be false than to get change in Palestinian books.”

The report rebutted claims that Palestinian schoolbooks used highly negative depictions, noting that these were extremely rare. For example, the researchers flatly denied allegations that Palestinian books contained “calls to go murder Jews” or “praise of those who murder Jews.” In fact, the study only found six examples in the textbooks “that were rated as portraying the other in extreme negative ways other than as the enemy, and none of these six were general dehumanizing characterizations of personal traits of Jews or Israelis.” Twenty extremely negative depictions were found in the Israeli state books and 7 in the ultra-Orthodox books.

Israel has repeatedly slammed the PA for books that “do not designate Israel or include the Green Line. Even on maps that do show the Green Line, Israel’s name is deleted,” the Israeli Ministry for Strategic Affairs contended last December, according to an Al-Monitor report by Akiva Eldar. Even so, the report shows that “Israeli textbooks also ignore the Green Line, the line that separates the sovereign Israel from the West Bank and East Jerusalem,” wrote Eldar.

Palestinian Prime Minister Salam Fayyad, in a statement released by his office, said the study “confirms that Palestinian textbooks do not contain any form of blatant incitement, which is based on contempt towards the ‘other’. . . prov[ing] what we have repeatedly affirmed in response to allegations that have now been invalidated.”

The research concluded that both sides' books were “guilty” of using a selective narrative that undermined the story of the other, which the researchers said is not unusual in conflict areas. Speaking to the Washington Post, Professor Adwan explained that the Palestinian textbooks reflected the conditions of people living under Israeli occupation.

Wexler stated that the presence of incitement in Palestinian textbooks was likely attributable to a small number of books, no longer in use, that had been issued by Jordan and Egypt long before the PA existed. The PA was established in 1994, and it took at least six years before it began rewriting schoolbooks.

The report recommended that the Israeli and Palestinian Ministries of Education review their respective textbooks. The Palestinian Ministry of Education, unlike its Israeli counterpart, did not object to the study’s conclusions and provided assistance and access to the researchers. Fayyad said the report would be used as a guide for developing school curriculums in the future.