How the Green Line became a red line in Israeli education

Significant number of voters in the 2019 elections were taught in school that the State of Israel extends from the Mediterranean to the Jordan River and that anyone challenging this view is denying the truth. 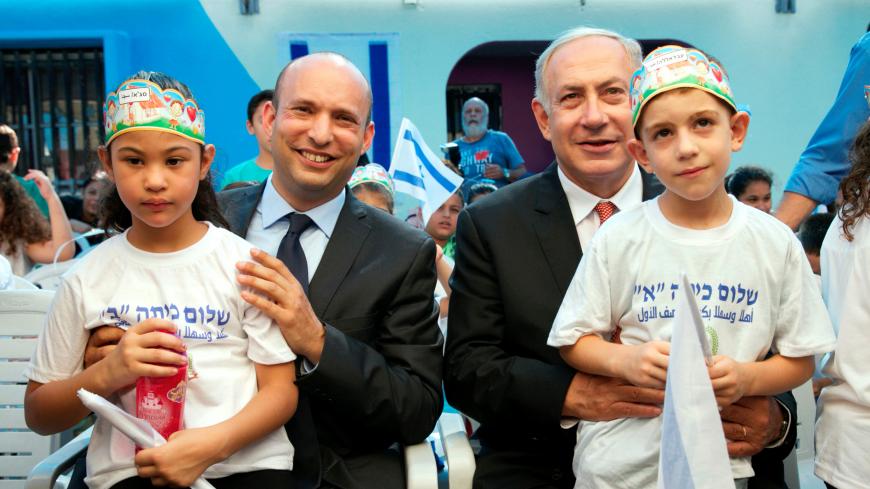 Israeli Prime Minister Benjamin Netanyahu (R) and Education Minister Naftali Bennett with pupils during a visit at the "Tamra HaEmek" elementary school on the first day of the school year, in the Arab Israeli town of Tamra, Israel, Sept. 1, 2016. - REUTERS/Baz Ratner

The scene is a fourth-grade geography lesson in the coastal town of Herzliya. The teacher, Yael (a pseudonym), shows the children a bas-relief map depicting the Land of Israel as stretching from the Mediterranean Sea to the Jordan River. “This is the State of Israel, this is our state,” she tells the pupils. One of the students, Galia Bar-Tal, seeks to set the teacher straight. “That’s wrong,” she says. “The demarcation of the Green Line is missing from the map.”

Seven years have passed since this incident, yet Bar-Tal, a smart girl with a political conscious, still remembers how the teacher reprimanded her in front of the class. “Galia, stop bringing politics into the classroom,” Yael said.

Galia’s father, Daniel Bar-Tal, a leading political psychologist, was not surprised by the teacher’s reaction. “Teachers convey the accepted values of the society in which they live,” Bar-Tal recently told Al-Monitor. “Any education is political, and any map of the State of Israel is political, but the Green Line runs counter to the prevailing spirit [of ignoring the occupation of the West Bank], and the teacher therefore views it as wrong.”

Galia’s story provides yet another explanation for the strengthening of the conservative right at the expense of the Zionist left. Thousands of Yael’s former students who cast their ballots in the April 9 elections were taught that the State of Israel extends from the Mediterranean to the Jordan River and that anyone challenging this view is deviating from the truth, the consensus, “Israeli-ness.” The teacher herself may not even know about the Green Line because the demarcation of Israel’s June 4, 1967, border was missing from the books she had as a pupil.

Surveys conducted in 2015 and 2018 by New Wave Research for the newspaper Yisrael Hayom indicate that every second student and teacher do not know what the Green Line is. One of the teachers wrote that it was “not a real border,” but rather “a border according to which people decided the Land of Israel should be divided.” Other answers to the survey question included “an imaginary leftist line,” “a border between Israeli Arabs and Israel,” “the line demarcating the 1969 borders,” “a border crossing between Israel and Palestine,” “linked to the State of Israel’s borders or something like that” and even “a hotline to report environmental issues.”

Daniel Bar-Tal, an expert on school curricula and decidedly on the left, notes that governments use textbooks to methodically convey broad national narratives. “Textbooks express the ideology and ethos of a society,” explained Bar-Tal. “They instill values, goals and myths that society seeks to broadcast to new generations.”

The ideology expressed in negating the Green Line ties into the de-legitimization of the political camp that supports dividing the land between Israelis and Palestinians along the 1967 lines. If Rabbi Rafi Peretz is appointed Israel’s next minister of education, as appears probable, the chair of HaBayit HaYehudi and of the United Right in the Knesset, will use state schools to instill the vision of a Greater Land of Israel in the minds of young Israelis.

Ram Cohen, principal of Tel Aviv’s Tichonet-Alterman high school, was also not surprised about at Galia Bar-Tal’s story involving Yael. “The teacher internalized the ideology of the political right that invalidates the political left and is afraid to conduct an open discussion with students about ‘political’ issues,” he told Al-Monitor.

Cohen views this attitude as an expression of ignorance about the essence of democracy taking root in Israeli society. “They don’t understand why it’s wrong to shoot a bound Arab boy and think that voting once every few years for someone suspected of criminal wrongdoing is fine,” Cohen said, referring to Prime Minister Benjamin Netanyahu, who faces possible indictment on corruption and bribery charges.

How is a teacher, let alone a student, supposed to deal with the inherent contradictions created by the 2018 Nationality Law codifying the Jewish nature of the State of Israel, Netanyahu’s declaration that “Israel is the nation state of the Jewish people, and them alone,” and the State Comptroller’s demand that schools clearly state that “Israel is a democratic state belonging to all its citizens”?

In a 2016 report, the comptroller wrote, “The State of Israel is doing very little to purge the severe phenomena of racism and hatred among youth and to promote a shared society.” The government watchdog also asserted, “Education for a shared society and prevention of racism has been only partially and inadequately integrated in the education system; teachers for this important area have not been trained.”

Zeev Degani, principal of Tel Aviv’s Herzliya high school, told Al-Monitor that although the Ministry of Education clearly allows teachers to express their political views, they avoid doing so. “The only ones doing so are those who talk about the ‘Greater Land of Israel’ because they know the minister of education will back them,” said Degani. The school system, he added, is “full of frustrated reserve service generals and cowards.”

Degani remarked that a map showing the Green Line hangs at the entrance to his school’s library. “This is my mezuzah [i.e., what one believes in], and it will stay there until I’m kicked out,” he declared. Degani is proud that on election day, 85% of students cast votes for centrist and left-wing parties in a mock ballot at his school. These include children from Tel Aviv’s southern neighborhoods, where the right traditionally enjoys greater support. That means, Degani remarked, that the children know the Green Line is not the platform of the Green Party.

Degani and Cohen enjoy greater freedom than many Israeli principals do. Their schools are well known in Israel, so they can afford to open them to talks by representatives of Breaking the Silence and other leftist organizations. The day after the elections, dozens of senior educators from around the country began organizing in a bid to free school principals of the fear of deviating from the official straight and narrow.

“The time has come for principals and teachers to wake up,” Cohen said. “They must understand that they bear responsibility for the fate of future generations.”