Two ceremonies in November will commemorate the assassination of former Prime Minister Yitzhak Rabin, neither of which will focus on the reason he lost his life: his efforts to achieve peace with the Palestinians. 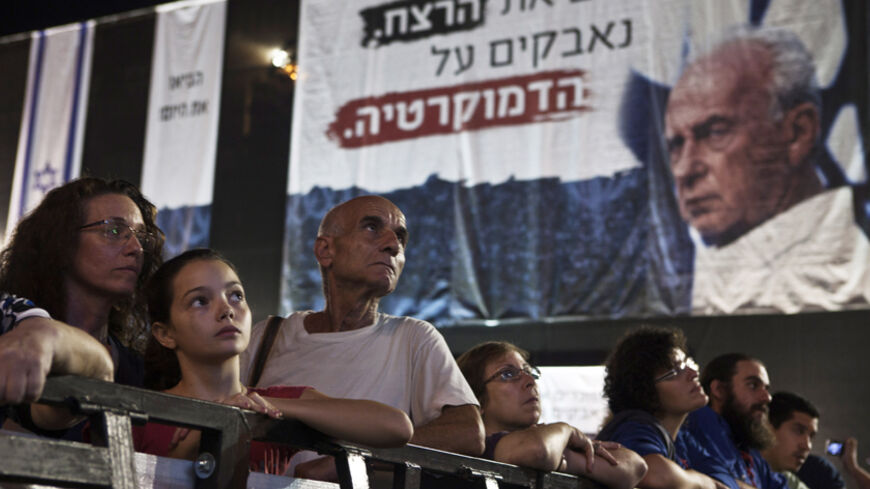 Two commemorative events will be held in early November to mark the 19th anniversary of former Prime Minister Yitzhak Rabin’s assassination. The first, on Nov. 1, will focus on the issue of peace and the regional peace initiative. The keynote speaker at the rally will be former President Shimon Peres, a Mapai Party (mother party of today's Labor Party) alumnus and Nobel Peace Prize laureate for his contribution to formulating the 1993 Oslo Accord. The main speaker at the second rally, on Nov. 8, which will call for the preservation of democratic values in Israeli society, will be President Reuven (Rubi) Rivlin — a right-winger, a sworn advocate of the revisionist Zionist leader Ze'ev Jabotinsky doctrine and one of the leading opponents of the Oslo Accord.

Although Rabin paid with his life for choosing the route of peace with the Palestinians, the organizers of the two rallies opted to suppress — to the point of completely concealing — the conflict between Israel and the Palestinians. Both events will be ''stately,'' devoid of criticism for the policies of a government that is pulling Israel in a different, if not opposite, direction to that which Rabin espoused.

In an interview with Mazal Mualem on Oct. 17, Yuval Rabin, the son of the late prime minister and the founder of the Israeli Peace Initiative group that is sponsoring the first event, promised that “at the rally, we’ll be calling on the government to make good on what it says.” In that context, he brought up the speech in which Prime Minister Benjamin Netanyahu spoke about “new opportunities” that had arisen following Operation Protective Edge in the Gaza Strip. After seven years of Netanyahu’s rule in three separate terms in office — the worst seven years Rabin’s vision of peace ever knew — his son, so it seems, believes that the leader of the right wing will agree to give up more than 90% of the West Bank, evacuate 120,000-150,000 settlers and conduct serious negotiations over Jerusalem and the refugee problem. In my view, that is the price of a regional peace agreement, according to all indications.

Rabin’s approach is not unusual. The Yesh Atid Party, some of whose Knesset members consider themselves left-wingers, as well as Justice Minister Tzipi Livni’s Hatnua Party and its Knesset members Minister of Environmental Protection Amir Peretz and Amram Mitzna, formerly of the left-wing flank of the Labor Party, are all deeply embedded in a coalition that nurtures the settlement process and shortchanges the peace process. Neither Finance Minister Yair Lapid nor Tzipi Livni are likely to initiate a government walkout so long as Netanyahu is interested in keeping his coalition intact.

Yesh Atid and Hatnua have extenuating circumstances. After all, their leaders serve in the government and owe allegiance to its policies and official positions. The Labor Party, the main opposition party whose leader was assassinated because he dared raise the flag of peace, is the one that should be criticizing those policies from the left and leading the protest against them. Instead, Rabin’s political heirs have flown a white flag. On the eve of the vote in the British Parliament on recognition of a Palestinian state, on Oct. 14, Knesset member Hilik Bar, the secretary-general of the party who proudly bears the title of “head of the caucus for a two-state solution,” appealed to the heads of British Labor. “Immediate and unilateral recognition of Palestinian statehood does nothing to advance this vital cause. In fact, precisely the opposite,” he wrote, explaining that unilateral moves will serve the “deep” right wing and help its people claim that there is no partner for peace.

Knesset member Zahava Gal-On, leader of the Meretz Party, did not go easy on Bar and the members of his party. “The Labor Party is acting like a branch of Netanyahu’s Foreign Ministry, a sort of coalition within the opposition,” she lashed out. She is considering recommending that her party’s Knesset members resign from Bar’s caucus. In addition, while a senior Labor official was busy joining the international campaign against the acceptance of Palestine by the United Nations, Meretz began a campaign under the slogan “Israel: Yes!” arguing that Israel’s interest requires it to be the first country to support such a move.

This dialogue between senior partners within the same camp could have been perceived as a dispute between politicians wrestling for the same constituents. But unfortunately, it is typical of a deep and prolonged argument within left-wing Zionism: whether to try becoming endeared by the center to return to power, or to hone positions and hope that the public appreciates them and, perhaps, even becomes convinced that there is a clearly defined alternative to the policies of the right.

There are also quite a few public figures within the camp that support two states and oppose settlements, who prefer sitting on the fence. One foot here, one foot there. For example, Knesset member Mickey Levy of Yesh Atid, Knesset member Elazar Stern of Hatnua and Maj. Gen. (Res.) Amos Yadlin, director of the Institute for National Security Studies. All of them are members of the public council of the right-wing nongovernmental organization Elad, which signed an ad welcoming the families who just moved into the Palestinian neighborhood of Silwan, the name of which was altered to "City of David." Silwan is considered a powder keg that has set Jerusalem on fire on more than one occasion. By the way, the name of Nobel Peace Prize laureate Elie Wiesel graces the top of the ad.

Daniel Bar-Tal, a political psychologist and scholar of Israeli society, believes the main problem of the left wing does not lie in political defeatism, nor in chasing after the spirit of consensus or in internal disputes. In a talk with Al-Monitor, Bar-Tal said that the Achilles' heel is to be found in the gap between the political worldviews in Israel: on the one side stands the leftist view of the world, which is anchored in the liberal-democrat culture, even when it bases itself on Zionist-liberal ideas; on the other side stands the worldview of the mainstream Jewish public, and of course the perceptions of the right wing, which basically contradict the peace camp worldview. The difference lies in that the right wing succeeded in delegitimizing the left and its positions concerning the occupation and the conflict.

For more than 25 years, excluding the short ruling period of Rabin, a right-center coalition has been governing Israel. Until the beginning of the 1990s, 40% of Jewish Israelis defined themselves as left-wing. Today, some 20% do. Terrorism and also the claim by former Prime Minister Ehud Barak that there is no Palestinian partner for peace have contributed largely to the situation where left-wing supporters flee the camp. According to Bar-Tal, who headed a study of Israel’s civics textbooks, the Israeli Jew undergoes a process of socialization and indoctrination from birth in the spirit of the right wing. “Being a citizen who holds left-wing views is considered treason,” Bar-Tal said. “The leaders of the right in the government and the Knesset reiterate these messages and have turned the views of the right into an ethos that defines the identity of the Israeli Jew.”

And indeed, a liberal comment of yore, once obvious and taken for granted, is today considered a deviation from the consensus. Rivlin, who as mentioned is a fervent right-winger, is ''accused'' of leftism and is subjected to harsh vilification, following his attacks against manifestations of racism and hatred of Arabs. Jabotinsky, who wrote in his book on Zionist revisionists that “a strong Arab population, politically, economically and culturally will forever remain the main guarantee of a strong and healthy Land of Israel as a whole,” would today likely have been considered a fifth column in the Likud Party. The man who said that “the Hebrew language and the Arab language will have equal rights and validity” would not have been allowed to cross the threshold of the Likud headquarters building in Tel Aviv, Metzudat Ze’ev, which bears his name.