Who is afraid of Arab Israelis?

The absence of the Zionist Camp from the rally against the Nationality Law constitutes a failure of the opposition and strengthens Prime Minister Benjamin Netanyahu. 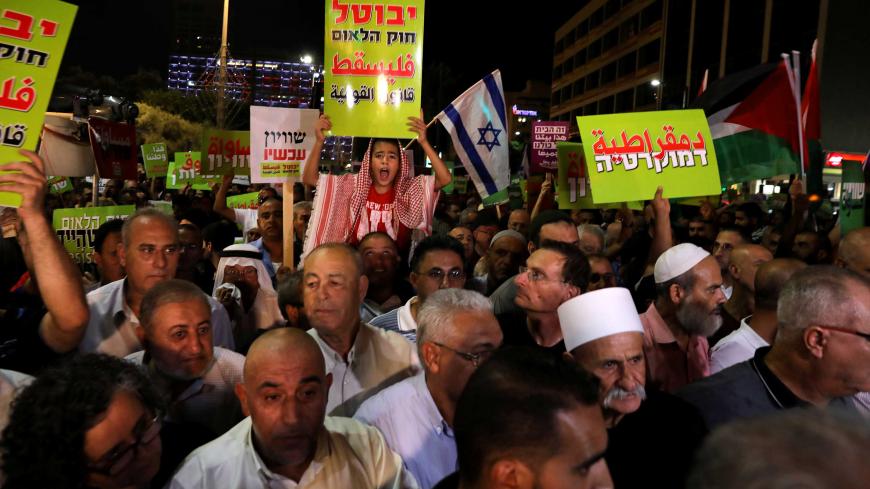 Israeli Arabs and their supporters take part in a rally to protest against Jewish nation-state law in Rabin square in Tel Aviv, Israel, Aug. 11, 2018. - REUTERS/Ammar Awad

“It’s a good thing [Zionist Camp leader] Avi Gabbay didn’t show up here,” said one participant at the rally on condition of anonymity. “That’s all he needs, for [Prime Minister Benjamin] Netanyahu to spread a photo of the Zionist Camp leader against the backdrop of a Palestinian flag.” At the same time, Gabbay was telling Hadashot News that he had stayed away from the protest because its organizers, the Balad Party and the Arab Joint List (the alliance Balad is part of), “support the right of return” of Palestinian refugees and do not believe in a Jewish state. His colleague and leader of the parliamentary opposition, Tzipi Livni, said she sat out the event because some members of the Joint List do not share her view of the State of Israel as the nation-state of the Jewish people. The vast majority — 22 out of 24 — of the Zionist Camp’s Knesset faction, the biggest parliamentary opposition group, as well as members of the second-largest opposition party, Yesh Atid, stayed home that night.

“I am most concerned by my fellow travelers who are afraid that standing up proudly against the incitement campaign [by the political right] could hurt them publicly or politically,” said Knesset member Mickey Rosenthal of the Labor Party, one of the two factions comprising the Zionist Camp. Rosenthal was standing in Rabin Square alongside Zouheir Bahloul, until recently a fellow party lawmaker who quit over the Nationality Law, and Knesset members of the left-wing Meretz Party and the Joint List. “People make choices according to various considerations,” Rosenthal said. “I am totally at peace with mine. My conscience is clean. If I have to pay a political price, I will.”

Brig. Gen. (Res.) Ami Ayalon, one-time head of the Shin Bet and a former Labor Party Knesset member, was harshly critical of his defense establishment colleagues for coming out to support a protest rally by the Druze minority Aug. 4, but staying away from the one organized by representatives of Israel’s 21% Arab population. “Those of us who don’t come are in effect joining Netanyahu and selling out the democratic value of equality for a pittance,” Ayalon wrote in a Facebook post. “Obviously, I will not agree with everything that is said on the podium and will not identify with the flags that may be raised there. I am joining the demonstration not in support of its organizers and identification with all its messages, but because of my belief that there is no Zionism without democracy and there is no democracy without equality for all.”

However, Gabbay, Livni, Yesh Atid Chair Yair Lapid and their friends would rather hide out in the warm embrace of the political “center.” “Livni never truly left the Likud Party and Gabbay never really left the Likud government,” former Knesset member Mohammad Barakeh told the participants at the rally. He was referring to the fact that Livni had been a longtime member of the right-wing Likud before shifting to the center, and Gabbay was a minister in Netanyahu’s government until he quit. “We who have joined together in the square will overcome. We are offering sincere Arab-Jewish cooperation in order to create reality and justice,” added Barakeh, who heads the High Follow-Up Committee for Arab citizens of Israel that coordinates Arab political activity in Israel.

Israeli Prime Minister Yitzhak Rabin, assassinated in 1995 in the square where the protesters convened and which is named after him, had forged an alliance with Israel’s Arab citizens during his term in office. He was not deterred by the racists who accused him of relying on “a non-Jewish majority” for approval of the 1993 Oslo Accord he signed with the Palestinians. By absenting itself from the rally, the Zionist Camp missed a unique opportunity to become an “Israel Camp” based on a Jewish-Arab coalition against the Nationality Law, which codifies Israel’s status as the nation-state of the Jewish people. Rather than leading the public along the road paved by Rabin 25 years ago, the Zionist Camp is being led by opinion polls showing a distinct public leaning to the right. In their speeches, they laud democratic values and the principle of equality, but they refuse to have their picture taken with them. This is the same party that as a member of the 2009 Netanyahu government posed for photo-ops with Avigdor Liberman, the hawkish minister who incites incessantly against Israel’s Arab citizens and their leaders.

Instead of attacking Netanyahu for turning Israel, de facto, from a Jewish and democratic state into an ethnocratic apartheid state, Gabbay chose to lash out at rally participants. Instead of getting up on stage and declaring that “Netanyahu has forgotten what it means to be Jewish” — as Netanyahu famously said of the Israeli left — the Zionist Camp leader stigmatized tens of thousands of protesters as supporters of the Palestinian right of return that would wipe out Israel’s Jewish majority.

The top of Gabbay’s Facebook page is adorned with the slogan “Victory is Up to Us.” Let's assume for a moment that the Zionist Camp defeats the right-wing governing coalition and garners 30 seats in the 120-seat Knesset. Who could he mobilize to form a ruling coalition? Could he afford to rule out representatives of the Arab minority, who view themselves as both Israeli citizens with equal rights and part of the Arab-Palestinian people? Just like American Jews, whose US citizenship does not contradict their affinity for the Jewish nation and who wave Israeli flags alongside the Stars and Stripes at protests and on Israel’s Independence Day.

In shunning the Arabs as lepers, Israeli-Jewish opposition groups are playing along with the Netanyahu school’s divide and conquer policy that pits “patriots” against “leftists,” Jews against Arabs, Druze against Muslims. There is no guarantee that the Supreme Court justices deliberating the petitions submitted against the Nationality Law will pull the Jewish opposition’s chestnuts out of the fire. Justice Minister Ayelet Shaked has already threatened that a court ruling against the constitutional-type Basic Law would signal war between the branches of government. Either way, a law that discriminates against citizens on grounds of religion and nationality — the law encourages “Jews only” communities — and downgrades the mother tongue of a native-born minority is not a legal issue. This law is an issue of values and morals that etches an ugly scar on the face of Israeli society.

“In a place where there are no men, endeavor to be a man,” wrote the Jewish sage Hillel in the Mishna (Pirkei Avot 2) over 2,000 years ago. That man should be the top citizen of the State of Israel, President Reuven Rivlin, admired by most Israelis for his consistent views on civil rights. A man who believes in complete social and political equality for all citizens of Israel, regardless of religion, race and sex, as codified in the 1948 Declaration of Independence, would not be true to himself if he signs the Nationality Law making it official. (Legal procedures in Israel require the president to sign off basic laws.) An Israeli leader who advocates unity among the various tribes of Israeli society while preserving each tribes' identity cannot lend a hand to this law.