The second assassination of Yitzhak Rabin

Prime Minister Benjamin Netanyahu and his associates encouraged and benefited from the incitement that led to the assassination of Prime Minister Yitzhak Rabin in 1995, but are now portraying themselves as the real victims. 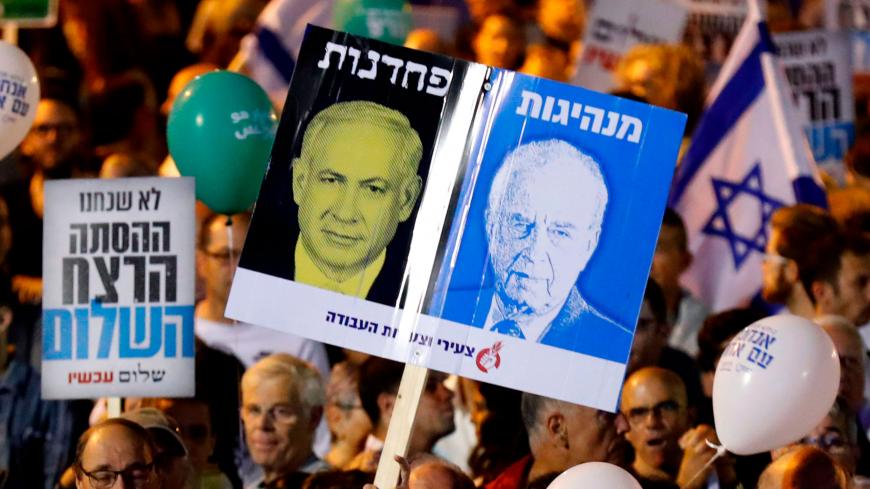 A demonstrator holds up a placard bearing the portraits of Israeli Prime Minister Benjamin Netanyahu (L) and the late Israeli Prime Minister Yitzhak Rabin, with writing in Hebrew that reads "Scared" (L) and "Leadership" (R), during a rally to mark the 22nd anniversary of Rabin's assassination, Tel Aviv, Nov. 4, 2017. - JACK GUEZ/AFP/Getty Images

They say time heals anguish and loss. As is only natural, the passage of years has dulled the anguish and loss over the assassination of Prime Minister Yitzhak Rabin by a Jewish terrorist, Yigal Amir, in November 1995. The political heroes of Rabin's assassin, who incited against Rabin in the months that preceded his death, are no longer content with the erosion of memory. The right-wing settlers and their supporters stubbornly reject any responsibility for the vitriolic wave of incitement that preceded the murder and caused the murderer, by his own admission, to shoot a prime minister in the back. The murder fatally sabotaged the Oslo peace agreement that Rabin had signed two years earlier with the Palestinians and helped the right wing, led by Benjamin Netanyahu, to inherit the state through subsequent elections, held in 1996. Now, on the 23rd anniversary of Rabin's assassination, the very same people who led the campaign against those they dubbed “Oslo criminals” have also declared themselves its victims, generously aided by the silent majority.

Shortly after the annual memorial rally held in Tel Aviv’s Rabin Square on Nov. 3, Prime Minister Benjamin Netanyahu tweeted, “It is regrettable that the memorial ceremony for the late Prime Minister Yitzhak Rabin became a political conference. Those who champion freedom of expression, try to silence anyone who disagrees with them.” Yair Netanyahu, his son and mouthpiece, then shared a Facebook post that said, “Proportions. One memorial day for 24,000 Israeli fallen; one memorial day for 6 million Holocaust fallen; 10 memorial days for Rabin murder.”

The chair of HaBayit HaYehudi, Education Minister Naftali Bennett, called the rally a “shameful leftist protest.” The patron of the most radical among the settlers, Bennett added for good measure, “The right did not kill Rabin, Yigal Amir did.” Knesset Speaker Yuli Edelstein went so far as to claim that it was doubtful that the assassin had achieved his goal, that is, stopping the Oslo peace process. If he did achieve any goals, Edelstein asserted, “They were the opposite from what Yigal Amir was intending to accomplish.” In other words, the political left was the big winner, at the expense of the right.

It fell to Regional Cooperation Minister Tzachi Hanegbi, a leading opponent of the Oslo Accords, to play the role of chief victim. Hanegbi, who had followed Prime Minister Ariel Sharon from the Likud to Kadima and then returned to the Likud, attributed short-term political motives to those who booed his speech at the Rabin rally. “I spoke to the people, and to the people's hearts,” he said after the event. He also asserted, “The attempt to attribute a murder by one zealot to half of the people was unsuccessful. We won't leave the sadness and longing we have to the other side of the political map. Our pain is the same, and therefore I'm glad I came.”

As for the booing, Hanegbi told the Ynet News website that he “attached no importance” to it. He added, “I was speaking to people at home, for whom it was important to hear my remarks.” Hanegbi, a Netanyahu associate, relentlessly incites against minorities, human rights organizations, journalists and police investigators. Referring to the post Yair Netanyahu shared, Hanegbi said, “There are some who escalate views ahead of an election year,” and he urged the public to adhere strictly to the rules of democracy when waging a political struggle.

Another speaker, Yair Lapid, head of the centrist Yesh Atid, was also met with loud booing and raucous trumpeting of vuvuzelas as he mounted the stage to position himself at his favorite spot — on the fence. He drew a direct parallel between “extremists on the left and extremists on the right,” as if the Israeli left had been complicit in the prime minister’s assassination. “Not all those who think differently are extreme or an existential threat,” Lapid continued with his imaginary symmetry, which has become the trademark of his hollow political wares.

Darkenu, the non-partisan group that organized the rally and purporting to express the views of the “moderate majority,” invited speakers whose views have absolutely nothing to do with those espoused by Rabin that cost him his life. They talk of “uniting the people,” but instead help smear the fingerprints of the right-wing leadership on the assassin’s gun.

In August, Knesset opposition leader Tzipi Livni and Labor Party Chair Avi Gabbay had refused to take part in a joint Jewish-Arab rally to oppose the Nationality Law, which enshrines the Jewish character of the State of Israel. Labor Knesset member Mickey Rosenthal, the only member of his faction to attend that event, expressed disappointment with his fellow lawmakers, who were worried about taking a stand in Rabin Square alongside representatives of Israel’s Arab minority, lest voters hold it against them. Rabin, it should be remembered, did not fear cooperating with Arab Knesset members, despite the racist criticism from the right, in order to push through Knesset approval of the Oslo Accords by a hair’s breadth. The opposition leaders showed up at the Rabin rally, however, despite the presence of a representative of the government that legislated the racist Nationality Law.

Knesset member Tamar Zandberg, head of Meretz, the only Zionist party that really took part in the August Nationality Law protest, was forced to fight with the organizers for her right to speak in Rabin’s memory. She may have been overstating things a bit when she described the murder as the “most successful political killing in history,” but judging by its outcome, it could certainly be considered the cleanest. Not only have the cheerleaders of the anti-Rabin incitement that paved the way for the assassination not paid a political price to date, but the current prime minister and his friends are staking out a claim for themselves as the victims of a political rival’s murder.

As Zandberg said, Netanyahu is making sure the legacy of the assassination remains intact so that the legacy of the peace Rabin willed can remain deeply buried. His 10 years in power, and with voters yet to change their minds, suggest time is on Netanyahu’s side.