Between 1993 and 1995, Israeli Prime Minister Yitzhak Rabin had developed a vision for a permanent status agreement that is still espoused by many veterans of the Israeli security establishment. 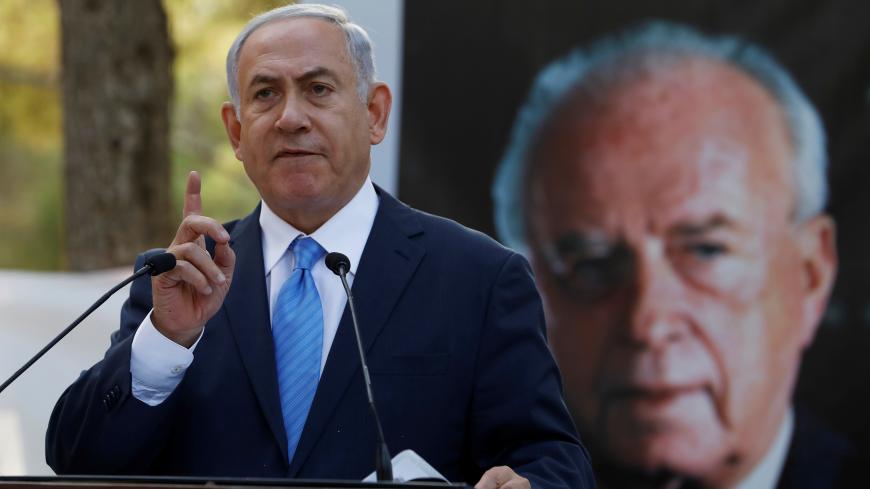 In recent years, the official memorial day for late Prime Minister Yitzhak Rabin has been a day of political controversy between the political left and right — between those who claim to continue the late prime minister’s peace legacy and those who rebuke the accusation that the incitement of the right over the signing of the Oslo Accord in 1993 led to the assassination of Rabin.

This year, Rabin’s son Yuval frankly confronted Prime Minister Benjamin Netanyahu at the memorial service held at Rabin’s gravesite, saying that his father did not enact legislation against those who criticized him. “Rabin never passed the buck or whined — even when he was exposed to the terrible expressions of hatred. He was everybody’s prime minister,” argued Rabin. He was referring to legislation attempts by Netanyahu’s associates to protect the prime minister from police investigations.

There are two debates relating to Rabin’s legacy.

First, there is a debate concerning the legacy of the Oslo Accord. This debate opposes those who welcome the accords with the PLO, intended to lead to a sharing of the land between the Mediterranean Sea and the Jordan River into two states, and those on the Israeli right who see the accord as a historical mistake abdicating lands that rightfully belong to the Jews.

The second debate, not less bitter, is over Yigal Amir, Rabin’s assassin, a religious, fanatic youth who studied at Bar Ilan University. Many believe that he was inspired to kill Rabin by right-wing Likud’s demagoguery denying Rabin’s policies and by the messianic rabbis of the settlement movement. There are others who claim that his act was that of a lone fanatic.

Naturally, the right camp rejects the accusations by the left, although no one can deny the violent nature of the anti-Rabin demonstrations at the time, such as the March 1994 demonstration where a mock coffin was carried by the crowds with the words Zionism and Rabin painted on it. Opposition leader Benyamin Netanyahu was marching there, at the Ra’anana junction.

These passionate and painful debates are unlikely to ever be resolved, as they reflect Israel’s deep political divide.

Dalia Rabin, the daughter of the late prime minister and the head of the Rabin Center, told Al-Monitor, “There was an unprecedented campaign against my father. He was targeted because in the mind of his critics on the right, ‘Mr. Security’ [Yitzhak Rabin] could actually lead Israel to the goals he set. The environment that was created by this incitement led to the assassination of both him and the hope he had created.”

Referring to the Oslo process, Rabin said, “Yitzhak Rabin was a pragmatic, responsible and courageous leader, who decided to give peace settlement with the Palestinians a chance, knowing all too well the difficulties and complexities of such a process.” His main aim, she concluded, “was to give the young Israeli generation the chance for the life they deserve.”

A pertinent question to be asked nowadays is what Rabin would have done in the current reality, of total deadlock of the peace process. Al-Monitor spoke with several of Rabin’s closest associates, who paint a picture of a leader who had evolved politically and security-wise. Rabin was a product of Israel’s security establishment, “Mr. Security” as he was often called. The transition from a security hawk toward a leader pushing for peace with the PLO and Syria derived from his conclusion that Israel’s security in the long run could be guaranteed only by a political settlement coupled with military deterrence. A new relationship with the Palestinians was a must in order to preserve Israel’s democratic and Jewish identity. Rabin believed that the Oslo Accord was a necessary bridge to improve cooperation with the Palestinians, with the goal of reaching a permanent status agreement. It was clear to him that sharing the land with a national Palestinian entity was both possible and necessary.

More so. His closest former associates told Al-Monitor on condition of anonymity that between the years 1993 and 1995, Rabin had developed a vision for a permanent status agreement to be achieved before the year 2000.

There was also a Jordanian angle to Rabin’s plan, as he held the Jordanian kingdom in very high esteem. The plan proposed a Jordanian-Palestinian confederation that would be decided between the two parties.

The last part of the plan consisted of normalizing relations between Arab countries and Israel. At the time, Rabin even favored a peace treaty with Syria and was ready to give up the Golan Heights for the proper security arrangements.

Above all, Rabin believed in a strong strategic relationship with the United States, which would have made such an agreement with the Palestinians possible. He definitely had the courage to make the necessary decisions for such a deal. His peace and security legacy is today espoused by the most senior veterans of Israel’s security establishment.