The death of Yitzhak Rabin's legacy

Shimon Peres was not invited to the rally commemorating the 20th anniversary of Prime Minister Yitzhak Rabin's assassination, a sign of the rise of the right-wing camp and that the vision of peace shared by the two men no longer exists in Israel. 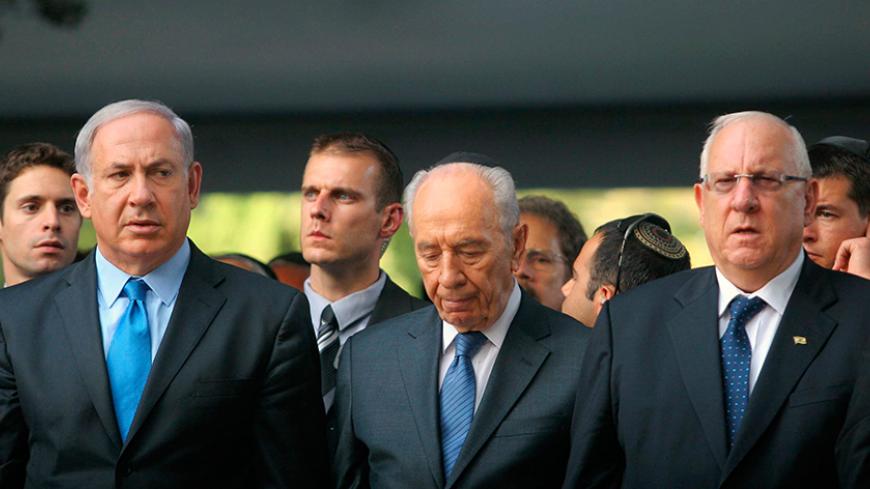 Israel will mark the 20th anniversary of Prime Minister Yitzhak Rabin’s assassination at the annual commemoration rally held at Tel Aviv’s Rabin Square on Oct. 31. Former US President Bill Clinton is scheduled to speak at the event as is Israeli President Reuven Rivlin. The person who won’t be there is former Israeli President Shimon Peres.

The resounding absence of Peres, Israel’s ninth president, symbolizes a transformative process in Israeli society over the last 20 years. The Israel of Rabin and Peres, of the Oslo Accord and the peace process, of optimism and hope is, alas, no longer. Israel 2015 — the Israel of Prime Minister Benjamin Netanyahu, Defense Minister Moshe Ya’alon, Education Minister Naftali Bennett and former Minister Avigdor Liberman — is an insular, unyielding, distrustful and sober state. Even the pursuit of a peace process is practically considered illegitimate. Oslo has become a four-letter word, and the current wave of terror is bringing out the basest instincts and rattling already tense nerves. Democracy is being weakened, radical elements are gainning strength and the fundamental values of the Jewish state are under constant attack.

In the first decade after Rabin's assassination, which occurred Nov. 4, 1995, the remnants of the Israeli peace camp fought over the “Rabin legacy.” Today, this legacy has been so thoroughly rewritten that little of importance remains from it. In the past, Rabin’s legacy stood for striving for peace and reconciliation between Israel and its neighbors from a position of military and inner strength. Today, a large majority of the Israeli public feels that there is no such thing as the Rabin legacy.

That Peres will not be present at the main rally marking Rabin’s assassination has been met with almost total silence. Peres — who stood at Rabin’s side in the last minutes of his life, who sang the “Song of Peace” with him during the closing moments of the rally they attended that Nov. 4, who brought Rabin around to the Oslo process, who tried to continue along Rabin’s path but was halted — will make do this year with more marginal events commemorating the assassination. Peres has been pushed from center stage this year, as have the peace agreements signed by Rabin and the hope that Rabin tried to restore to the people.

At the end of the day, the camp opposed to Rabin, parts of which actively participated in the incitement against him in the last months of his life, was the camp that won. It took control of state leadership in the person of Benjamin Netanyahu, who won the elections conducted less than a year after Rabin's assassination, in May 1996. Afterward, in 2000, came the second intifada, which drowned hope. Now, the Israeli right has also taken control of the nation's collective memory. A representative of the right, President Rivlin, and even a representative of the religious Zionism that spawned Rabin's assassin, Yigal Amir, will be at the Rabin Memorial Rally in the form of the moderate Rabbi Yuval Cherlow. Rabin’s “way of peace” will have no representative.

Until now, Peres had addressed every memorial rally for Rabin. This year, however, several members of the Israeli Youth Movement Council, which organizes the event, rejected him. They felt that Peres’ presence would lend political overtones to the rally. Thus, the circle has been closed. The right wing's victory in Israel is complete. The way of peace has taken its last breath, along with Rabin.

It is important to remember, however, that the resounding defeat of the Israeli peace camp came about thanks to a partner: the murderousness of some Palestinians as reflected in the wave of suicide attacks that overwhelmed Israel after the Oslo Accord. This led to the rise of the right and the public's loss of trust in the possibility of achieving a real reconciliation with the Palestinians. Years after that came the “Arab Spring,” which turned the entire Middle East into a chaotic jungle where the only thing uniting its diverse components was hatred of Israel. With the current state of affairs, Israeli society has reacted to its environs with its conditioned, characteristic reflex. Rabin must certainly be turning in his grave. Only minutes before Amir’s three bullets in Rabin’s back put an end to the prime minister’s life, Rabin had been singing the “Song of Peace.” Since his departure, the sound of that song has been muted, just like calls for the hoped-for peace.

Since Rabin's assassination, a debate has been waged in Israel about what would have happened had Rabin not been killed. Each side has its own theory. The right is convinced that Rabin would have lost the elections to Netanyahu anyway, and nothing would have changed substantively. The left is convinced that Rabin would not have allowed terror to continue to run amok and would not have hesitated to suspend the peace process until acts of terror had been suppressed. Rabin was a pragmatic, security-oriented leader, a famed chief of staff for the Israel Defense Forces who opted for diplomatic negotiations, not out of love or esteem for the Arabs, but out of a sober, realistic assessment that such an agreement was in Israel’s best interest. In contrast to Peres — the hopeless optimist who dreamed of a “new Middle East” and nurtured relations of mutual trust with Palestine Liberation Organization Chairman Yasser Arafat — Rabin had no illusions. His handshake with Arafat in September 1993 on the White House lawn at the signing of the Oslo Accord almost cost him his health. Rabin’s dwindling adherents are convinced that he would have curbed terror, called Arafat to order, won the elections and completed the peace process.

Unfortunately, this debate can never be settled, and each side continues to stand by its version of “what if.” Meanwhile, what has been determined is the situation on the ground. Although some debate continues, the right has won this one. Peres is still convinced that the “way of peace won out.” He says that Netanyahu recognized the Oslo Accord when he carried out the withdrawal from Hebron in 1997 and when he signed the Wye River Memorandum in 1998. The ultimate proof to Peres is Netanyahu’s 2009 Bar Ilan speech, in which he accepted the principle of a two-state solution. The right, with its conviction in Greater Israel, had added its signature to the two-state principle. All that remains now, Peres believes, is to translate the speeches and agreements into reality on the ground. At the moment, however, reality is being uncooperative.

Right wingers grimace at Peres’ words, and there are many reasons for this. When the Oslo Accord was signed, some 110,000 Israeli settlers lived in Judea and Samaria. Today, there are about 400,000. According to the right, this situation is irreversible. No power in the world can evacuate such a large number of settlers. Everyone still remembers the harsh images from the 2005 Gaza disengagement, implemented by Prime Minister Ariel Sharon, during which some 8,600 Jews were evicted from their homes. As the end of 2015 approaches, Israelis and Palestinians are joined at the hip in a way that makes it impossible to disentangle the intricate Gordian knot that connects them.

The number of supporters of the two-state solution on both sides is steadily decreasing with time. In Israel and the Palestinian territories, the “one-state” concept has gained traction, albeit in two different forms, a Palestinian and an Israeli version. Only Peres continues to have hope, in the depths of his heart, for a miracle, that someone like a modern-day Alexander the Great will emerge with a huge sword to cut the Gordian knot. Perhaps it is because of this that he is on the margins and will observe from the outside the gathering commemorating his partner Rabin, who was murdered by a Jew in one of the most successful political assassinations of the modern era.