Have Israelis forgotten that Rabin was killed over politics?

After years of sidelining the fact that Prime Minister Yitzhak Rabin's assassination was politically motivated, his son Yuval Rabin stands up and denounces the political incitement that led to the murder. 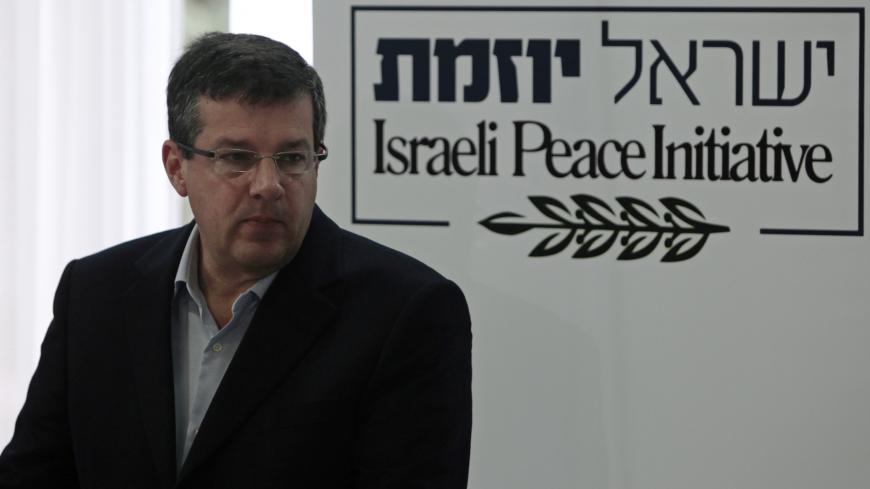 Yuval Rabin, son of the late Israeli Prime Minister Yitzhak Rabin, takes part in a news conference about a peace initiative he is behind, Tel Aviv, Israel, April 6, 2011. - REUTERS/Baz Ratner

At a ceremony beside Prime Minister Yitzhak Rabin's grave to mark the 22nd anniversary of his assassination, Rabin's son, Yuval Rabin, launched a stinging attack against Prime Minister Benjamin Netanyahu. Yuval Rabin's remarks were yet another attempt to bring discussion of the assassination back to the political arena, after years in which various elements in Israeli society tried to focus the commemorative narrative on such neutral and artificial terms as "tolerance" and "unity."

Rabin once attempted to get closer to Netanyahu to win his support for various diplomatic initiatives. It is possible that Rabin has since come to the conclusion that his own actions also helped obfuscate the memory of his father's assassination and the causes that led to it.

On Nov. 1, he used the only public forum left to him — his speech at the memorial service for his father — to remind everyone that the assassination was politically motivated and that it was preceded by uninhibited incitement. As he pointed out, 22 years later, "The mechanism of incitement and divisiveness continues to strike at us, and anyone who thinks otherwise is branded a traitor." Rabin didn't mention Netanyahu by name. Nevertheless, his stinging arrows were clearly hurled at the man who served as opposition chairman head of the Likud at the time of the assassination, and who has been accused ever since of failing to rein in the incitement against Yitzhak Rabin, when it reached a frenzied pitch among the right following the Oslo Accord.

Yuval Rabin recalled that his father was also criticized by the Supreme Court and extra-parliamentary organizations (for his role as defense minister during the first intifada). Nor did Yitzhak Rabin receive preferential treatment from the media. Nevertheless, "He did nothing to silence people, he did not try to evade his responsibility and he did not whine about it. Even his harshest critics found his door open, when they approached him. … He was the prime minister of everyone," Yuval Rabin said.

The comparison with Netanyahu was obvious. So was Yuval Rabin's insinuation that in an atmosphere where anyone on the left who criticizes the government is immediately branded a traitor, another political assassination cannot be excluded. Rabin stressed that his father's assassination was political: "That is the truth that we must deal with. Tempering the message and whitewashing the facts will not clear the way for the kind of solidarity that is so important to us. … It is time for a statement from the house on Balfour Street, calling for the complete eradication of violence and hatred from all of our homes."

The commemoration at Yitzhak Rabin's grave is one of a number being held this year; the main rally at Rabin Square is planned for Nov. 4, the actual anniversary of the assassination.

In the evolution of the remembrances for Rabin, this year's speech by his son marks a return to the kind of commemorations typical of the years immediately following the assassination, in which there was a clear political component. Back then, the Labor Party organized the main memorial event in Rabin Square, as the party had been headed by Yitzhak Rabin when he was killed.

At the time it was obvious that the assassination of Rabin was, first and foremost, a political act. Rabin pushed ahead with the Oslo Accord process. That was why the right incited against him. That was why Yigal Amir fired the three bullets that killed him. Over the years, however, that specific point was muffled. Instead of focusing on the causes and processes that led to the assassination, annual commemorations in Rabin Square began to focus on "reconciliation" and "solidarity" in order to draw a larger crowd. Labor Party leaders didn't even address the crowd, nor did they insist on doing so. One highlight in this disturbing trend occurred last year, when the Likud's David Bitan, chairman of the governing coalition, made the disturbing remark that Rabin's assassination wasn't politically motivated.

There seems to be a parallel between the decline of Labor as a major party, whose leader is also the head of the peace camp, and the gradual erasure of the political component from the official commemoration of Rabin.

Anyone who attended the first memorial events in Rabin Square will certainly remember Labor's show of power, even though the party lost an election to Netanyahu and the Likud just eight months after the assassination. Speeches then by Labor Party leaders Shimon Peres and Ehud Barak were razor sharp and unapologetic. So, for example, on the fourth anniversary of Rabin's assassination, in 1999, after the Labor Party under Barak was swept back to power, Rabin's diplomatic approach was a prominent theme of the event, with Barak featuring it proudly in his speech.

"We have come here to remember that it is impossible to forget," Barak told tens of thousands of people who came to the square to commemorate Rabin back then. "The promise will come forth from here: No more political violence, or violence in society, the family and on the roads. … From the site where Yitzhak Rabin was murdered, Israel sends out a call tonight: Despite everything, we will move forward toward peace, with no hesitation, with determination, while standing firm on our principles."

The first cracks in the political commemoration could already be seen in 2001, on the assassination’s sixth anniversary. The Likud, headed by Ariel Sharon, had returned to power, and the second intifada had erupted in October 2000. The commemoration occurred just weeks after the assassination of Tourism Minister Rehavam Zeevi on Oct. 17, 2001, and there were those on the right who drew parallels between the two events. It made no difference that Rabin was shot dead by a religious Jew, while Zeevi was killed in a terrorist attack by the Popular Front for the Liberation of Palestine.

In the ensuing years, the commemorative event in Rabin Square turned into an anemic demonstration by the country's youth movements. Labor, which had dwindled in size, gradually stepped back from organizing the event. This process took place at the same time as the public was losing trust in the possibility of reaching a peace agreement with the Palestinians, a shift to the right among the population, and an effort by the left and center to win support from Likud voters by leaning closer to their positions.

The Labor Party was in an uproar in 2010, when one of its Knesset members, Einat Wilf, called for the removal of Rabin's portrait from the party's Knesset conference room and went on to say that the party should consider canceling the annual commemoration event. The culmination of this process occurred after Shelly Yachimovich was chosen chair of the party in 2011. Yachimovich distanced herself from Rabin's legacy as much as she could in an effort to win support from voters on the right. She later admitted that this was a mistake.

Last year, the Labor Party assumed responsibility for organizing the Rabin Square event at the very last minute, only after learning that it might be canceled because of a lack of funding. While Labor is not taking any part in organizing this year's event, its new Chairman Avi Gabbay announced that starting next year, the party will lead the commemorative event again. As he put it. "Rabin was murdered in a political assassination. We must not forget this for a moment. The obscurity of the messages harms his legacy."

The left woke up after learning that the words "assassination" and "peace" did not appear in the invitation to the Nov. 4 event, which is being organized by two extra-parliamentary organizations: Commanders for Security and Darkenu ("Our Path"). Yachimovich, a member of the Knesset, may once have distanced herself from any hint of association with the Oslo peace process, but now her reaction was tinged with irony: "A stranger might think that Rabin died peacefully in bed at a ripe old age."

As they say, better late than never. It was from the Labor Party that Rabin set off on the task of his life, never to return. Now it must take responsibility for commemorating him.