Lack of participation in Yitzhak Rabin's 18th memorial ceremony testifies to the ongoing loss of interest by the Israeli public in the Palestinian issue, unless a new agreement is presented. 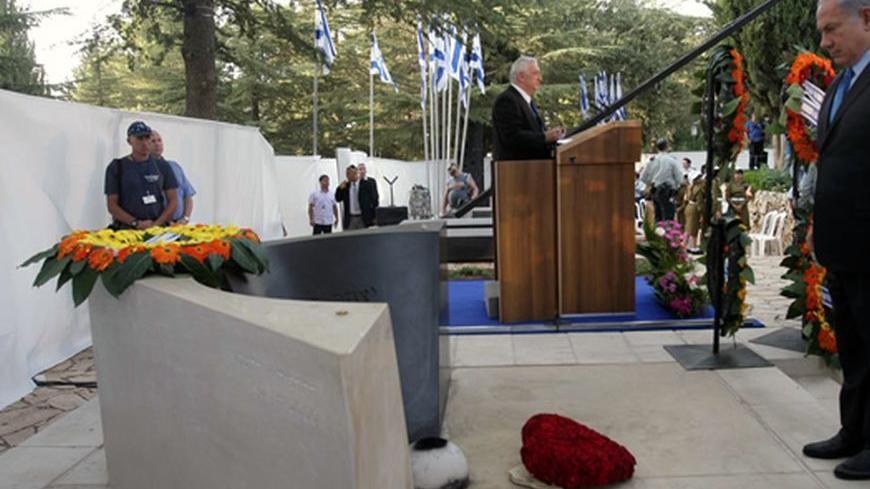 The transformation of Israel's main memorial event in honor of Yitzhak Rabin into a youth movement event titled “Remembering the Assassination, Preserving Democracy” is a perfect representation of the place Rabin's legacy has among the Israeli public 18 years after his assassination (Nov. 4, 1995).

Some 35,000 people gathered in Rabin Square, in the center of Tel Aviv, for the event on the night of Oct. 12. Most were youth movement members, both right and left wing. In other words, a large number of the attendees were not even born at the time of the assassination. Inevitably, they became the subject of intense discussion during current-event TV and radio shows the next morning. Studio discussions dealt with the general question of what happened to Rabin's legacy, the relative dearth of participants as compared with previous years and the reason why senior political figures and the general public alike were absent from this year's memorial, especially when compared with years past.

The general tone was critical and expressed a kind of longing for the way the assassination was marked in the early years. Back then, assembling tens of thousands of participants who were joined by political leaders from the left and the entire Rabin family needed no organization — while the event itself was broadcast on every channel imaginable.

In an interview on the Israeli Army radio station — with the event's moderator, actor Moshe Ivgi — anchor Niv Raskin tried to get him to compare the enormous funeral for Rabbi Ovadia Yosef, which took place on Oct. 7, and the significantly more modest event to commemorate a prime minister who was killed because of his efforts to achieve peace. Luckily, Ivgi was both wise and seasoned enough to avoid falling into that easily refuted populist trap.

Efforts to blame the current political leadership or the growing ignorance of the general population for the decline in the event's stature misses the main point: Most Israelis are not interested in the Palestinian issue.

Rabin was killed in a political assassination, which was intended to put a stop to a diplomatic process that would have resulted in the establishment of a Palestinian state. As such, it became an intrinsic part of Israel's political-diplomatic narrative. In other words, Rabin's legacy was not about preserving democracy in Israel, as it developed over the years, or the collective atonement for the sin of ignoring the violence that preceded the assassination.

Rabin was assassinated while on his way to fulfill a bold political vision, which — at that very moment — became the main banner of the diplomatic left and eventually of the political center, too. In a wider sense, one could say that this vision was also adopted — in word, if not in deed — by the man who came to lead the right over the past few years, Prime Minister Benjamin Netanyahu.

Ever since the second intifada and the failure of the Camp David talks under former Prime Minister Ehud Barak, the interest of the Israeli public in the Palestinian issue has worn out. The last prime minister to deal intensely with this issue was Ehud Olmert, but despite his generous offer to Palestinian Chairman Abu Mazen, he also failed to achieve an agreement and ultimately caused the general public to lose even more interest in the idea.

That is how the Palestinian issue was pushed from the top of the national agenda all the way to the margins, so that by Netanyahu's second term in office (2009-2012) it was all but neglected. Its place was taken instead by the Iranian nuclear threat and the social protest.

As such, it was more than just the passage of time and a right-wing government that caused Rabin and his legacy to be forgotten — ever so gradually — among the Israeli public. His diplomatic legacy simply stopped interesting people and became less and less relevant.

The most recent elections offered clear evidence of this general trend. Peace was practically a pariah, and was absent from most of the campaigns. In contrast, that very topic dominated the election campaign of 1996, which took place just a few months after the assassination. The Labor Party featured pictures of Rabin, former President Bill Clinton and former Palestinian Chairman Yasser Arafat on the White House lawn, while the Likud Party ran the unforgettable propaganda campaign based on the slogan, “[Shimon] Peres will divide Jerusalem.” It was that campaign which brought Netanyahu to his first term in office. Everybody talked about peace. The Labor Party focused on Rabin's legacy, while the Likud Party promised a “safe peace,” against the backdrop of the terrorist attacks that occurred in the wake of the Oslo Accord. Rabin's vision ripped the people apart.

The recent elections were a study in contrasts. Labor Party Chairwoman Shelly Yachimovich avoided Rabin's legacy, as if she was trying to escape from bad news. She did this because she saw that every possible poll indicated that the Israelis were tired of peace with the Palestinians, and were looking for solutions to their economic and social problems instead. Yachimovich assumed that focusing on these issues would help her draw in voters from the right.

In the end, her diagnosis was not wrong. Most of the Israeli public really is indeed not interested in the Palestinian issue. But the conclusions she drew were mistaken. The right did not follow her because it preferred its own leadership, while hard-core Labor Party supporters believed that she had gone too far in denying Rabin's vision and voted with their feet, leaving the party in droves. Her efforts resulted in the loss of two to three seats to the Meretz and Hatnua parties. Nevertheless, it is worth noting that this did not affect masses of voters, but only veteran Labor Party supporters who felt that she failed to give adequate voice to the clear economic and diplomatic agenda of the Labor Party and transformed it into a niche party instead.

And yet, despite all this, Rabin's legacy could easily become relevant again. That would happen if Netanyahu presents the Israeli public with an outline for an agreement with the Palestinians. Under such a concrete scenario, the battle between left and right over the partition of this land would return to life, along with Rabin's forgotten legacy and the political-diplomatic debate that divided the country, just like it did then, 18 years ago.