A series of new academic studies reveals that the self-silencing and mouth-muzzling phenomenon regarding the Israeli-Palestinian conflict has turned into an Israeli plague. 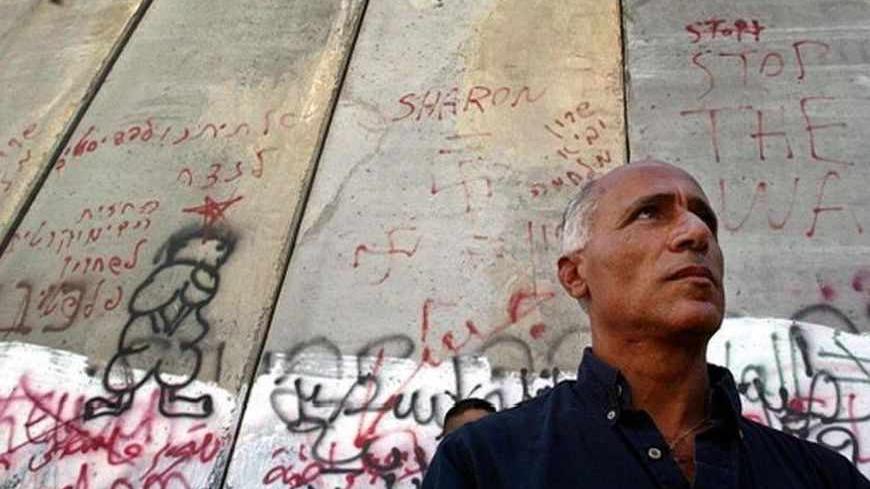 The Israeli nuclear whistle-blower Mordechai Vanunu stands in front of the separation wall, during a protest against the controversial Israeli security barrier in East Jerusalem, Aug. 27, 2004. - REUTERS/Goran Tomasevic

The affair surrounding Edward Snowden, former employee of the United States National Security Agency (NSA) who leaked information about NSA surveillance programs, reminded me of a personal story from more than 30 years ago. In a stormy discussion that took place in the editorial board of the Israeli daily Haaretz, two high-level newspaper employees demanded the shelving of a report I had prepared about how Shin Bet investigators had abused a Palestinian journalist held under administrative detention. They claimed that publication of the article — which was based on a polygraph test — would wreak great damage to the status of the state of Israel. Editor-in-Chief Gershom Schocken ordered the publication of the article in its entirety and even reprimanded one of the higher-ups who had called for me to be dismissed from my post.

I recalled the incident when I listened to a key lecture of professor Daniel Bar-Tal at the International Society of Political Psychology Summer Academy that took place from July 4 to July 7 at the Lauder School of Government, Diplomacy and Strategy, Interdisciplinary Center in Herzliya; Bar-Tal won the organization’s most prestigious prize. For the first time, Bar-Tal released findings of studies revealing the dimensions of the self-censorship plague in Israeli society.

The data presented to hundreds of experts attending the convention from across the world — from Indonesia to Egypt, from the United States to India — are not particularly flattering to a state that prides itself on the title of “the only democracy in the Middle East.” Bar-Tal described a study showing that the Palmach members — the underground of the Jewish community during the British Mandate in Palestine — swore themselves to secrecy regarding immoral acts they committed in the 1948 "War of Independence." The writers of the history of this war in the Israeli Public Diplomacy Forum and its Chief Education Officer Command decided, on their own, to spare readers from reports regarding the expulsion of the Palestinians, even though the historical facts were known to them.

The true circumstances regarding the war against the infiltrators in the 1950s and the border war with Syria in the 1960s were known to the tens of thousands of Israeli soldiers who took an active part in them. The large majority of them kept their lips sealed. “They saw that a false narrative was being created, but preferred to keep the skeletons in the closet,” Bar-Tal said. Another study conducted by the professor and his colleagues showed that the Israelis are aware of the price paid by a democratic society for its self-censorship — less democracy, pluralism or transparency. Nevertheless, they refuse to reveal the wrongs done to the Palestinians — even to Israeli organizations.

In an article published on July 15, Haaretz Editor Aluf Benn compared Snowden to the man nicknamed Israel’s “nuclear spy,” Mordechai Vanunu. While Snowden received support bordering on adoration from about half of the US public, Vanunu — who was convicted for his revelations on Israel’s atomic bomb secrets — is still viewed by a tremendous majority of the Israeli public as a despised traitor.

In an interview with Al-Monitor on July 16, Bar-Tal — considered one of the world’s most prominent political psychologists — explained, “There is an organization in the United States that protects people like Snowden and Vanunu, while in our consensual society people want a high level of self-censorship and believe that the media shouldn’t publicize things that harm the state’s positive image.” A salient example of this phenomenon was the announcement of Culture and Sport Minister Limor Livnat, expecting the creators of Oscar-nominee Israeli films “The Gatekeepers” and “5 Broken Cameras” to “employ self-censorship.”

Bar-Tal mentions a long list of events that belong to the self-censorship category: a new law that lengthens the time period in which documents remain classified does not allow materials to be revealed and reinforces the dependence of the media on informants; the mudslinging and dismissal of Adar Cohen, civics studies coordinator in the Education Ministry who tried to give expression to the Palestinian narrative in Israeli textbooks; the threats to close down Ben-Gurion University's department of politics and government, due to the non-conformance of several lecturers; and the disinviting of professor Rivka Feldhay (known for her critical views) from a meeting held in December in Berlin with German Chancellor Angela Merkel.

As a prominent example of the phenomenon, Bar-Tal mentions the negative attitudes of Israelis toward human rights organizations such as B’Tzelem and Breaking the Silence, when their only “sins” are transmitting reliable information about the wrongdoings taking place in the occupied territories. Currently, Knesset members are gearing up to promote legislative initiatives to clip the wings of these organizations by adversely affecting the contributions they receive from abroad. Over the last five years, organizations have arisen in Israel that keep close track of the publications of members in academia and and then try to delegitimize those academics whose research queries are too critical of, or in conflict with, the official narrative.

Bar-Tal diagnoses another self-censorship phenomenon that infuriates him even more than mouth-muzzling: when government officials collaborate with the struggles of politicians, against those who do not toe their line. He experienced this personally when then-Education Minister Gideon Sa’ar — current minister of the interior — declared war on a comprehensive study that Bar-Tal conducted with professor Sami Adwan from Bethlehem University about Israeli and Palestinian Authority textbooks. Sa’ar, together with several higher-ups in his ministry, waged a delegitimization campaign against Bar-Tal, using a method similar to the one employed in the Adar Cohen affair.

“As a scientist, I cannot ignore the fact that our society is in a conflict, and that it is characterized by norms of obedience,” explains Bar-Tal. “But for a society to resolve a conflict, it must be critical. If you can’t ask questions, you prevent transparency and public discussion. When you limit the flow of information and critical thinking, you do not enable the rectification of wrongs and you enter a destructive maelstrom that creates a flawed society. The silencing, the conformance, collaboration and tractability all feed the conflict. These are the clear symptoms of a sick society,” says Bar-Tal bluntly. “The continuous supply of correct, credible information — even if it is painful, sharp self-criticism, and even if it is irritating — is a mandatory element in the recipe for recovery.”