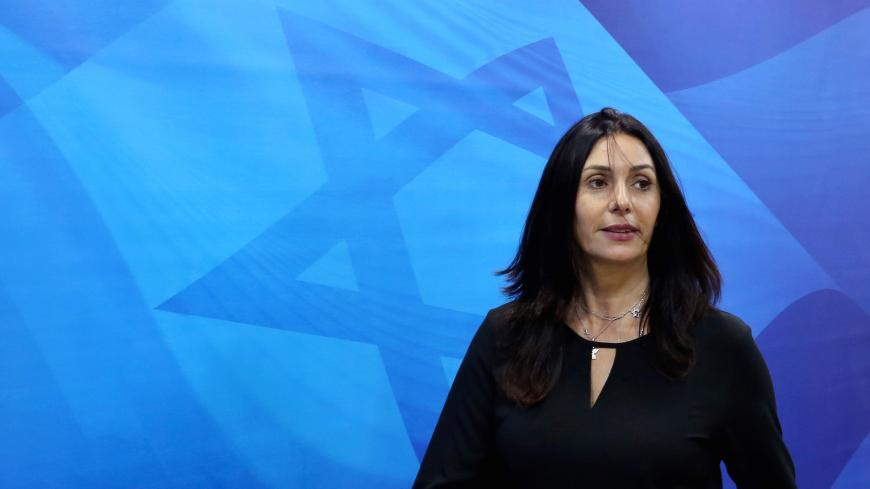 Even in the days of a caretaker transitional government, between elections, culture minister and former chief army censor Miri Regev refuses to lay down her censor stamp. The latest headliner is the documentary film “Advocate,” which tells the unique story of Jewish-Israeli attorney Lea Tsemel dubbed “the attorney of the terrorists.” The movie won first prize in May at the Docaviv International Documentary Film Festival in Tel Aviv, and as always, without even seeing it, Regev demanded that the national lottery that supported the film “dissociate itself from the prize and the festival leaders’ decision to award it to the film.” The national lottery management gave in and announced June 27 that it would examine legal options for rescinding its grant to the documentary and pull all future funding for the festival prize. Earlier in June, the directors of the Cinema South Festival decided to remove the film from its program, ignoring the recommendations of the festival's lecturers.

On June 21, a few dozen theater professionals convened at the Tzavta Theater in Tel Aviv for an “emergency conference” to discuss self-censorship in the theater. The message of the gathering, held under the auspices of the New Israel Fund and headlined “Censoring Ourselves to Death,” was clear: After four years as Israel’s culture czar, Regev has won.

“Israeli culture is growing silent in the face of the despotism practiced by the government ministries entrusted with supporting it,” playwright Motti Lerner wrote in a brochure handed out to participants. “They have forgotten that the role of the theater in a democratic society is to present ideas that challenge the consensus and offer soul-searching that encourages alternative thinking.” Lerner, whose play “Admission” deals with the trauma of the violent Israeli occupation of several Arab villages during the 1948 War of Independence, lashed out at the major repertory theaters (the Haifa, Cameri and Habimah) that refused to stage it. Lerner wrote that their decision was a "mark of Cain" for their leadership, who gave in to pressure and compromised the artistic integrity of the theaters they run. It was heard during the conference that Israeli audiences boycott politically themed theater, but the audience of 7,000 who filled the small auditorium of the Arab Theater, which staged the play, suggests otherwise.

Satirist and playwright B. Michael, one of the harshest critics of the occupation, recounted that the satirical cabaret he had written with friends Motti Kirschenbaum and Efraim Sidon was sold out for years. “The problem is not with the audience, it’s with those who dictate to it,” he said at the conference. “Give the audience straw, they'll eat straw.” In contrast, resident playwright of the Cameri Theater Gur Koren reported that the box office failure of Arthur Miller’s “The Crucible” forced the management to take it down after only 28 shows. He claimed, “Politics has stopped being of interest to audiences … people are sick of arguing.”

“That’s the biggest BS ever,” said playwright and prominent Shakespeare translator Avraham Oz, one of the founders of The Academy of Performing Arts that puts on superb fringe theater pieces. Just like his colleague Lerner, Oz places the blame at the door of repertory theater managers. In an interview with Al-Monitor, he claimed that for many years repertory theater managers bought into the idea that people come to the theater to be entertained and not face reality.

"Talented playwrights, some of whom were probably at the conference I attended, adapted their writing to the demands and expectations of unprofessional repertory committees of local performing arts venues,” he said. Oz, who is the founder of the theater department at Tel Aviv University and an associate artistic director of the Cameri, quoted his former student Michael Morris-Reich, who coined the term “buyers’ plays” almost 20 years ago in his PhD thesis. Although he does not dismiss the economic pressure imposed by the establishment on the culture and arts scene, Oz makes no allowances for his colleagues.

“Those who complain about theater managers should look in the mirror,” he said. “Where were they when the Culture Ministry dried up and then essentially shut down the Al-Midan Theater dedicated to fostering Arabic-language theater? Why did we not stand in line in front of the closed theater and protest its closure on clearly political grounds?”

Oz also points a finger of blame at creators who fail to make their voices heard in the face of what he calls the “unwritten boycott of Arab theater actors.” He himself cast Arab actor Suheil Haddad in the role of Shylock in his adaptation of “The Merchant of Venice.” In any other state, Haddad would have received leading roles, but in Israel he was hardly offered any for a very long time. The list of ostracized Arab actors is long, he said.

Daniel Bar-Tal, a member of the conference steering committee and a professor emeritas at Tel Aviv University, noted that many Israeli ministers dream of seeing all the country’s academics, educators and media figures think like them. This Orwellian vision is already manifesting itself in some countries. “Self-censorship usually starts out with small things,” he told Al-Monitor. “If it is not stopped, a wave comes along and sweeps up society, and by then it may be too late.”

Bar-Tal suggested that Regev watch the historical television miniseries “Chernobyl” to understand how a worldview focused on protecting the image of the state can lead to catastrophe. He made an impassioned call to the theater community to fight censorship from without and within. But the horses may have already bolted, and as one of the conference instigators and moderators, playwright and actor Oded Kotler, said half-jokingly before taking leave of the small audience, “If there’s no chance of making a difference, maybe we should just write comedies and be done with it.”