The new initiative of Culture Minister Miri Regev for the establishment of three film funds hides her true purpose — to offer the settlers their own propaganda film fund. 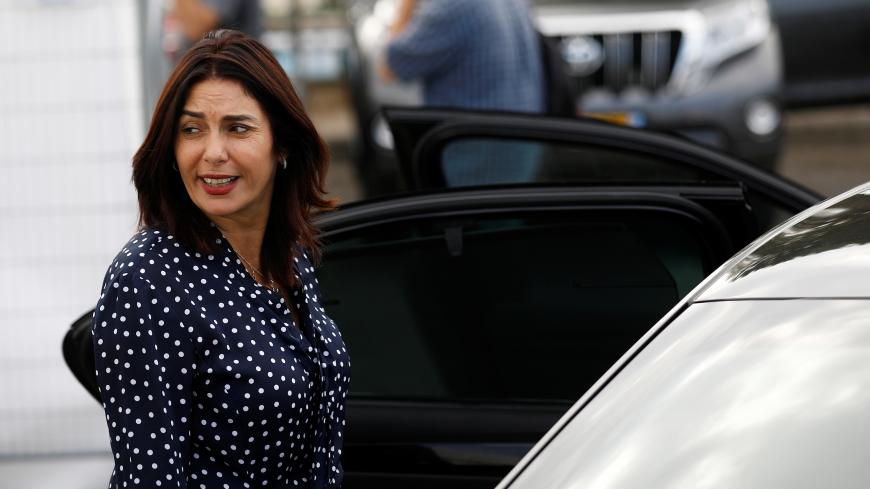 Israel's Minister of Culture and Sport Miri Regev leaves after speaking to members of the Israeli Ethiopian community during a ceremony marking the Ethiopian Jewish holiday of Sigd, Jerusalem, Nov. 7, 2018. - REUTERS/Amir Cohen

The Israel Film Council run by the Ministry of Culture and Sport approved Oct. 3 funding for three regional film funds as part of a series of reforms led by Culture Minister Miri Regev. Two of the new funds are located in northern Israel, one to be run by the Nof Hagalil Culture Center through the Rabinovich Foundation for the Arts, the other by the Galilee Film Fund. The third will operate in the West Bank and will be run by the Samaria Community Center. Eight million Israeli shekels ($2.29 million) was allocated for the funds’ annual budget, but the amounts for each were not reported. Will the division be equitable or will the Samaria Community Center enjoy a preferential allocation by the right-wing government? According to the Ynet website, half the total budget, some 4.1 million shekels ($1.17 million), will go to the Samaria fund and the rest will be divided between the Galilee funds.

The new funds are part of a series of so-called reforms Regev instituted to increase state funding for cultural enterprises in the country’s southern and northern regions, as well as in ultra-Orthodox and non-Jewish communities.

Support for filmmakers, mostly of documentaries, living outside the Tel Aviv bubble who might otherwise have been unable to promote their work through Tel Aviv-based culture funds appears a welcome initiative. Why the caveat? Because in 2019, the Culture Ministry under Regev already changed its support methods. The veteran funds, which yielded impressive achievements for Israeli filmmaking domestically and on the world stage, are obliged from now on to discuss funding requests without knowing the identity of the applicants. In other words, the film fund lectors discuss the story and the script but not the identity of the artist. They do not know who requested the funding, and accept or reject applications based solely on professional criteria. Not only that, from now on the lectors themselves are a mixture of artists from the center and the periphery, Jews and Arabs. Some are residents of the West Bank, meaning settlers.

The best funding method found in Israel so far is for film funds to operate in conjunction with established university or college film departments. The Gesher Multicultural Film Fund, for example, is an active participant in an initiative promoting filmmaking in Israel’s south in cooperation with the film department of the Sapir Academic College in the Gaza border town of Sderot. The new funds, however, will be administered by nongovernmental organizations (in the case of the Galilee funds) and by a community center, which is in fact part of the Samaria Regional Council.

That decision is strange. After all, the veteran Tel Hai College in the Galilee’s Hula Valley has a film school considered one of the best in Israel (thus the new Galilee fund could have partnered with it). Ariel University in the West Bank also has a communications department that includes film and television studies. Why should the new regional funds not operate alongside Tel Hai College and Ariel University?

It would seem that the Culture Ministry’s intention all along was to grant the Samaria Regional Council a film fund. In order to pave the way for such an enterprise and avoid the obvious question of why a regional council was chosen rather than a film school, it was decided to pick two NGOs from Israel’s north — one (the Galilee Film Fund) that supports film students and runs a youth cinema project and the other (the Nof Hagalil Culture Center) that comprises a network of community centers in the city known until very recently as Upper Nazareth (now called Nof Hagalil). Neither is linked with any film school, so that the Samaria Regional Council is not an exception.

According to a report on the right-wing website 0404, the Samaria Fund was thought up by the council’s spokeswoman Esther Aloush. It all started when the council wanted to produce a full-length movie filmed mostly in the Samaria region. The film — “A Hero in the Clouds,” filmed in 2017 in the settlement of Nofim with the support of the Samaria Regional Council — is a children’s musical starring a well-known children's TV star nicknamed Yuval Hamebulbal. The film critic of the Walla website, Avner Shavit, panned the film when it was released, writing in August 2018, “This is not the first movie filmed partly in [West Bank] Samaria, but this is the first time the local council has supported a movie with the declared goal of rectifying the image that some Israelis have of the region and presenting it in magical and beautiful contexts. In principle, this is a legitimate move: There are dozens of regional film councils in the world that encourage production in their areas and do so to enhance their image. However, those do not operate in such tense, sensitive and controversial areas from the point of view of international law, which are under administrative military sovereignty. The film tried to wave a magic wand, to make all these facts disappear and to convince us that Samaria is nothing but a Smurf village. … In that sense, it is not just another negligible children’s movie, but an example of Israeli repression at its best.”

And that is the whole point, to show life in the settlements in a positive light, as a Zionist enterprise glorifying the State of Israel. Head of the Samaria Regional Council Yossi Dagan described the fund as a “giant piece of good news. … I believe this move will bring the story of Judea and Samaria to the big screen. … I call on all artists to take part in this party, to come and film in Judea and Samaria and tell its story, so that we can present the public with other faces and other stories that have yet to be seen on the screen.”

In fact, this is the antithesis of award-winning Israeli films dealing with the Israeli-Palestinian conflict and the occupation, such as Samuel Maoz’s “Foxtrot,” winner of Israel’s Ophir Awards and the Lion D’Or at the 2017 Venice Film Festival. Regev claimed at the time that the film gives Israel a bad name, saying, “The state will not fund films that slander our country.”

This is not the first Israeli film to incur the minister’s displeasure. The documentary "Advocate," about attorney and left-wing activist Lea Tsemel, winner of this year’s Docaviv International Documentary Film Festival, also came in for a tongue-lashing from Regev over its portrayal of the human rights lawyer who has represented dozens of Palestinians in Israeli courts. Regev appealed to the attorney general to be allowed to ban its screening at the Maalot Tarshiha Film Festival and demanded that she be allowed to “stop this radical Palestinian propaganda.”

Regev is known to persecute artists, too, for example, theater actors who refused to perform in the settlements. In 2016, she threatened to fine cultural institutions refusing to mount their productions in the settlements and suggested incentivizing them with extra financial backing.

Now, in accordance with her views and ways, a film fund under the auspices of the Samaria Regional Council has been approved. It will be accompanied by the Gesher Fund, whose people are through and through professionals, but by its very definition, its goal will be to glorify the settlement enterprise. The extent of the right wing’s appreciation for the move is reflected in commentary by Yaakov Netanel, the rabbi of the Jewish film school Torat HaChaim, on the website of Channel 7 media outlet. “It is time to hone the tools and enter the arena armed with cameras and editing equipment. We must be articulate, sharp and precise, sanctify heaven’s name, show the world and remind ourselves that Judaism is telegenic.”