Israeli artists widely condemn the decision by the Acre Festival of Alternative Theater to exclude Einat Weitzman's play about Palestinian prisoners, saying the move is part of a dangerous trend of self-censorship in Israel. 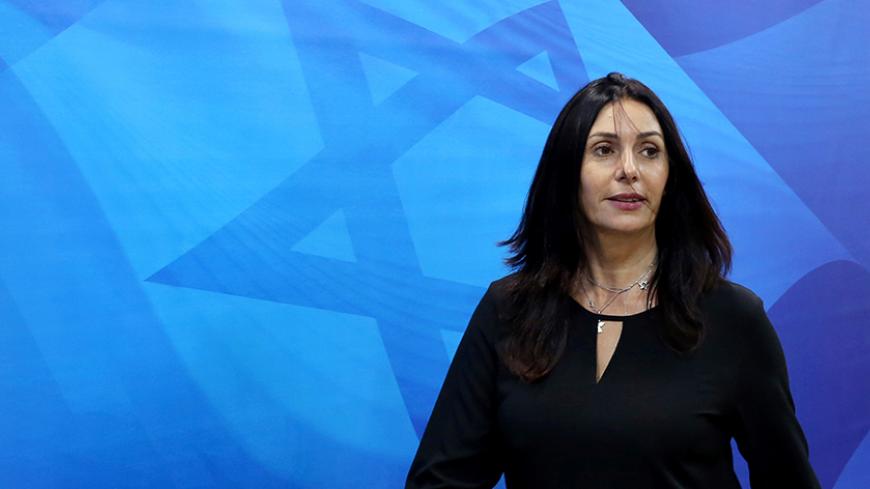 On May 30, various playwrights, directors and other artists announced their withdrawal from the Acre Festival of Alternative Theater, in which they were scheduled to take part in October 2017, following the organizers’ decision to ban the play “Prisoners of the Occupation” by Einat Weitzman. Their boycott of the play is another stage in the culture war being waged in Israel in recent years. The ban was not the result of a direct order by Culture Minister Miri Regev, who since taking office in 2015 has made it her practice to intervene in the contents of publicly funded events. But her activities have clearly created a threatening climate that limits free expression and leads theaters to practice self-censorship so as not to clash with her and endanger their funding.

The Israeli Actors Union called on all its 2,300 members not to take part in the festival and not to fill in for the artists who have withdrawn in protest. Theater actors throughout Israel have read statements of support to their audiences at the end of performances: “We support our fellow creators in their move and call on you to protect freedom of expression in the State of Israel.”

“Prisoners of the Occupation,” based on real stories and letters by Palestinian prisoners jailed in Israel, was presented to the festival’s steering committee for review by the event’s artistic director, Avi Gibson Bar-El. Over the years, the committee has steered clear of intervening in the contents of the festival, sticking to administrative issues. This year, its members — representatives of Acre municipality, government officials and former festival directors — voted to remove the play from the program. Last year, the festival featured Weitzman's play “Palestine, Year Zero,” about Palestinians whose homes had been demolished by Israel. Its star, Palestinian actor George Ibrahim, was chosen as the festival’s best actor. In an interview with Al-Monitor at the time, he said he felt it was his duty to participate because “Jews don’t see and aren’t interested in the other side.”

Last year, Regev had demanded that Weitzman’s play be banned, claiming that “no country, not even the State of Israel, would fund performances that undermine its existence.” The play nonetheless went on. This year, the steering committee did Regev’s job for her. All she had to do was jeer at the playwright and suggest that she put on her play in the Palestinian West Bank city of Ramallah rather than in Israel.

One of Israel’s top playwrights, Yehoshua Sobol, also canceled his participation in the festival with the play “Shkulim.” In a conversation with Al-Monitor, Sobol said, “The fact that last year a play with George Ibrahim was performed and this year there’s such a major fuss proves we are on a dangerous slippery slope. This isn’t even censorship. This is throwing out a creator’s play without even seeing it, simply because of the subject matter and because it involved Einat Weitzman.” Sobol said the steering committee that disqualified the play did not even read its synopsis. “The minute you ban a subject, you bring down an iron curtain on an entire part of our lives that cannot be touched or talked about,” he added.

Sobol shares the view of the various artists’ organizations in Israel that Regev’s previous activities led the festival’s organizers to rule out the play on their own initiative simply because of the issue with which it deals. The wind blowing from the ministries of culture and education (both headed by outspoken right-wing politicians) leads actors to acts of “self-castration” that are even more serious than self-censorship because they stop them from being artists, he said.

The Acre Festival of Alternative Theater was founded in 1980 by director Oded Kotler and produced by the municipality of the mixed Jewish-Arab coastal town in northern Israel. Many of the theater groups participating in the festival originate from outside the mainstream of Israeli theater. Several of the plays on the program are fringe and avant-garde works that are not featured on establishment stages. Since its inception, the theater has provided a platform for theater and performances critical of trends and events in Israeli society.

Director Alon Tiran told Al-Monitor that the artists who decided to pull out of the festival were motivated by solidarity with their colleagues, but their actions are primarily a struggle for freedom of expression. “Last year an attempt was made by Minister Regev to intervene in Weitzman’s play. The Ministry of Culture demanded to read the script, and the very agreement by the festival directors last year to let the minister read the play brought us to a play being banned [this year].” Tiran said the artists warned members of the steering committee that the move could derail the proud tradition of the festival and even result in its downfall, but they were not swayed.

Tiran is directing Sobol’s play "Shkulim," which tells of two bereaved families, one Palestinian, the other Israeli, who meet on the eve of the national Remembrance Day for fallen soldiers. The play is particularly relevant this year, several weeks after right-wing activists rioted at a joint rally of bereaved Israeli and Palestinian parents held in Tel Aviv. “How can a creation such as ours take part in a festival of alternative theater which has been robbed of the freedom and right to make other voices heard?” Tiran asked.

The artists who withdrew from the festival are seeking an alternative venue to stage their plays. They say they have been approached by municipalities and private entities throughout the country for talks to establish an alternative festival. Tiran added, “Our protest is not expressed only by boycott. It’s also expressed by putting on these important plays and demonstrating that one must not surrender to attempts to trample our freedom to make other voices heard.”