An event hosted by the Arab-Hebrew Theater in Jaffa supporting Israeli-Palestinian poet Dareen Tatour generated a harsh reaction by Israel's Culture Minister Miri Regev, who threatened to cut state funding to the theater. 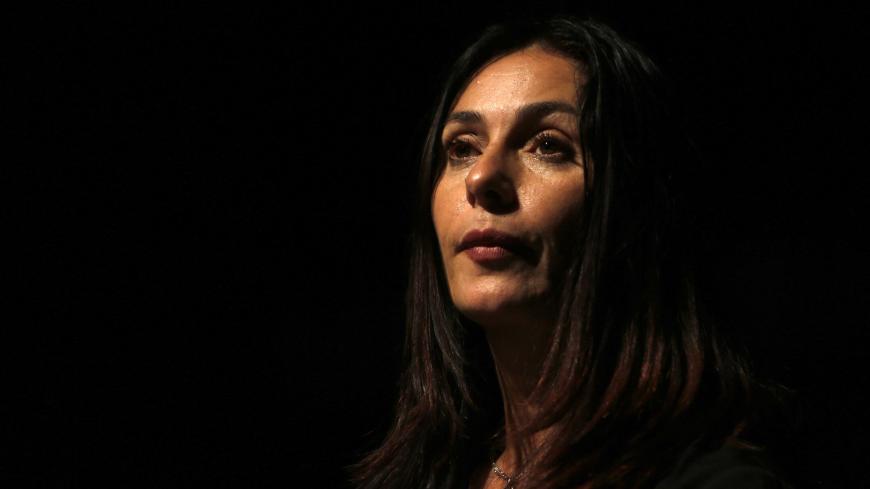 Israeli Culture and Sports Minister Miri Regev speaks before a theatrical event in the Israeli settlement of Kiryat Arba, on the outskirts of the West Bank city of Hebron, Nov. 10, 2016. - MENAHEM KAHANA/AFP/Getty Images

Minister of Culture Miri Regev is on the attack again and with all her might. On Aug. 21, she spoke out against the new film “Foxtrot” by director Samuel Maoz, which was accepted to two important film festivals, Venice and Toronto, and is a leading nominee for the Ophir Prize (the Israeli Oscar). The minister wrote in a statement that the way the film depicts Israel Defense Forces (IDF) soldiers tarnishes their names and plays into the hands of the haters of Israel. Regev added that funding for the film was allocated by the Israel Film Fund during the tenure of her predecessor, Limor Livnat, “and I can’t but be sorry for it.”

At the same time, the Ministry of Culture, at Regev’s direction, threatened to eliminate funding to the Arab-Hebrew Theater in Jaffa. In a letter to the minister of finance, Regev demanded to stop funding the theater because of an event the theater is hosting that calls for the release of the Arab-Israeli poet Dareen Tatour, who is accused of incitement and affinity with a terrorist organization and has been under house arrest for two years.

The event was the initiative of playwright and actor Einat Weitzman, and the theater is hosting it for a fee. In an interview with Al-Monitor, the theater’s director, Yigal Ezrati, said that two days before Regev’s letter, he received an email from extreme right-wing activist Shamai Glick, threatening harm to the theater.

For some time now, Glick has been inundating government offices with information on cultural events that he views as “anti-Israel,” and he even boasted in an interview to Israeli Calcalist that all of Regev’s decisions “started with a particular pest, and that’s me.”

In the email Glick sent to Ezrati (disclosed to Al-Monitor), he wrote, “Why do you need this headache? Representatives will come and call you to a hearing, will take away your budget and levy a fine, you’ll appeal to the High Court, and in the meantime where will you get the money? You think anyone will help you with money? Ask the Al-Midan Theater that totally collapsed because the state turned off the spigot. We’re not playing games. There’s already a committee that meets and decides on fines. Within a week. These aren’t threats; it’s eliminating your budget. I’m sure that you’ll be worried for your kids’ livelihood and that of all your employees and make the right decision.”

The Arab-Hebrew Theater espouses coexistence, and the plays it presents at its home in the mixed city of Jaffa give an Israeli audience the chance to see plays and performers from the Arab world in general and from among Arab Israelis in particular — those who don’t find a welcoming stage at other Israeli theaters. “We deal with intercultural encounters. For instance, we read aloud Umm Kulthum and Farid Al-Atrash and Mahmoud Darwish to a Hebrew-speaking audience,” said Ezrati.

Tatour was arrested in October 2015 at the start of the individual intifada when she posted a poem she wrote, “Rise Up My People, Rise Up Against Them,” on YouTube. On her Facebook page, she posted the photo of terrorist Isra Abed, who carried out an attack at the Afula bus station and wrote, “I’m going to be the next martyr.” Tatour was in jail for three months and then released and put under house arrest — not at her home in the village of Rayne in the north, but at an apartment in Kiryat Ono (at the demand of Israeli authorities) that her brother rented for her, with an electronic cuff on her ankle. She is forbidden to use the internet, the phone or any other means of communication so that she won’t be able to continue spreading incitement.

Only in May 2017 did the court decide to ease the conditions of her arrest. She now lives under house arrest in her village. During the day she can leave the house accompanied by a custodian. The prohibition on her use of the internet and phone remains.

The organizers of the event at the Arab-Hebrew Theater wish to stir Israeli public opinion. They argue that the only reason for her arrest is that she isn’t Jewish: “Many Jews wrote more severe critiques than she did and remain free,” said the campaign in her support.

These arguments are particularly noteworthy in light of the acquittal on Aug. 17 of professor Hillel Weiss, who was accused of incitement and threats made nearly 10 years ago against then-brigade commander of Hebron, retired Gen. Yehuda Fox, when settlers were evacuated from Hebron. He said, “We’ll rise to power and hang you from a high tree for everyone to see,” and equated the actions of Fox’s forces and those of the Nazi regime.

The event’s organizers as well as the managers of the Arab-Hebrew Theater are determined not to give in to the threats of the Ministry of Culture. “We don’t intend to cancel the event, but this causes many cultural institutions to self-censor because they are afraid,” Ezrati said. “They are afraid to do something unacceptable to the minister. We’re not.”

The last time Regev attacked the theater, regarding a play about Darwish, starring Mira Awad and directed by Norman Issa (who also received threats to his funding because he refused to appear at settlements), additional audiences who weren’t among the theater’s regulars came to see the play. “She did a public relations campaign for us. The play has been running for three years,” said Ezrati. According to him, this will also happen in Tatour’s case, whose story will reach many more audiences who hadn’t heard of her before.