Stars of the Israeli entertainment industry prefer not to confront powerful Culture Minister Miri Regev on the "Loyalty in Culture" law, designed to defund cultural institutions "undermining the state’s values and symbols." 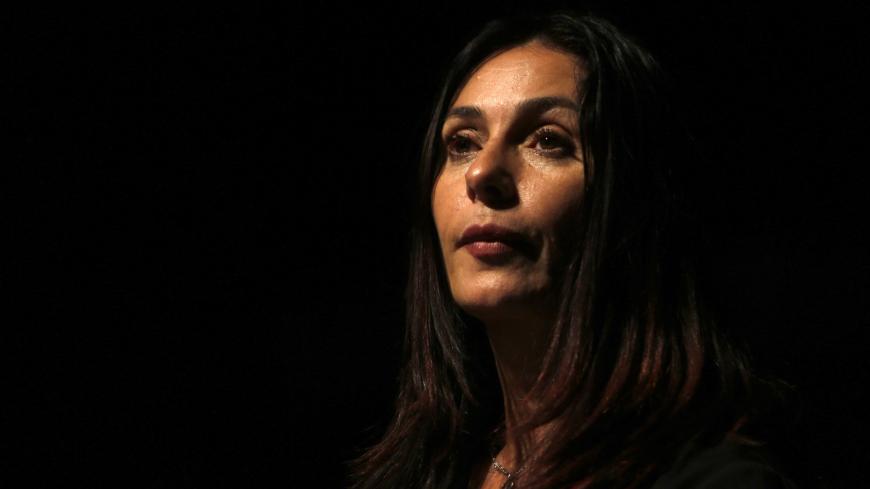 Israeli Minister of Culture and Sports Miri Regev speaks before the actors from Habima, Israel's national theater, at a performance in the Israeli settlement of Kiryat Arba, on the outskirts of Hebron, West Bank, Nov. 10, 2016. - MENAHEM KAHANA/AFP/Getty Images

The amendment to the Israeli law that regulates funding for theater and film productions, approved Oct. 21 by the government’s Ministerial Committee for Legislation, seeks to defund cultural institutions “undermining the state’s values and symbols.”

Leading Israeli theater and film personalities attended the protest, but the stars of Israel’s entertainment industry were glaringly absent. Maybe they find no fault with the economic sanctions the law would impose on theaters that stage plays casting doubts on Israel’s self-professed identity as both a Jewish and democratic state. Maybe they agree with the law’s sponsor, Minister of Culture and Sports Miri Regev, who argues that the taxpayer should not have to fund any play that gives off a whiff of incitement to racism or support for armed struggle and terrorism. Audiences certainly do not like texts that strike at the symbols of the state and its Independence Day, so why should leading song and entertainment figures get into a fight over the issue with the government funding committee?

Whereas the Nationality Law adopted this past summer (anchoring the Jewish nature of the State of Israel) strikes a blow to the soul of Israeli democracy, the cultural loyalty law shoots it directly in the heart. Repertory theater in Israel cannot survive without public funding. The new law hands control of this vital oxygen supply to a politician who prides herself on never having read Anton Chekhov.

The law would authorize Regev to decide, for example, that the adaptation by playwright and translator professor Avraham Oz of "The Merchant of Venice" constitutes incitement to anti-Semitism. On Oct. 25, Regev stood on the Knesset podium reprimanding opposition lawmaker Yoel Hasson of the Zionist Camp, saying he had not accomplished “even a quarter of what I have done, even a third.’’

Next week, if the Knesset votes its proposed amendment into law, Regev would have the power to cut a quarter, a third and even half the budget of every Israeli theater.

There is no guesswork involved in knowing Regev will use the law to muzzle Israeli theater. Regev, a former chief military censor, who when asked could not name a single film by Quentin Tarantino, is a harsh critic of the Israeli film industry. She was enraged by director Samuel Maoz’s internationally acclaimed film “Foxtrot,” which deals with the conduct of Israeli soldiers, without bothering to see it. The Israeli TV documentary “Megiddo,” which depicts the complex relationship between Palestinian prisoners and their Israeli jailers, also earned her harsh condemnation.

The screening of "Foxtrot" at the Venice and Toronto film festivals last year prompted Regev to issue a statement saying it was “inconceivable that movies which shame the reputation of the IDF [Israel Defense Forces] are those that are supported by the Israel Film Fund, which is supported by the state. And those are the films that are selected to showcase Israeli cinema abroad.”

Speaking at the protest against the new law, choreographer and dancer Renana Raz urged her colleagues to be willing to pay the price for protecting their right to express political views. Writer, playwright and filmmaker Moti Lerner was more explicit. “We must continue to deal with the occupation and the Israeli-Palestinian conflict,” he said.

Israeli filmmaker Udi Aloni found that of the 30 full-length feature films produced in Israel over the past three years or so, only "Foxtrot" and his own film "Junction 48" dealt with the Palestinian narrative. Artists “believe that with a bit of self-censorship and cooperation,” they can control the government efforts to rein them in, he wrote last year in a scathing Haaretz op-ed. “The Judeo-Israeli censorship has won a clear victory, not necessarily because of the establishment censorship’s horror shows,” he added, but because “the Palestinian narrative has been erased within the cultural discourse itself with the help of self-censorship.”

Oz, who lectures on theater at Haifa University and the Academy of Performing Arts in Tel Aviv, told Al-Monitor this week that Israeli theater had always practiced self-censorship and political theater has always been constrained by public consensus, ideologically committed to realizing national tasks. Playwright Hanoch Levin’s first forays into biting political satire in the 1960s were staged in basement, fringe theaters and thus generated limited reactions, he recalled. But when an established public theater such as the Cameri put on Levin’s iconic “Queen of the Bathtub” satire in 1970, mocking Israel’s euphoria over the 1967 victory in the Six-Day War, the Mapai regime (mother party of Israeli Labor) turned audiences against the theater. The poison spread to Cameri actors who demanded that management take down the play.

“’Queen of the Bathtub’ signaled creators and theater management the accepted limits of expression by political theater,” Oz noted. He added that the Haifa Theater decided not to stage the play “Ephraim Returns to the Army” by Itzhak La’or, which was banned by Israeli film censors at the time, even after the Supreme Court overturned the ban in 1987. (It was eventually staged by the Tzavta Theater that does not enjoy government funding.) “Political theater has turned into a dirty, subversive and dangerous term,” Oz concluded.

“Our creation is stronger than all the governments in the past and this government too,” Lerner declared at the protest. Recent experience shows his statement is somewhat inaccurate; the variety of plays proposed by mainstream theaters does not generate unease over the settlements. In August 2010, dozens of actors informed the country’s major repertory theaters that they would refuse to perform in the new cultural center built in the West Bank settlement town of Ariel. In a letter to the management of the Habima, Cameri, Beit Lessin, Beersheba and Khan theaters, actors expressed disgust with the intention to stage plays in Ariel and declared they would never perform in the occupied territories. Since then, Habima, Beersheba Theater, Beit Lessin, Hasifriya Theater, Orna Porat Children’s Theater and Israel’s Youth Theater actors have all performed in Ariel. Some even took the stage in the settlement town of Kiryat Arba adjacent to the Palestinian town of Hebron. The managers of Ariel and Kiryat Arba cultural centers can easily have their pick from a large offer of nonpolitical plays.

Theater actors, directors and playwrights, whose creations depend on public funding controlled by the government, will not be the salvation of Israel’s dissipating freedom of expression. Nor will salvation come from Israeli audiences trapped in the warm consensus over the right-wing ideological path; this is the audience that was moved to see its minister of culture tear up as the Israeli national anthem was played at a judo competition in Abu Dhabi last week.

The masses will only take to the streets on the day that singers and entertainment artists from Israel and around the world decide to stay away from the popular Eurovision song contest or from other performances taking place in countries who blindly follow censorship — countries like Israel.