Israel’s 'Loyalty in Culture' law spreads to other ministries

The spirit of the "Loyalty in Culture" law starts seeping into other government ministries, defunding cultural programs that criticize the government’s occupation policy. 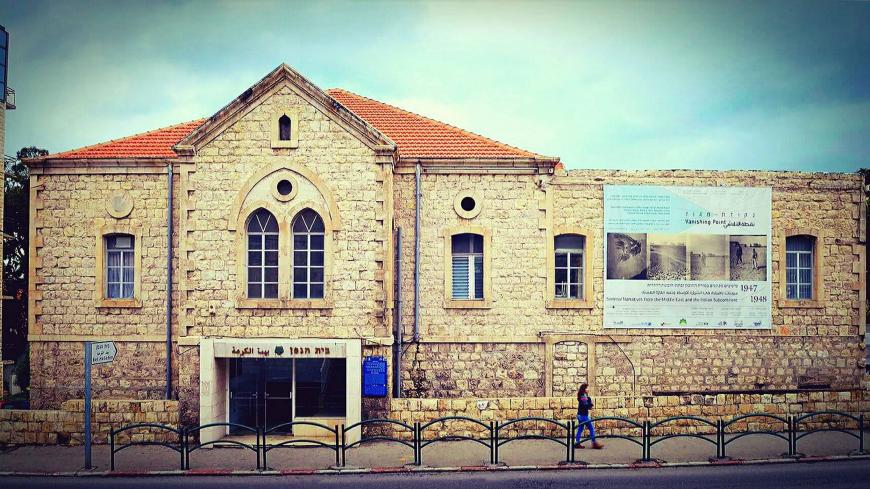 The Jewish-Arab Beit Hagefen Cultural Center, which hosted the Haifa Story Festival despite government funding being removed the day before its launch, Haifa, Israel. Seen in a picture uploaded July 8, 2017. - Facebook/Beithagefen

“In these tense times, when Israeli reality appears to be dividing and separating its citizens and residents, the city of Haifa continues to foster an identity of tolerance and values of coexistence.” This was how the Jewish-Arab Beit Hagefen Cultural Center described the Haifa Story Festival, a beacon of coexistence among the Mediterranean coastal city’s mixed population.

The eighth edition of the festival, held on Nov. 1-5, was themed “identity activism in Haifa.” It was open to all and free of charge, featuring such diverse activities as a tour of Haifa’s gay community, a screening of the film “A Trumpet in the Wadi,” which deals with Arab-Jewish relations (after Sami Michael’s novel), and a session on Ethiopian cuisine. Other performances and lectures dealt with identity on a more political level, such as the lecture titled “Who’s Afraid of Palestinian Identity?”

The festival’s promotional material stated clearly that it was being funded by the Ministry for the Development of the Negev and Galilee and was intended for residents of Haifa’s disadvantaged and peripheral communities.

Apart from the Ministry of Culture, various other ministries provide funding for culture and arts events relevant to the ministries’ focus. The commitment to fund the Haifa Story Festival, as well as its nature and diverse programs, were agreed on months in advance. However, on the day before the opening, the ministry informed festival organizers and the Haifa municipality that it was withdrawing its support. Haaretz reported that officials cited the fact that the festival was open to all and not just to residents of peripheral neighborhoods. The organizers decided not to protest the decision publicly and to hold the festival as planned.

A knowledgeable source told Haaretz that the ministry’s decision stemmed from political considerations. “What is sad in this case is that extremists in Israeli society have managed to influence the thinking and decisions of government ministries in a way that is not on point,” the source said.

A source at Beit Hagefen told Al-monitor that the budget was pulled out of political reasons. He insisted that the Ministry of Development was well-aware of the details of the festival, including the entry parameters, especially since the festival has been running in the same format for several years. The festival managers received no request for further information and no demand to change the entry procedures. "The festival was intended for the public at large; no one checked if the guests were from the peripheral neighborhoods or not. It would have been unfeasible. The entry issue was just an excuse for pulling the funding," the source said on condition of anonymity.

The minister for the development of the Negev and Galilee is the chair of the ultra-Orthodox Shas Party, Aryeh Deri, who also serves as the minister of interior. One can safely assume that Deri was not troubled by the planned Ethiopian cuisine festival event nor by the screening of the documentary “Pray the Devil Back to Hell,” about a Liberian women’s peace movement. What set him off were the events dealing with Palestinian identity.

The lecture on “Who’s Afraid of Palestinian Identity?” was clearly an explosion waiting to happen in the week when the Knesset approved the first reading of the "Loyalty in Culture” law and Justice Minister Ayelet Shaked demanded that Deputy Attorney General Dina Zilber be fired over her outspoken opposition to the law.

The contentious law now seems to be spreading to other government offices, inspired by Shaked’s colleague Regev, who authored it. This will make it hard for any event to receive government funding unless it conforms to official right-wing policy. Absent such funding, many cultural institutions are at risk of collapse. In other words, unless they pledge allegiance to the government, the government will not pledge funding. In Israel, with its relatively small culture market, survival hinges on government funds.

A cursory reading of the proposed law makes it sound logical: The government will not finance institutions or events that declare Independence Day as a Palestinian day of mourning (marking Palestinian "Nakba Day"), damage or dishonor the symbols of the state, negate Israel’s existence as a Jewish and democratic state, or incite to acts of terror, violence and racism.

However, all these conditions are subject to broad political interpretation. For example, Regev obliges all Israeli theaters to stage their productions in West Bank settlements, just as they do all over Israel. A theater or actor who refuses to perform in the settlement towns of Ariel or Kiryat Arba, for example, will be blacklisted and defunded although they are not inciting to violence, not negating the existence of the state nor defiling its symbols. Anyone refusing to accept the views of the settlers and their right-wing patrons, and insisting instead that West Bank territories are occupied Palestinian lands, will not be eligible for government budgets.

The Haifa Story Festival proves that even when there is no specific clause in the law that allows defunding, a technical excuse can always be found. In this case, the Ministry for the Development of the Negev and Galilee latched on to the fact that the festival was billed as open to all and not just to residents of peripheral neighborhoods. The festival managers explained that it was technically impossible to check every person for his exact address, but the ministry ignored this explanation.

The Ministry of Culture came up with a technical excuse, too, when it suspended the funding of the Arabic-language theater Al-Midan in Haifa in 2015 over the staging of the play "A Parallel Time," which is inspired by the story of Palestinian assailant Walid Daka. Regev ordered the budget suspended, and the theater’s resulting financial crisis meant it could no longer stage new plays and had to cut back its performances. In February 2018, the ministry announced it was pulling its support for Al-Midan because it had staged very few plays, effectively sentencing the theater to closure.

The persecution of artists and cultural institutions in recent years has led theater managements to censor themselves to avoid risking their funding. Plays of a critical, political nature have bowed out. In 1970, Cameri Theater staged “Queen of the Bathtub” by playwright Hanoch Levin, a highly controversial play sharply critical of Israel’s euphoria over the Six-Day War. These days it would probably not be willing to stage a play about the “right-wing’s euphoria” over its political and ideological achievements.

The current repertoire of Israel’s two largest theaters, Cameri and Habima, is unlikely to anger anyone in the Ministry of Culture or in any other government ministry. The theaters will not risk alienating audiences either, some of whom may boycott them for taking a stand deemed “immoral” or “anti-Israel.” The two theaters are staging musicals and classical plays, such as “Who’s Afraid of Virginian Wolf” or “Othello” — anything that does not run the risk of annoying anyone.

This month, the Beit Lessin Theater is staging "Oslo," which has received critical Broadway acclaim. It deals with the behind-the-scenes negotiations on the 1993 Israeli-Palestinian Oslo peace agreements considered by the political right an act of treason by Prime Minister Yitzhak Rabin who signed them. It would come as no surprise if the Ministry of Culture were to suddenly find a technical reason to pull funding for the institution lest it expose Israeli theater lovers to the idea that there was once hope for peace.