Daniel Bar-Tal and Izhak Schnell have assembled articles by more than 20 Israeli researchers who describe the negative effects of the occupation and their impact on Israeli society. 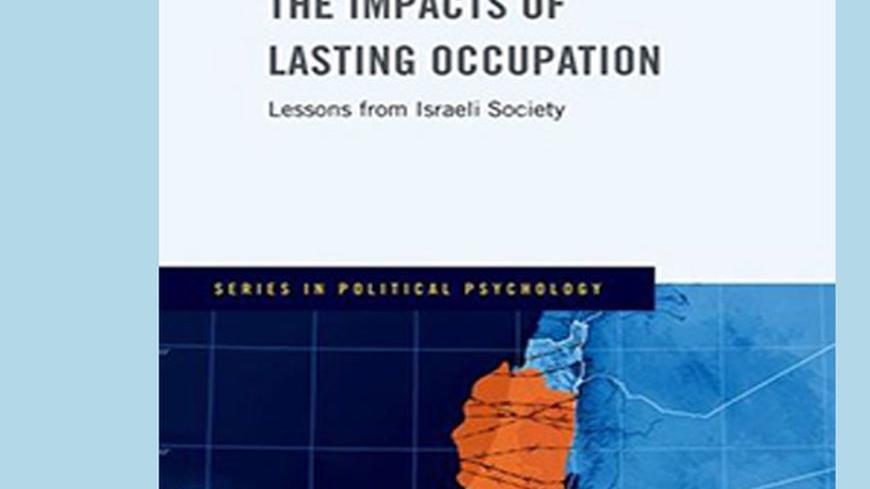 A new book, "The Impacts of Lasting Occupation: Lessons from Israeli Society (Series in Political Psychology)," maps the various layers of the ramifications of Israeli control over the territories. - global.oup.com

People wandering around the streets of Jerusalem these days cannot avoid noticing the giant posters in which the word “Judaize” takes up a large amount of space. Bulletin boards greet everyone with provocative banners screaming, “Cock-a-doodle-doo Muezzin.” These messages — signaling encroachment on, and humiliation of, the Palestinian citizens of Jerusalem — are the highlights of the “United Jerusalem” List’s election propaganda. The list is headed by Shmuel Shakdi, a right-wing activist, and Aryeh King, who channels his energies into injecting settlers into the Palestinian neighborhoods of the city.

While we might be tempted to dismiss this anti-Arab propaganda as the kind of marginal ultra-nationalistic phenomenon that exists all over the world, it is hard to ignore that both of Jerusalem’s mayoral candidates share close ideological stances. The two candidates for leadership of one of the most complicated and explosive cities in the world are Nir Barkat, the incumbent mayor, and Moshe Leon, who heads the Likud-Beiteinu faction. Barkat, who recently boasted about his participation in the inauguration ceremony for the new settlement in Jabal Mukhaber, has won the support of the left-wing Labor and Meretz parties. Leon, former Foreign Minister's Avigdor Liberman’s personal emissary, is making efforts to ‘pass Barkat on the right’ and even publicly hugs King and his partners.

How has the important election campaign for running Jerusalem become an inner right-wing battle? The demographic processes taking place in the city in the last decades do not provide the full picture. The explanation belongs outside Jerusalem’s municipal borders.

A report conducted by researcher Halleli Pinson reveals that the revised version of Being Citizens in Israel, a civics textbook used to prepare students for the matriculation exam, strengthens the structuring of the ethnic-national discourse as the main, and even only, discourse among Israel’s youths. According to this book, Israel’s definition as a Jewish state precedes that of a democratic state.

At the same time, the differences of approaches between left and right on subjects such as the future of the territories that Israel took control of in June 1967, the fate of the settlements and the treatment of the Palestinians, are deepening.

Idan Yaron, a sociologist who has spent the last three years observing day-to-day life in a normative high school in the center of the country, said in an interview with the Israeli daily The Marker that “the students think that being left-wing is almost worse than being an Arab.”

This polarization is another byproduct of the occupation. A new book, The Impacts of Lasting Occupation: Lessons from Israeli Society (Series in Political Psychology) that is due to be released in the coming days by the Israeli Political Science Association, maps the various layers of the ramifications of Israeli control over the territories.

This book, reviewed for the first time here, is a collection of articles assembled by Daniel Bar-Tal and Izhak Schnell. The articles were written by more than 20 Israeli researchers, each of whom is an expert in his or her sphere, creating a broad and unique mosaic. Thus, by spotlighting the various aspects of the occupation, we see how control over the territories has affected the occupying society. The two editors summarize the situation in their own words in the epilogue, saying that this occupation has become a central component in restructuring the Israeli identity and the Israeli regime.

Forty-six years after Yeshayahu Leibowitz predicted that the occupation would corrupt Israeli society, Marcelo Daskal (former dean of Tel Aviv University’s Faculty of Humanities) asserts that an occupying society is destined to convert the value of respect for the other to chronic suspicion. Daskal notes that suspicion and distrust are strongly connected to denial, contempt, humiliation, disrespect, discrimination, misanthropy, guilt and de-humanization of the other and of the self. These changes, he argues, cause the fragmentation of a society’s moral texture, followed by a process of moral decline.

Psychologists Charles Greenbaum and Yoel Elitzur describe the effect of military government in the territories on the soldiers who participate in policing missions and oppression of the civilian population. They present studies attesting to the fact that most acts of violence did not take place in the course of direct fighting with armed agents, but as revenge or attempts to “educate” the population or “urge” them to cooperate with the Israeli authorities. Two senior researchers, who served for many years in relevant functions of the Israeli Defense Forces Reserves, cite that the IDF avoids investigating these issues due to political calculations disguised by rationales of “field security.” In certain cases, they note, the army even chooses to deal with such inquiries by dismissing the investigators.

Alongside the moral and ethical price, the book also portrays the social-economic aspects of the occupation enterprise. Economist Shir Hever distinguishes between three time periods. In the first period, from 1967 to 1986, the occupation was economically lucrative for Israel. In the second period, from the eruption of the first intifada (1987) until 2004 (“resistance period,” in Hever’s words) the situation reversed itself. Israel’s control over the territories became a financial burden, and it became questionable whether Israeli society could cope with it. The third period (“privatized occupation”) is characterized by the flourishing of private companies that specialized in producing products for “the homeland's protection” and exporting them around the world. According to his estimated assessments (due to an intentional, consistent policy of concealing the budgets transferred to the settlements by the authorities), the cost of the occupation by 2008 had reached the immense sum of more than NIS 380 billion [$107 billion] after deducting revenues.

Similar to the socioeconomic and demographic reality, the public perspective of the occupation has gone through a number of changes. Dan Urian, associate professor in Tel Aviv University’s Department of Theater Arts, gives an overview of how the occupation is expressed in Israeli art. Urian describes the evolution of the cultural repertoire: Until the mid-1980s, members of Israel’s political center ignored the occupation and related to the territories as a “political trust maintained by Israel until the attainment of a political settlement.” Here and there were even echoes of “enlightened occupation.” Since then, artists began to focus on the difficult and damaging reality enforced by the occupation on the occupying nation.

Editors Bar-Tal and Schnell present their conception of the occupation in the book’s concluding chapter, “Process of Creeping Annexation via Ethnicization or Judaization of the territories.” This perspective, which had formerly been held by a marginal minority of the nation, became the majority opinion in recent years in the academic world.

Nevertheless, the book’s innovation is not in its answer to the question, How does the occupation affect society? The answer may be summarized in two words that have long since become a cliché: Occupation corrupts. Instead, the uniqueness and importance of the collection lies in the broad, extensive description of the “how”: how corruption takes place and how it affects almost every aspect of the life and identity of the occupying society, to the extent of transforming it into a new Israeli identity. This important book, as well as the political reality reflected in Jerusalem’s election campaign, should serve as an additional warning sign for those Israelis who, like most of the experts who contributed to the book, want to preserve Israel’s democratic and moral identity along with its Jewish and liberal values.